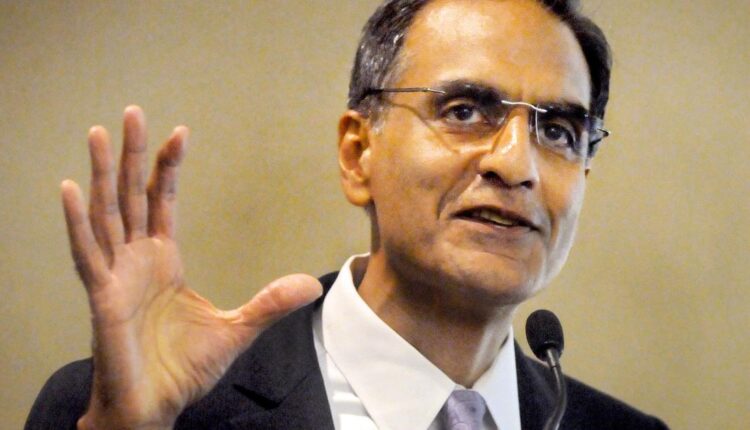 JOHNSTOWN, Pa. – For Richard Verma, Westmont Hilltop School District served not just as a place for education, but also an incubator for important lessons.

“It was where we learned so much,” he said, “not just about academics, but about life, teamwork, loyalty, friendship.”

Verma’s parents are Indian immigrants who moved to the area from Canada in 1971, when he was 2 years old, after the University of Pittsburgh at Johns-town offered his father a job.

Verma served as US Ambassador to India under President Barack Obama.

The Westmont graduate said the community welcomed him, his parents and siblings with open arms.

“Being an immigrant family, being taken in … and being supported makes our experience particularly special,” Verma said.

He credits Westmont with providing him an area to grow and learn. Verma commended the educators and coaches who supported him throughout his time there.

“Just an outstanding set of educators, who didn’t just teach you about schoolwork, which was obviously important, but they taught you about standing up for each other and supporting each other,” Verma said, “that sense of partnership and community that you don’t necessarily get in other districts and other schools.”

Verma is one of many who have created a distinguished career after leaving the hallowed halls in the West Hills.

It is the Westmont Hilltop Alumni Association’s job to keep up with them while providing for current and future students of the district.

Bill Hargreaves, president of the organization, has been involved essentially since the beginning.

He’s a 1994 graduate of the district who, upon moving back to the area roughly 10 years ago, wanted to give back.

“I felt like, when I was a student, there was a real sense of community and pride,” Hargreaves said.

Through his participation in the alumni association, he looks to continue to foster those values ​​in others.

The alumni association exists to help students of the district.

“The mission of the organization is to raise funds to give back to students and increase camaraderie among Hilltoppers,” according to the group’s information.

The alumni association provides an annual scholarship to one male and one female graduate, up to $700 apiece, and provides grants to certain student activities.

Hargreaves said the group recently donated $1,400 to the cheerleading boosters, who are using the funds to purchase a new floor mat – and the alumni have given funding to help activities such as theater club, STEAM and the yearbook club in the past.

School groups have to apply to be considered for the grants.

The association also started an annual distinguished alumni award, although the COVID-19 pandemic put a stop to that for the past few years.

On Sept. 23, at the next dinner, Hargreaves said the group will honor three distinguished graduates: Richard Hodos, vice chairman of the New York tri-state region retail services team with CBRE; best-selling narrative history author Russell Shorto; and Ann Yerger, a senior adviser for Spencer Stuart and board member for Bed, Bath and Beyond.

The next day, the annual “All Class Reunion” will take place at The Boulevard Grill.

Anyone wishing to join the association can visit the group’s Facebook page for more information.

One of the first recipients of the alumni award was Cambria County Judge Linda Fleming, who graduated from Westmont in 1981.

She said the honor was a sincere privilege, and she credits the experiences at Westmont Hilltop with leading her down her professional path of law.

Fleming said that from the time she was in fourth grade until high school, she wanted to be a pediatrician. In fact, she had been accepted into Penn State’s pre-med program.

But during her junior year, she started participating with the forensics group.

“I did persuasive speaking and enjoyed it, and I was pretty good at it,” Fleming said.

Fleming enjoyed forensics so much that she began wondering how to make a career out of that because she loved public speaking. That year, she switched to pre-law.

Now in her 13th year on the Cambria County bench, Fleming said she believes her alma mater read her for a productive future.

“I thought that I was very prepared for college leaving Westmont,” she said.

Specifically, Fleming thanked her teachers from nearly every grade for being understanding, knowledgeable educators.

“I have fond memories of so many of my teachers,” she said.

“They were really mentors to all of us.”

Fleming added that she grew up in a household where education and hard work were valued and that these merits were echoed and strengthened at Westmont Hilltop.

Other district graduates who have made names for themselves include retired US Army Lt. Col. Dan O’Sullivan and Josh Miller, a telecommunications engineer at the NASA Jet Propulsion Laboratory in Pasadena, California.

Although the pair graduated nearly 50 years apart, they both share a fondness for their old school.

O’Sullivan quoted classmate Phil Newbaker in describing his experience in the district, stating it was “growing up in the best of places in the best of times.”

He recalled fond memories of the Stutzman School playground, serving six years as the manager of the junior and senior basketball teams, and working as a stage manager during high school.

The 1960 graduate and Vietnam War veteran is active in keeping his class connected and helps to plan reunions and produce newsletters, as well as contributing to a scholarship program.

Miller noted that his time at Westmont prepared him for “an academic and professional career that enabled me to have my hand in putting hardware on Mars and the Moon.”

“It’s a testament to the district to look back and see how many of my peers have gone on to do great and extraordinary things – like become scientists, engineers, doctors, entrepreneurs, international missionaries,” Miller added.

“You name it and someone from Westmont has probably done it.”

What he most appreciated in the district was the relatively small class sizes that afforded him “flexibility, opportunity and encouragement” from many teachers to explore offerings outside the classroom and through the regular curriculum.

Miller also said that the lessons were always well-rounded and presented by enthusiastic teachers.

O’Sullivan said the biggest life lessons he learned during schooling was to be himself and enjoy others based on who they are, how they act and what they do, not their background.

Those values ​​carried him through a two-decade career in the military, teaching college classes and volunteer work.

He showed his appreciation recently by purchasing a flagpole brick at the newly redesigned Price Field.

O’Sullivan said he did so to “commemorate the fond memories I and my classmates have of time spent on the field.”

“I still cherish the days of my youth spent ‘on the hilltop,’ ” he added.

While enrolled in the district, Verma played on the school’s ice hockey and baseball teams and participated in the choir and musicals.

He now resides in Washington, DC, with his family where he works as general counsel for Mastercard, a position he’s held since 2020.

Prior to that, he was the assistant secretary of state for legislative affairs.

Verma was recently chosen by President Joe Biden to serve on the President’s Intelligence Advisory Board.

He still visits Westmont frequently and says his family loves stopping by the community.

Verma joked that if he asks his children where they want to visit, out of anywhere, they say Westmont.

“So much of what I learned in Johnstown, and Westmont in particular, I’ve passed on to my kids,” he said.