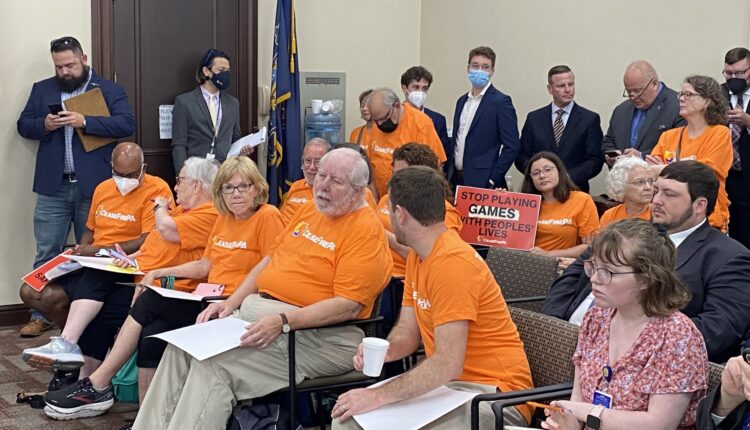 We cannot wait any longer to disarm hate | Shira Goodman

We have witnessed time and again the deadly combination of hate, belief in conspiracy theories, extremist rhetoric and guns. A gurdwara in Oak Creek, a church in Charleston, synagogues in Squirrel Hill, Poway, Colleyville, a nightclub in Orlando, shopping centers in El Paso and Buffalo. It is a simple fact — extremists armed with deadly firepower are terrorizing our communities.

We should all have the right to pray, work, learn and play in safety. But we are deprived of this right by the deadly combination of hate, online spaces where hate is learned and amplified, and the proliferation of and easy access to firearms. Alone, each of these factors is powerful and dangerous; together they create a perfect storm that almost inevitably leads to horrific and fatal tragedies.

According to ADL data, extremists overwhelmingly use firearms to carry out their deadly attacks.

We are a nation of problem solvers, and we know how to solve this problem. It will take effort, compromise, clearly defining our priorities and will. It won’t take new discoveries or science we haven’t learned yet, excessive resources, or untested solutions.  We have the data, we know what to do.  We can make online spaces safer places; we can engage big tech in the fight against hate; we can make those who hate less dangerous by limiting access to deadly weapons. In short, even if we cannot eliminate hate, we can disarm it.

As ADL wrote after Buffalo, tech companies bear responsibility for serving as algorithmic megaphones for extremists to promote hateful ideologies and as tools to plan violent attacks.

There are solutions, and big tech companies must do their part. These companies must adopt published community guidelines or standards that address hateful content and harassing behavior, clearly define consequences for violations, and enforce these policies consistently and equitably.

Technology companies must consistently produce transparency reports that include data from user-generated, identity-based reporting. Governments must carefully reform, not eliminate, CDA 230 to hold social media platforms accountable for their role in fomenting hate. Reform must prioritize both civil rights and civil liberties.

The measures in the Bipartisan Safer Communities Act – while far short of what is needed — will help keep guns out of the hands of extremists fantasizing about the next big attack.

Extreme Risk Protection Orders are proven to work — in many states across the country, red and blue, they are already being used to temporarily keep guns out of the hands of those at risk of harming themselves or others.

This tool has been used to disarm extremists. A federal program to incentivize states to enact such a law is less than we need but a start on the way to using data-driven solutions to solve this problem. The swift passage of this gun violence prevention legislation, particularly coming as it did the day after the Supreme Court’s dangerous decision in Bruen, is something we should all be proud of.

Prior to joining the fight against hate at ADL, I worked for seven years in the gun violence prevention movement. I have spoken, marched and advocated with many survivors —people who are working every day to spare other families the pain they suffer. And I know that the attacks on our communities, the harm and havoc wreaked by gun violence — have broad ripple effects and wide-ranging impact.

We cannot measure the damage by counting only the lives lost or forever changed by devastating injuries and trauma and the pain suffered by survivor families. Hate crimes always have broad impact: whole communities who no longer feel safe, who know they can be targeted by haters who can buy and carry assault weapons and thousands of rounds of ammunition with impunity.

I traveled to Pittsburgh the day after the deadly attack at the Tree of Life synagogue. Those days are seared in my memory.  It took time to feel safe after that attack on my community. What made a difference was the support of other faith communities, the brave survivors of gun violence, and people across the nation who offered their friendship and solidarity.

But what we need now just as surely is action by those in power. It is way past time to do what is right. We cannot be deterred by false arguments that the First or Second Amendments make solutions impossible.

We cannot accept inaction because action will not prevent every act of hate or every gun death. We should never accept as normal that people at prayer, at school, at work, at the market, at a night club – people who are exactly where they are supposed to be – can be brutally gunned down because someone hated them because of their religion, race, ethnicity, immigration status, or some other monstrous conspiracy theory.

We must protect our communities from hate-fueled violence, which when combined with guns will always be deadly. We cannot wait any longer to disarm hate.

Opinion contributor Shira Goodman is the director of campaigns and outreach for the Anti-Defamation League. She writes from Philadelphia. Her work appears frequently on the Capital-Star’s Commentary Page.

To help our children reach a successful future, we need to boost Level Up funding | Opinion