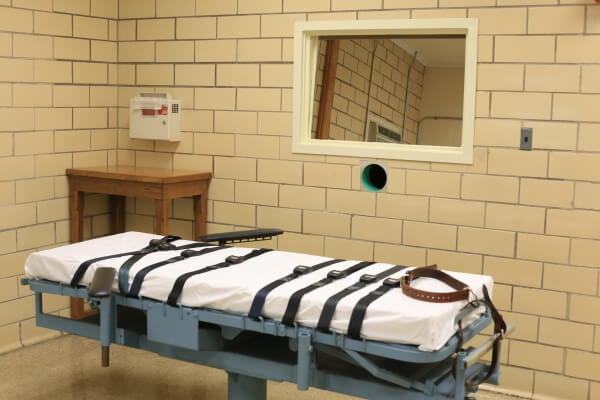 It is this compassion for the loved ones left behind that drives opposition to the death penalty. The wishes of victimized families are frequently ignored in the prosecution’s zeal to seek death.

In Virginia, 26 murder victim family members signed on to abolish the death penalty, according to the advocacy group Virginians for Alternatives to the Death Penalty, after enduring years in and out of courtrooms. In their words, the death sentence brought no peace and dragged out their pain and uncertainty, frequently for decades. In the 2021 General Assembly, eight legislators related to murder victims all voted to abolish the death penalty.

While rogue states such as Iran, Saudi Arabia and North Korea carry out crude and violent executions publicly, they frequently happen in the United States as well, described as “botched” but occurring under veils of secrecy.

Hanging, with its 3.12 percent botch rate, according to author and Amherst College professor of jurisprudence Austin Sarat, became the most common form of execution starting in 1622. Many failures, including broken ropes, strangulations and accidental decapitations, were recorded by the press.

By the second decade of the twentieth century, most death penalty states had abandoned the gallows and switched to the electric chair. Problems with the chair due to mechanical failures and human incompetence started with the 1887 electrocution of William Kemmler in New York and doggedly continued into the late 1990s.

In 1991, Virginia penitentiary physician David Barnes put a stethoscope on the hot, blistered chest of inmate Derick Peterson after the first jolt of about 2000 volts and stated, “He has not expired.” Four minutes later, a second check showed Peterson was still alive. A second cycle had to be applied to finally kill him.

Aware of the bad press botched electrocutions generated, states looking for a safer and more clinical way to execute shifted to lethal injection (LI), starting in the late 1980s. Virginia switched to LI in 1994, with a protocol of sodium thiopental (then midazolam) as a sedative, then rocuronium bromide as a paralytic, followed by potassium chloride to stop the heart.

While LI generally made executions more palatable to witnesses, a high botch rate of 7.2% (according to Sarat) is partly attributable not to mechanical failures but to inmates who are former drug users, inactive or overweight, or suffer from cancer or cardiovascular diseases.

These factors combine to make veins difficult to locate by frequently unqualified prison personnel. In January 1996, personnel at Greensville Correctional in Jarratt, Virginia struggled for 22 minutes to locate a suitable vein in Richard Townes, Jr. After numerous punctures, the needle was finally successfully inserted in the top of Townes’ right foot.

Alabama has a particularly wretched track record with LI. A private autopsy after the July 2022 lethal injection of Joe Nathan James Jr. revealed that James was subjected to a torturous three-hour-long process by unskilled corrections personnel trying to find a suitable vein.

With LI drugs increasingly difficult to obtain, states that insist on retaining their death penalties are backsliding into execution methods of previous centuries.

Alabama, Arkansas, Florida, Kentucky, Mississippi, Oklahoma and Tennessee still retain the electric chair as a secondary method behind lethal injection. South Carolina is unique in that it reserves the chair as the primary form but has introduced the firing squad as an alternate.

A judge, however, ruled both methods unconstitutional, kicking it to the state’s Supreme Court. Another seven states reserve lethal gas and its 5.4 percent botch rate as an option.

Virginia, and now Oregon, may be described as the bookends to execution abolition across the United States. It’s past time for other states to follow suit.

Dale Brumfield is the former executive director of Virginians for Alternatives to the Death Penalty and the author of “Closing the Slaughterhouse: The Inside Story of Death Penalty Abolition in Virginia.” He wrote this piece for the Virginia Mercury, a sibling site of the , where it first appeared. Readers may email him at [email protected].