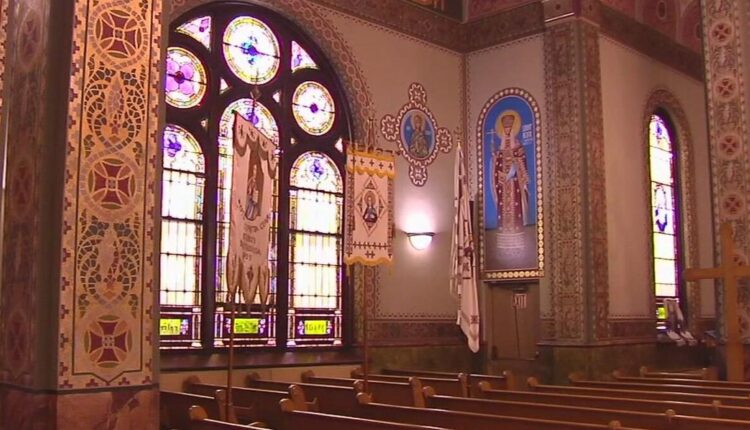 We’re hearing reaction from people who have Ukrainian heritage who also have a connection to the Lehigh Valley. They’re concerned as Russian forces continue to carry out military operations in the country.

The words “Pray for Ukraine” hang for drivers to see in downtown Allentown outside St. Mary’s Ukrainian Orthodox Church. Inside, Father Richard Jendras told us he’s devastated by what he’s seeing happening in his ancestral homeland.

“The last 24 hours has been very unsettling. It’s been very disturbing. I feel like my heart is broken,” said Father Jendras.

Father Jendras showed us on a map where some of his family members live, in the western town of Ternopil. He’s worried about their safety.

“You would have thought that we were beyond this. We’re going back to the days of World War II,” said Father Jendras.

But there are also people with connections to the Lehigh Valley right in the middle of the country becoming a war zone.

“We can hear the shelling at night, just like we did in 2015,” said Alina Beskrovna.

Beskrovna got her MBA in Finance at Lehigh University in 2017. She now lives in the eastern Ukrainian city of Mariupol.

“I’ve been interpreting, translating, going to the front lines with the international media,” said Beskrovna.

Beskrovna said she is not planning to evacuate, and many of her countrymen are staying as well.

“I don’t see people evacuating. I do see people organizing,” said Beskrovna. “Hunters are getting together and discussing on when to meet, where to meet, and how to use the weapons designed for hunting should something happen.”

Back in Allentown, Father Jendras said he’s inspired by what he’s seeing from people like Beskrovna.

Father Jendras said he’s organizing group prayer with other pastors. He said the next prayer session for Ukraine will take place at the Assumption of the Blessed Virgin Mary Church in Northampton next Thursday.

‘These are human beings.’ How Pa.’s Ukrainian community is responding to Russian invasion

KHN’s ‘What the Health?’: Contemplating a Post-‘Roe’ World