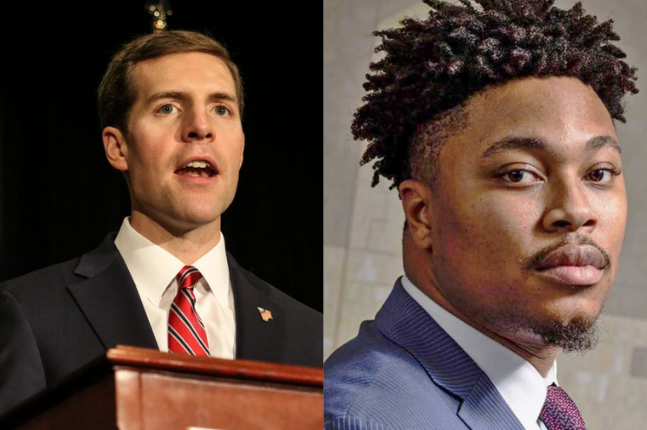 Two of the Democratic candidates vying for their party’s nomination to fill Pennsylvania’s open U.S. Senate seat faced off in their first debate Sunday afternoon, with a looming absence from the third contender in the upcoming primary.

The crowded — and costly — race to fill the seat currently held by retiring U.S. Sen. Pat Toomey, a Republican, is viewed as one of the few chances Democrats have to gain a seat and build on what’s now a narrow majority in the upper chamber.

And while the candidates have participated in forums over the last few months, this was the first time they went head-to-head while defending their platforms next to each other on stage.

Lt. Gov. John Fetterman did not participate in Sunday’s debate, prompting accusations from Lamb and Kenyatta ahead of the forum that Fetterman is avoiding having to defend his record and questions about a 2013 incident where he confronted an unarmed Black man with a shotgun.

Those accusations made their way to the stage, where an empty podium stood while Fetterman made campaign stops in Bedford, Chambersburg, and Gettysburg. Debate organizers said his campaign did not provide a reason for not participating in the event.

“He didn’t respect you enough to show up today,” Lamb told the audience. “But we need to have an honest, family discussion among democrats about what we’re doing here.”

Kenyatta, answering a question about a lesson that shaped him into who he is now, said showing up is part of the job.

“He’s not here,” Kenyatta said, motioning toward the empty podium. “And if John can’t show up to talk to other Democrats about the importance of this race, about what he would do as our next United States senator, who the hell really believes that John is going to be able to show up and stand up and fight for our values in Washington?”

The candidates touted their legislative experience, reflected on instances where they made an error in judgment, and referenced times when they worked with their Republican colleagues to pass bipartisan legislation.

Lamb referenced a comment he made to reporters after the 2018 shooting at Marjory Stoneman Douglas High School in Parkland, Florida, saying that he didn’t believe gun law reform was the answer to address violence.

“It wasn’t fully accurate of what I believe,” he said.

Kenyatta brought up his support for Marsy’s Law, which is an amendment struck down by the state Supreme Court that would expand rights for alleged crime victims.

“In a rush to support victims, I supported a bill that I think had a lot of challenges in terms of how we actually implemented that legislation, whether or not we could implement it, and whether or not it was the right tool to deal with the challenges that we all know exist,” he said.

To address student debt, Kenyatta urged canceling student debt and doing the “hard work of making sure college is more affordable in the first place.” He added that at least two years of community college should be free.

Lamb’s strategy included lowering the cost of college, and he used the opportunity to attack Fetterman, saying: “What have you ever done?” He added that he supported efforts to “persuade” the White House to postpone student loan payments during the COVID-19 pandemic.

The candidates agreed that the U.S. Senate plays a role in foreign affairs, specifically in the Middle East.

Both agreed that Congress should debate and be transparent when making decisions about war. They stressed the importance of being open about military allocations and funding allocations. They also supported allowing Puerto Rico residents to decide whether they should be granted statehood.

Kenyatta said Lamb votes with former President Donald Trump 70 percent of time time. In response, Lamb accused Kenyatta of campaigning “like a Republican.” However, the biggest divider between the candidates was their approach to fossil fuels and transitioning to clean energy.

Kenyatta said that while nuclear power plays a role in transitioning toward a carbon-free future, Congress should focus on passing plans like the Build Back Better Bill, which died in the U.S. Senate after it lost the support of a key Democratic lawmaker. He also said that job losses during energy transitions are related to companies making economic decisions.

“We are transitioning to a cleaner, greener future because we have to,” Kenyatta said, adding that he is “going to fight for a just transition.”

Lamb, however, said that he brings the perspective of people who have been affected by job losses, saying that if a candidate talks about a “just transition,” Pennsylvania voters are “going to vote for the other guy.” He defended fracking as an opportunity to create jobs and lower bills.

“This is part of your economic survival. And what we owe as policymakers is not the simple-minded — ban it or don’t ban it,” Lamb said. “We owe it to you to give you the maximum benefit from natural gas while lowering the cost as much as possible, taking care of the groundwater issue, making sure we bring more transparency and oversight.”

Despite their difference of opinion, Lamb gave Kenyatta credit for being clear in his stance — something he said Fetterman is not.