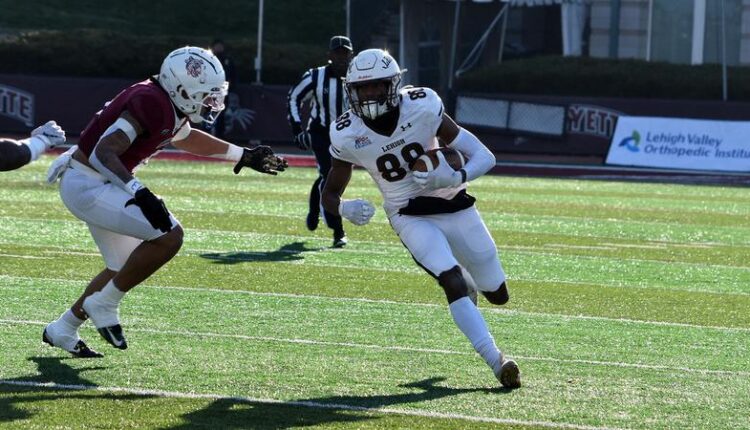 EASTON, Pa. – Two early big plays for the Lafayette staked the host Leopards to an early 14-0 lead and while Lehigh battled back and statistically dominated, the Mountain Hawks fell 14-11 Saturday in the 158th meeting of college football’s most-played rivalry at Fisher Stadium .

Those two scores in the first eight minutes would be the only points of the game for the hosts. Lehigh got on the board with a 27-yard Dylan Van Dusen field goal with 4:57 left in the first half and added a touchdown pass from Dante Perri to Eric Johnson, but the Mountain Hawks failed on four plays from the Lafayette 15 yard line late in the game but couldn’t punch in the go-ahead score.

Lehigh held a 404-180 advantage in total offense, including a 343-56 edge through the air. The Mountain Hawks had 27 first downs to the Leopards’ nine.

Perri completed 29-of-57 passes for 343 yards with a touchdown and an interception. Seven of the completions went to Johnson, who gained 108 yards to go along with his fifth touchdown of the season. First-year Geoffrey Jamiel added 91 yards on seven receptions.

Shaeffer had eight tackles, two quarterback hurries and a fumble recovery to go along with his interception return touchdown. He was voted the game’s most valuable player.

“Two big mistakes in the first quarter and that’s all they needed,” Lehigh head coach Tom Gilmore said. “Which is really frustrating because we moved the ball pretty well throughout the game, but we didn’t finish drives. It was not finishing drives, giving up maybe a handful of plays on the defensive side of the ball and the most bizarre punting game we’ve seen.”

Lehigh’s opening drive stalled on the Lafayette 38 and Lafayette needed just five plays to go 92 yards on its first possession as Curtis broke free on his 71-yard touchdown run. Four plays into Lehigh’s next drive, Shaeffer intercepted Perri’s screen pass attempt and raced 50 yards for a touchdown to put Lafayette up 14-0 with 7:02 left in the opening quarter.

The Mountain Hawks trailed 14-3 at halftime and had a 10-play, 82-yard drive late in the third quarter end on a missed field goal.

After a Leopard 3 and out. Lehigh moved 50 yards in nine plays to score his first touchdown of the day. Perri hit juniors Connor Kennedy and Jack DiPietro to move the sticks on third and long and finally put the ball in the end zone on a 13-yard pass to Johnson, who made a one-handed grab in the near corner of the end zone. The two point conversion failed and Lehigh trailed 14-9 with 12:06 to play.

Lehigh got the ball back with 5:36 to play and moved deep into Lafayette territory thanks to a 37-yard completion to senior Jalen Burbage. Four consecutive pass plays fell short, including a 4th-and-10 that was broken up by Malik Hamm.

“We had an opportunity at the end of the game but credit to Lafayette, they had great pressure on us, but we still have to be able to execute and get it done,” Gilmore said.

Lafayette took a safety with 14 seconds remaining but Lehigh’s last-gasp effort to get into field goal range was unsuccessful.

EXTRA POINTS… Lafayette’s win was its first over Lehigh with a full crowd in the stands since 2006… this is also the first time since 2003-2004 that either Lehigh or Lafayette failed to have a streak of two or more wins in the series… senior TyGee leach led Lehigh with seven tackles and three tackles for loss… the Mountain Hawks were held without a sack for just the second time this season… Lehigh rushed for 61 yards, with sophomore Gaige Garcia leading the way with 48 yards on 17 rushes.

No. 13 Lehigh Falls at No. 17 Pitt as Panthers Rally in Upper Weights

Lafayette Holds on to Early Lead, Tops Lehigh in 158th Edition of The Rivalry