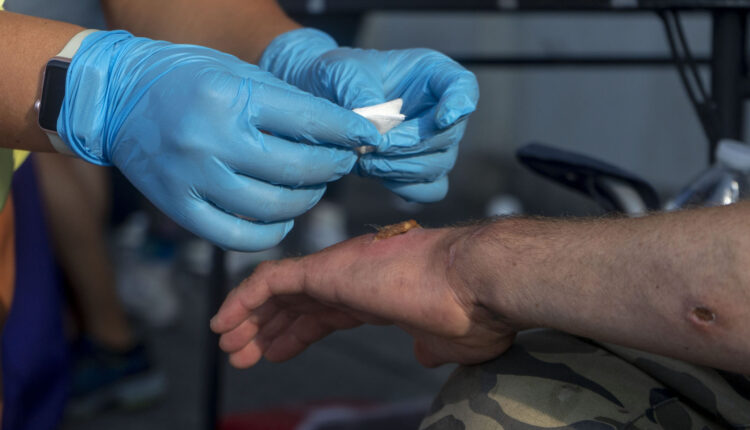 ‘Tranq’ isn’t just a Philly problem. But it will take city officials, healthcare workers to fix it

Julia Filomeno, a nurse in Philadelphia for six years who volunteers at the Savage Sisters Recovery outreach, putting an additional piece of gauze on a person’s wound after she had put another pice of gauze dipped in medical honey on it on E. Allegheny Ave. in Kensington, Philadelphia, PA on 8/2/22 (Capital-Star photo by Daniella Heminghaus).

PHILADELPHIA —  One block away from Kensington Avenue “A.” sat in a wheelchair after having recently gotten out of the hospital.

Doctors at Temple University Hospital told her that if she had waited to come in one more day she would’ve lost her leg. The doctors drained her wound and gave her medication to help it heal.

“It’s terrible. My leg was looking really good when they discharged me … and the second I was back out here, it got infected all over again,” said the woman, who was granted anonymity to speak candidly about her experiences.

She kept her leg covered in gauze, then an ace bandage followed by a thick, knee-high sock to keep it clean and bug-free — but to little avail. The wound, she said, was from a drug called “tranq.”

“Tranq,” or xylazine, is an animal tranquilizer with muscle relaxant and analgesic properties used by veterinarians and is not approved for human use. When people use xylazine it acts as a central nervous system depressant and can cause a slower heart rate, low blood pressure, and slower, more shallow, breathing, according to the U.S. Centers for Disease Control and Prevention.

This is why Savage Sisters Recovery, a non-profit harm reduction organization in the Philadelphia area, has started bringing oxygen tanks to their outreaches.

The organization has tried to stay on top of things by carrying oxygen tanks at their outreaches and doing overdose reversal training with the updated xylazine information, Executive Director Sarah Laurel, told the Capital-Star.

Laurel said she and her team still use the overdose reversal drug Narcan when handling overdoses, because xylazine has been found alongside cocaine, heroin, and fentanyl.

With the state House’s approval of a bill decriminalizing fentanyl testing strips – something both Philadelphia and Pittsburgh did in 2021, Laurel said there are parts of the bill that have been left open for additional drug checking. She said she hopes this “brings in xylazine drug-checking,” because there is not a testing strip for xylazine out, and “we need to develop that, we need to get that out and yes, we need to test our [stuff] for fentanyl.”

Laurel also said she is concerned about xylazine’s continued flood into Philadelphia’s drug supply, and the street-level issues it causes “based on the lack of public health resources.”

This includes not meeting it at an “acute withdrawal stage,” she said.

Acute withdrawal is the stage directly after a person stops using and causes physical symptoms like muscle aches, nausea, vomiting, tremors, and fatigue. It can also include anxiety and mood changes.

Jess Supperer, a methadone therapist at a treatment center in Bucks County, expanded on this, saying “it’s definitely a lot harder with the tranq than with the fentanyl for them to get off of it.”

Unlike fentanyl and heroin, xylazine is not an opioid. And people who do get treatment after using it experience uncomfortable and highly dangerous detoxes that last as long as two weeks.

Despite those difficulties, Supperer said she had seen some success in people quitting xylazine.

While Savage Sisters Recovery’s team was setting up for one of their weekly outreaches, a small group of people gathered not far from one of the SEPTA stops in Kensington.

Julia Filomeno, a nurse in Philadelphia for six years, on left, and Griffin Wynne, on right, both of whom volunteer at the Savage Sisters Recovery outreach, getting wound care supplies together for folks who need to get their wounds checked out on E. Allegheny Ave. in Kensington, Philadelphia, PA on 8/2/22 (Capital-Star photo by Daniella Heminghaus).

Mel Beddis, who runs the weekly outreach, explained how crucial street outreach wound care is in places like Kensington.

“I know from being in that position … that nobody wants to sit in a hospital, wait, the stigma behind it. You go in, you have these wounds, now it’s kind of like everybody knows what it’s from so you’re kind of just looked at a certain way,” Beddis said.

Bringing wound care to the people is, she said, “somewhat of a solution.”

In an April 2 post published on the website of the National Institute on Drug Abuse, its executive Dr. Nora Volkow, wrote “little progress has been made in removing the stigma around substance use disorders.”

Also, people who use substances are continuously being blamed for the disease despite the medical community coming to “a consensus that addiction is a complex brain disorder with behavioral components” but the public, healthcare, and even justice systems continue to wrongly see it as “a result of moral weakness and flawed character,” Volkow wrote.

With a line stretching down the block for necessities at the outreach, several people waited to be seen by Julia Filomeno, a registered nurse in the city for the past six years who volunteers at Savage Sisters, to have their wounds cleaned and bandaged.

In between taking care of people, Filomeno provided some insight on how local hospitals are treating those coming in with wounds from tranq.

“[Healthcare workers] really, right now, are treating it like it would be any drug wound,”  with intravenous antibiotics, cleaning, sometimes draining the wound, and frequent bandage changes, she said. 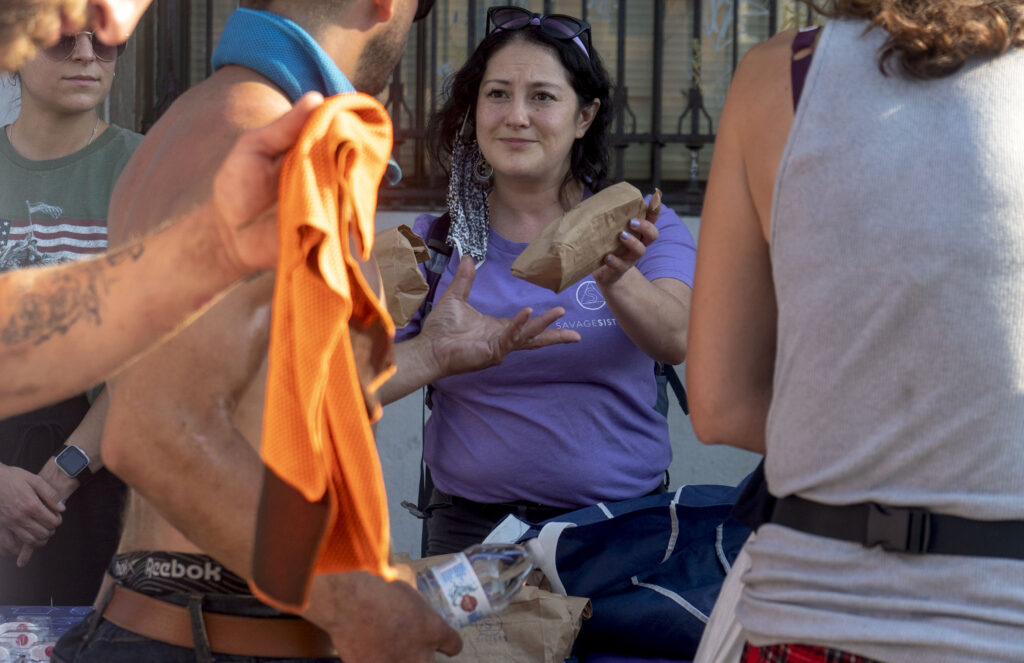 Miya Benintende hands out safe use kits to people who came up to the Savage Sisters Recovery outreach table on E. Allegheny Ave. in Kensington, Philadelphia, PA on 8/2/22 (Capital-Star photo by Daniella Heminghaus).

Andrea Spagnolo, a registered nurse for the past 35 years, formerly at Cooper Hospital in Camden, N.J.,  who also volunteers with Savage Sisters, said the wounds are very different to those seen in heroin and or fentanyl use.

“It’s coming out all over, nowhere near where they’re injecting. On their legs, on their backs, on their groin, everywhere, on their necks. It just starts cutting. If we can get them when it first starts, that’s great. We try to clean it, give them stuff and tell them ‘look you gotta go [to the hospital] or you’re gonna look like that guy over there’”

If they’re left completely untreated, the wounds can cause sepsis and may lead to limb amputations. They also can be caused if the person smokes or snorts xylazine. 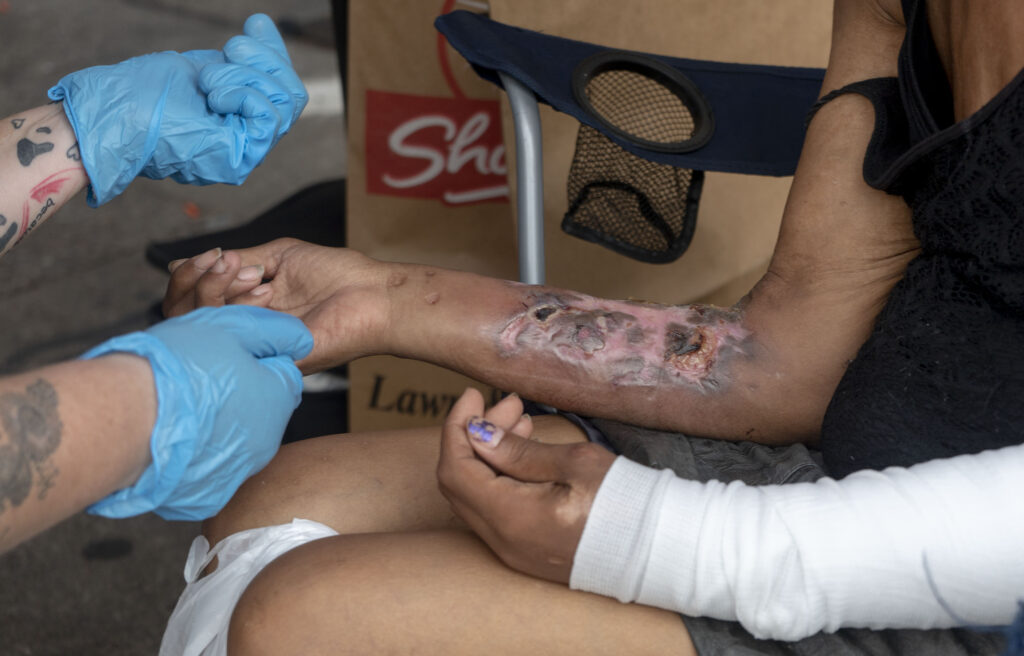 Back at the Savage Sisters outreach, another person approached Katie Mowrey, a volunteer also working at the wound care table.

This person, whom the Capital-Star is identifying as “E” because they sought anonymity to speak freely, had been struggling with substances for the past 20 years. He said he’d tried  to get into rehab but needed medical clearance because of his wounds. He had been sober for a number of years but went back to using after some family struggles.

As “E” told Mowrey about his wounds, he brought up the day he landed in the hospital and a doctor explained how tranq is not meant for human consumption  And because the human body is trying to reject it, it will try to escape any way it can, adding that “it just goes out any little pimple or cut or scab. It just pushes out that area.” 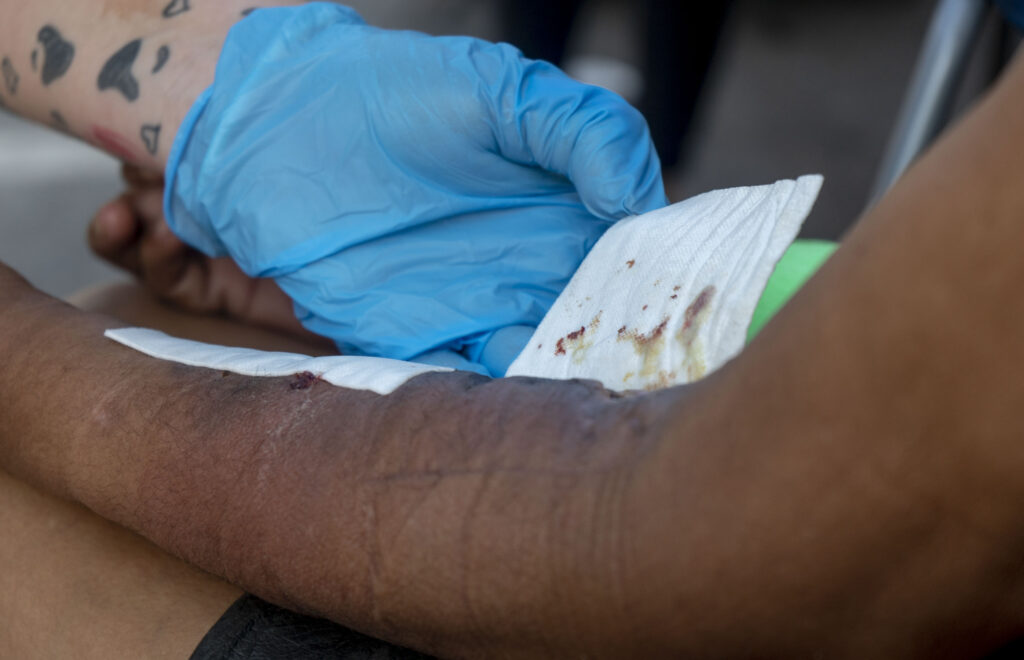 He, too, had his wounds cleaned and bandaged before getting a take home bag and heading back out to the northwestern area of the city where he lives.

According to reports by the Philadelphia Medical Examiners Office and the Department of Public Health, xylazine had only been found in 2 percent  of the 1,854 unintentional overdose deaths involving heroin and/or fentanyl from 2010-2015.

That number jumped to 31 percent  in 2019., Between 2020 and 2021, the percentage found in unintentional overdose deaths rose an additional 8 percent . But it is not just in Philadelphia. Xylazine, which was first found in the Puerto Rican drug scene in the mid-2000s, has been found in Bucks, Chester, Dauphin, Huntingdon, and Montgomery counties as well as in parts of the U.S. and Canada.

Another issue is that people are coming to Kensington from all over the area to get their substance of choice and are getting stuck there.

Savage Sisters’ Sarah Laurel said she’d explained this to members of Philadelphia City Council, telling them that ““the kids that we’re treating, my friends on the street, they’re not from Philly. This is DelCo, Bucks, MontCo, York, Allentown. This is kids from all over the state that are comfy county kids that come to Kensington and get stuck.”

Spagnolo, the nurse, said she knew a few of the people she saw in Kensington from the suburbs.

“A lot of them are people that I know’s kids,” she said. “Everytime I go down there, I have a bunch of pictures on my phone of people that are looking for their kids from Woodbury, New Jersey, Depford (N.J), [Delaware County]… everybody knows, if you want to go get drugs, you go to Kensington … I’ve seen people down there that, I have their pictures, and I’m like ‘Yo, your mom is looking for you.’ And they’re like ‘yeah, I’m not ready…’ It’s a heartbreak.”

In New Jersey, Jenny DeStefano, who works at a drug treatment center at the Jersey Shore, said she’d seen similar wounds on shore locals that come into her clinic daily.

DeStefano said the first time she and her coworkers noticed these wounds on their patients was in May of this year and since then they have seen a couple dozen more.

These patients had admitted to going to Camden and/or Patterson for their substances but came back as part of the treatment program. Her clinic has also seen a rise in patients being hospitalized for these infections.

“Considering we’re the outer, outer, outer suburbs of Philly and, if you go north, New York City, so if this is the light ripple effect that is happening and it is hitting this area, then this is where you see it start, the people who are attempting to get some form of help,” she said.

The workers there reported seeing wounds linked to xylazine since the start of 2022. All three locations have been giving out information about xylazine in addition to wound care kits to those who come through their doors, she added.

“In [New] Jersey at all three of our locations, in Jersey City, Patterson, and Trenton, we are seeing it and in an increase as well,” she said.