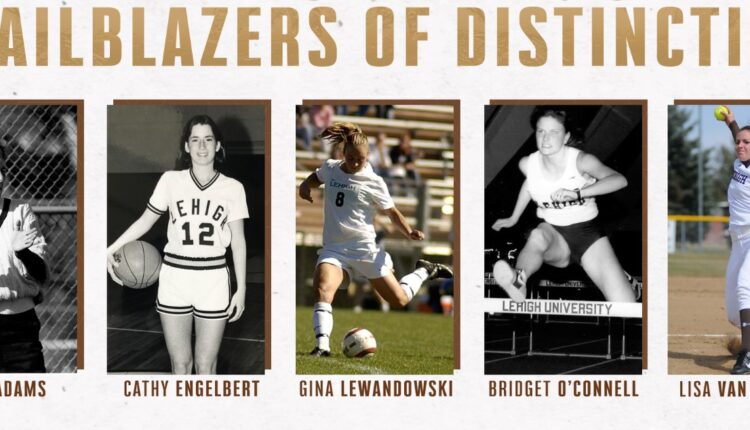 Title IX: Changes in sports equity at Lehigh over the years

To commemorate the 50th anniversary of Title IX, the Patriot League appointed select women as “Trailblazers of Distinction.” This title celebrates their accomplishments as athletes, coaches and administrators.

Title IX, a federal civil rights law passed on June 23, 1972, states: “No person in the United States shall, on the basis of sex, be excluded from participation in, be denied the benefits of, or be subjected to discrimination under any education program or activity receiving Federal financial assistance.”

Athletic programs fall under educational programs, which means female athletes are given equal opportunity in sports, from elementary to high school to collegiate athletics, under this law.

The 10 full-member institutions of the Patriot League each selected five women to receive the Trailblazers of Distinction award. The league itself also chose four women to recognize.

in a press release from Sept. 14, the Patriot League announced the 54 honorees, citing the award as representing the “Patriot League’s vision for their achievement of athletic potential in addition to values ​​of integrity, character and personal development.”

Lehigh Athletic Director Joe Sterrett, ’76, said the Patriot League raised the idea of ​​the award to each member school in the late spring of this year. Sterrett said Lehigh’s athletic leadership council, composed of 10 individuals who gather on a weekly basis, got together and compiled a list of about 16 potential honorees. That number was later narrowed down to five.

“These five women were people that had a substantial impact, both in their undergraduate competitive days and in their careers,” Sterrett said. “They serve as exemplars and role models for generations of women that would come after them.”

Sterrett, who has worked at Lehigh for 46 years, was in his first year at Lehigh in 1972, the year Title IX was adopted as an amendment to the Civil Rights Act.

During that time, Sterrett, who after graduating began coaching for Lehigh’s football team, said there were very few competitive opportunities for women, and they didn’t get nearly the level of attention and support that male athletes got.

“I had exposure to the other coaches who were involved with our women’s sports program and I watched what they went through and how challenging a lot of it was in the early years and recognized that they weren’t particularly supported,” Sterrett said.

When he stepped into the role he currently holds, Sterrett said one of his main goals was bringing the quality of experience for women athletes and programs to the same level as it was for the male programs. Today, Sterrett said Lehigh Athletics is even more committed to ensuring equity in their approach.

O’Connell said she felt supported during her time as a student-athlete at Lehigh in the 1990s. She said there were female coaches, trainers and administrators on campus at the time.

Bridget O’Connell, ’95, ran the 400-meter hurdles for the Lehigh women’s track and field team. O’Connell was recognized as one of the “Trailblazers of Distinction.” (Courtesy of Bridget O’Connell)

Because of that, O’Connell said she was able to see herself reflected in other parts of the university at the time.

A Lehigh Valley native, O’Connell said she originally planned to run collegiately in the Midwest, but various meetings with the head track coach at Lehigh led her to the school. O’Connell ran the 400-meter hurdles in competition, coming in second place in the Patriot League her senior year, and also rowed crew.

After completing her undergraduate education, majoring in English and anthropology, O’Connell said she made the decision to get her master’s degree and Ph.D. in educational leadership at Lehigh.

O’Connell currently serves as the superintendent of the Palisades School District in Bucks County and was awarded the 2022 Pennsylvania Superintendent of the Year Aware. She said many of the lessons of perseverance and teamwork while on an athletic team translated into her role as an educator.

“If there’s a challenge, which could be the starting gun when you’re taking off for your race, whatever the competition is, that drive is still with me,” O’Connell said. “If there’s something that needs to be accomplished, I’m ready and willing and game to go for it.”

Van Ackeren is still the only four-time Patriot League Pitcher of the Year in league history. She holds the most Patriot League pitching records with 94 wins, 31 shutouts, 928 strikeouts and four no-hitters.

Lisa Van Ackeren, ’09, poses with Director of Athletics Joe Sterett. She was recently named as a “Trailblazer of Distinction.” During his time at Lehigh, Van Ackeren won four consecutive Patriot League Pitcher of the Year awards. (Courtesy of Lehigh Sports)

During her freshman year in 2005, the softball team won the Patriot League Championship and knocked off No. 13 Texas A&M in the NCAA tournament. Van Ackeren said this was her most memorable moment on the team.

While reflecting on her time as a student athlete at Lehigh, Van Ackeren said the opportunities given to athletes were just beginning to grow.

“Right now, women’s sports and the stories around women’s sports are growing and incredible,” Van Ackeren said. “I think we were still trying to figure out how to tell those stories.”

Van Ackeren said many of the lessons she learned at Lehigh translated into her current role as head softball coach at Princeton for the past 10 seasons. She is already the third most-winning coach in program history.

She said her favorite part of the job is emulating the experience she had as an athlete at Lehigh for her current players at Princeton.

“I just had the most amazing group of people at Lehigh, people who I call family to this day,” Van Ackeren said. “I feel like going back to Lehigh, I’m going home and there’s such a strong, emotional, heartfelt connection that I have to that place.”

Lewandowski said she felt supported by her coaches and teammates during her time at Lehigh. She said her Lehigh experience was positive both as a student and an athlete. 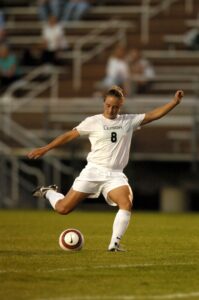 Gina Lewandowski, ’07, was a member of the Lehigh women’s soccer team and was also recognized as a “Trailblazer of Distinction.” She recently returned to Lehigh after spending 15 years in the majors. (Courtesy of Lehigh Sports)

After playing at the professional level for 15 years in both Germany and the states, Lewandowksi recently returned to Lehigh as an assistant coach for the women’s soccer program and to work with the Lehigh Athletics sports performance team.

“At Lehigh I learned a lot of great, valuable lessons with my mentality, my preparation, my routine, and how to prepare myself to be the best I can be on the field,” Lewandowski said. “I took all that with me to the next level.”

O’Connell, Lewandowski and Van Ackeren each said they were surprised to find out they were honored as Trailblazers of Distinction but were grateful for the recognition.

Van Ackeren said the award inspired her to continue to try and make an impact and fight for women’s sports.

“It made me feel a greater sense of responsibility to carry the torch forward,” Van Ackeren said. “I’m not sure I recognized in the moment as an athlete that I could be impacting women’s sports in a positive way.”

To celebrate the honorees, Sterrrett said he hopes to find a time where each woman can attend a home game in their sport and be celebrated that way.

In reflecting on their past athletic experiences, all three women said they recognize the impact Title IX had on their careers.

When O’Connell was an athlete at Lehigh, she said there were no women pole vaulters or steeplechasers on the track team, and now those events are included in all collegiate track meets. She said she is also proud that Lehigh has a club wrestling team, and she would like to see where even more of these opportunities for women lead.

Van Ackeren said she recognizes the changes in media coverage, as most of the Division I softball games including the NCAA Women’s College World Series are now regularly streamed on ESPN, but she thinks this is an area that can continue to expand.

Lewandowski said women athletes have been given more resources, which has stemmed from the youth level to the professionals, and she sees that in the United States women’s national soccer team fighting for equal pay. She said she hopes to see more women coaches at all levels.

“I think the more we can just put women into leadership positions and support them, the more normalized it becomes,” Lewandowski said.

Looking towards the future, Sterrett said he hopes the Lehigh community will continue to recognize its female student athletes by investing in resources, time and energy to make those athletes feel supported.

“All these women that we chose rose to the very top of their chosen profession,” Sterrett said. “They deserve to be appreciated for the role that their sports involvement had in that process.”