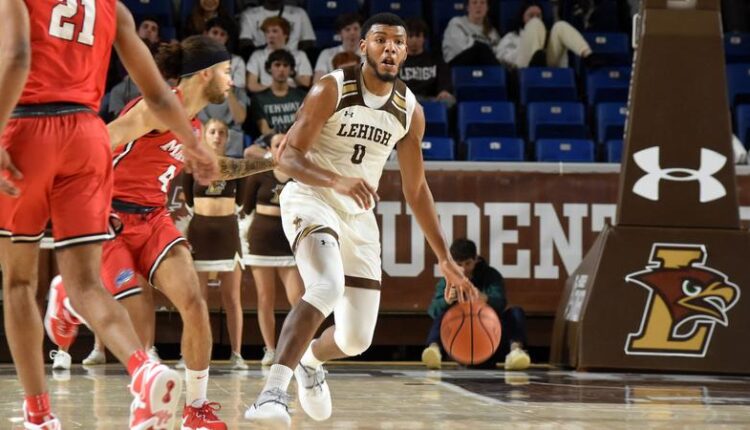 BETHLEHEM, Pa. – The Lehigh men’s basketball squad held Marist to just 18 percent from the field in the first half and a 13-point advantage at the break en route to a 64-54 victory inside Stabler Arena on Wednesday evening.

Lehigh evens his record at 2-2 on the year and handed Marist his second loss as the Red Foxes are now 1-2.

Marist’s largest lead of the game came at 13:43 in the first half when the Red Foxes were up 5-2. The Mountain Hawks went on a 15-0 run that gave them the lead and they did not surrender it for the remainder of the contest. Lehigh was ahead by as many 17 on two different occasions in the first half and went into intermission possessing a 29-16 lead.

A slow start to the second half had Marist within six points, 31-25, before the Mountain Hawks put together another run, scoring 14-straight to extend their advantage to 20 points at 45-25, with 10:52 remaining. Lehigh pushed his lead to 22 points, 54-32, when the Red Foxes started pushing back and scored the next 11 points to cut the deficit in half, 54-43. Marist was behind by single digits with under a minute to play, but the Mountain Hawks were able to close out the game and come away with a 64-54 victory.

Lehigh had three student-athletes finish in double-figures in points, led by sophomore Keith Higgins Jr., who was the leading scorer in back-to-back games for the Mountain Hawks. He recorded 15 points after shooting 4-for-10 from the field, 3-for-8 from long-distance and 4-for-5 from the free throw line. Higgins added five rebounds and three assists while senior Jakob Alamudun finished the evening with 13 points, seven boards and two assists.

The other Mountain Hawk to score in double figures was senior Evan Taylor, his third game reaching 10-plus points. Taylor tossed in 11 points with nine of them coming in the second half. Five of Taylor’s points came at the foul line, where he went 5-for-8, and brought down a team-high of nine rebounds to go with a block and one assist. Finishing the night just one point shy of double-figures was junior Jalin Sinclair. He contributed nine points, going 3-for-5 from the floor and 2-for-3 from long distance and converted on an and-one play for his lone free throw shot of the contest.

Lehigh out-rebounded Marist 46-41 with big contributions from sophomore Tyler Whitney-Sidney and first-year Henri Adiassa who both recorded seven boards. On the defensive side of the ball, senior Reed Fenton forced multiple miscues from the Red Foxes, swiping a team-high three steals and also recording a blocked shot for the Mountain Hawks.

Highlights from our 2nd-straight win and first in Stabler! #GoLehigh pic.twitter.com/wnQf9zLL0b

Staying with the Lehigh defense, the Mountain Hawks held Marist to a shooting percentage of 18.5 in the first half and kept the Red Foxes under 30 percent on the night. Lehigh also forced 18 turnovers. The Brown and White almost doubled-up Marist in fast break points, leading that statistical category 32-17, and scored 24 points in the paint to the Red Foxes’ 16.

Lehigh returns to action on Monday, Nov. 21 when the Mountain Hawks travel to Loretto, Pa. to take on Saint Francis (Pa.) at 7 pm The game will be broadcast on NEC Front Row and Fox Sports Radio at 94.7 FM and 1230 AM.