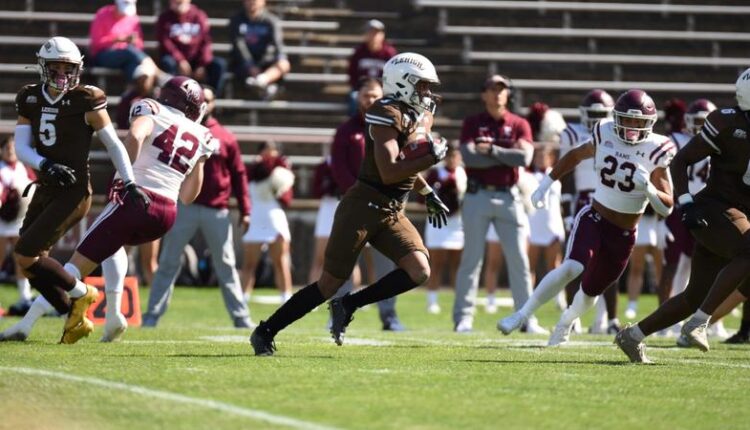 BETHLEHEM, Pa. – Lehigh led no. 16/RV Fordham 21-17 at halftime but the visiting Rams used a 17-0 third-quarter spurt to claim a 40-28 win over the Mountain Hawks Saturday on Tackle Cancer Day at Goodman Stadium, presented by Red Robin in partnership with the Leukemia and Lymphoma Society.

The Mountain Hawks’ special teams and defense helped stake Lehigh to a 14-0 lead before the offense even stepped on the field. Fordham, which boasts the nation’s top-ranked offense, responded by posting 632 yards of offense.

Rams quarterback Tim DeMorat, the top passer in the FCS, completed 26-of-37 passes for 499 yards and four touchdowns, with wide receiver Dequece Carter hauling in four for 208 yards and two scores.

The loss drops Lehigh to 1-5 overall and 1-1 in league play, while Fordham improves to 5-1 overall and 2-0 in the Patriot League.

“I thought our guys came out and they played hard,” Lehigh head coach Tom Gilmore. “We had some really exciting plays at the beginning of the game with special teams and on defense. We’re doing good things on both sides of the ball on offense and defense. We weren’t consistent enough. We gave up some big plays on defense which allowed them to get back in the game.”

Things started well for Lehigh as senior Jalen Burbage took the opening kickoff and raced 89 yards for a touchdown to give Lehigh the lead 15 seconds into the contest.

Fordham moved the ball into Lehigh territory on its first possession, but the drive ended on a strip-sack by senior Stephon Bland. Senior Dean Colton recovered the ball in Fordham territory and raced 39 yards for his second touchdown in three weeks. The extra point gave Lehigh a 14-0 lead with 11:02 to play in the first quarter.

The Rams capped a first quarterback that featured 28 combined points with two touchdowns, a 42-yard rush by Julius Loughridge and a 48-yard pass from DeMorat to MJ Wright.

A Brandon Peskin 24-yard field goal gave the Rams a 17-14 lead early in the second quarter, but Lehigh answered with a 15-play, 75-yard drive and took a 21-17 lead on a six-yard touchdown pass from junior Dante Perri to junior Eric Johnson.

Fordham scored on all three of its third quarter drives as the Rams needed just two plays to take the lead on a 13-yard pass from DeMorat to Mekai Felton. A 40-yard touchdown to Carter and a 20-yard Peskin field goal gave the Rams a 34-21 lead after three quarters.

Lehigh responded with a 17-play, 80-yard drive that spanned the third and fourth quarters. Perri hit junior Connor Kennedy for a four-yard touchdown to bring Lehigh back within six at 34-28.

“I thought we moved the ball a lot better on offense today than we did last week,” Gilmore said. “We had 24 first downs today which is a far cry from where we were last week so we made a huge improvement and we actually converted a couple of fourth downs and we got in the end zone.”

The Mountain Hawks stopped the Rams on downs at the Lehigh 30 on Fordham’s ensuing drive and got the ball back down six with 11:34 to play, but were unable to capitalize.

Fordham put the game away with a 79-yard touchdown from DeMorat to Carter with 9:56 remaining.

We were in the football game and had the chance to win it in the fourth quarter but we weren’t able to close the loop and obviously we have the result that we’re not happy with,” Gilmore said. “I thought the kids played with a lot of heart and a lot of energy. We did a lot of good things against a really good football team and I think there’s a lot more to work on that we can build on moving forward.”

Perri finished 19-of-46 for 185 yards and two touchdowns. First-year Geoffrey Jamiel had five receptions for 57 yards, while Johnson and Burbage both caught four.

The Mountain Hawks will step out of league play next Saturday when they travel to Cornell for a 1 pm kickoff. The game will be broadcast on ESPN+ with audio coverage on Fox Sports Radio 94.7 FM and 1230 AM beginning at noon.

EXTRA POINTS… Lehigh had 24 first downs, compared to 25 for Fordham… The Rams gained 133 yards on the ground… Burbage’s kickoff return touchdown was the first for a Lehigh player since Gatlin Casey had a 93-yard touchdown return against Princeton in 2016… Colton’s fumble return touchdown was the first for a Mountain Hawk since Sam McCloskey returned one 56 yards versus Saint Francis (Pa.) in 2019…. Kennedy’s touchdown reception was the first of his career… Lehigh held Fotis Kokosioulis, the top receiver in the FCS coming into the day to three catches for 40 yards… The Mountain Hawks were plus-2 in turnover margin marking the first time this season that Lehigh won the turnover battle.