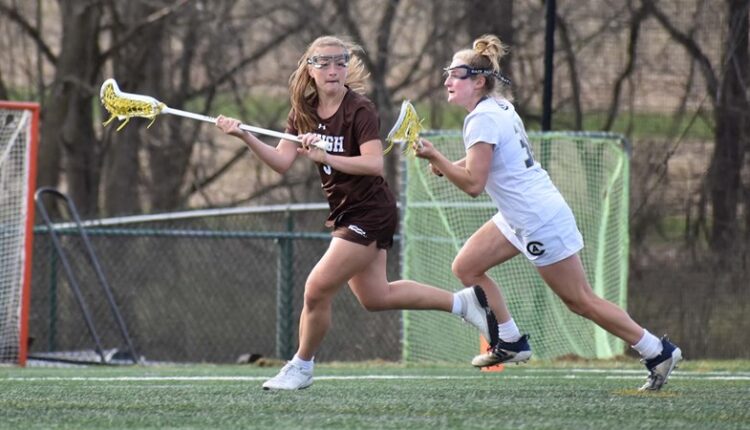 BETHLEHEM, Pa. – UC Davis used a five-goal third-quarter surge to turn a 6-5 deficit into a 10-6 lead, which proved too much for the Mountain Hawks to overcome, as the Aggies downed the Lehigh women’s lacrosse team, 13-11 on Tuesday at the Ulrich Sports Complex. Junior Katia Carnevale led the offense with five goals and two assists for her 12th career hat trick, while classmate Gabby Schneider scored three goals for her fourth hat trick of the season (and 10th of her career).

Junior Cassie Marte impressed in the midfield with career highs in groundballs (5) and caused turnovers (5), along with three draw controls.

The Mountain Hawks opened with three of the game’s first four goals, scored by juniors Emma Eberhardt, Carnevale and Schneider. UC Davis responded with six seconds left in the first quarter and turned that into a 3-0 run with two goals in the first 1:17 of the second to take a 4-3 lead.

— Lehigh W Lacrosse (@LehighWLacrosse) March 22, 2022 A game of runs saw Lehigh answer with three of the next four bridging the first and second halves, as a Carnevale goal at 13:36 of the third quarter broke a 5-5 halftime tie.

However, the Aggies answered in a major way, scoring five unanswered to end the quarter, a run that extended to 6-0 early in the fourth.

The Mountain Hawks clawed back with two straight, three of the next four and four of the game’s final six goals. Included was first year Angelina Pino’s first-career goal with exactly two minutes remaining to pull Lehigh within 13-11, but UC Davis won the ensuing draw and was able to run out almost 90 seconds to all but clinch the victory.

What a sequence, from the Cassie Marte caused turnover and GB to the Lily Salcedo feed and Katia Carnevale laser of a goal to get Lehigh within three.

— Lehigh W Lacrosse (@LehighWLacrosse) March 23, 2022 Final shots were 29-28 in favor of Lehigh while the Mountain Hawks held an 18-16 edge in groundballs and 17-11 edge in draw controls. Junior goalkeeper Hayley Hunt made nine saves across UC Davis’ Ashley Laing, who had 10.

Highlights from a tough battle against UC Davis today. The Mountain Hawks are on the road for their next one against Navy on Saturday. #LGH pic.twitter.com/9XnVL5Fu29

— Lehigh W Lacrosse (@LehighWLacrosse) March 22, 2022 Lehigh will hit the road for its next two games, both of which will be against Patriot League foes. The Mountain Hawks will travel to Navy on Saturday for a rematch of last season’s Patriot League Quarterfinal, won by Lehigh in overtime. Opening draw is set for 3 pm Lehigh will then travel to Army West Point on March 30.

As a Nurse Faces Prison for a Deadly Error, Her Colleagues Worry: Could I Be Next?