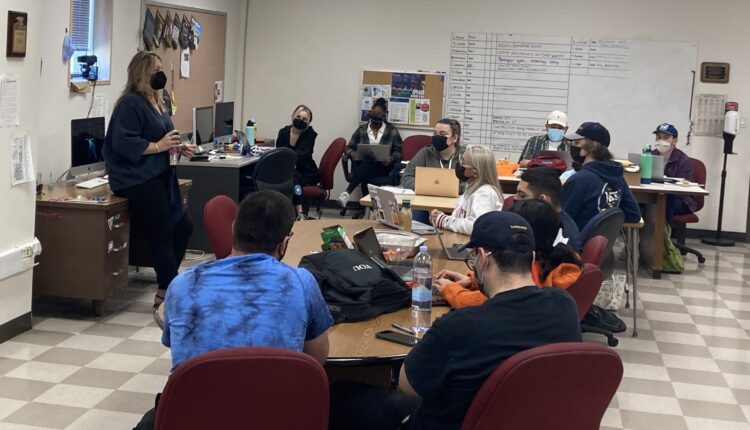 Alma Matters is a Poynter newsletter designed to provide ideas, news and insight to those in the journalism education community. Subscribe here to get Alma Matters delivered to you.

Have you ever asked your students, “What could journalism professors do better? What do you think you’ve really learned so far?”

I certainly never did, but that’s exactly what I asked newspaper students at Cal State Northridge last week when I went for a campus visit. Professor Arvli Ward routinely brings in speakers and has his class of journalism students interview them. (Fun fact — the speaker before me was Susan Orlean, so that wasn’t intimidating at all.)

After the class asked me a series of excellent questions, I turned the tables on them briefly and asked their thoughts about a couple of topics — what they’d truly registered so far in journalism school and what they wish their professors were better at.

Bryan Hernandez is a transfer student from a community college, where the emphasis in journalism tended toward print. He said he had to learn digital skills fast.

“I had to adapt to all that as someone who’s just brand new to it,” he said, adding that gaining a better understanding of the news cycle and what makes newsworthy stories have proven to be valuable skills.

“​​I think that when I first started off here at CSUN, I thought journalism was based on just learning how to write, and that was it,” said Ashley Orellana. She said through her classes she now better understands the impact of language on groups and communities. She also said that learning not just about the spread of misinformation but how to check against it and make sure it doesn’t creep into your reporting has been a valuable part of her education.

The question that really made them perk up, however, was this one: What do you think is important for modern journalism educators to understand?

David Olvea said that as a transfer student, he didn’t realize how chaotic and hectic daily journalism can be. He also said that he’s only just now beginning to understand that all stories won’t be assignments.

“It’s going to be up to you to go look for stuff,” he said. “You don’t realize that the passions and the things you actually care about can be the center of your stories.”

Rylee Holwager agreed, noting, “It’s kind of just finding the balance between what you want to do and what you are supposed to, quote-unquote, be doing.”

Isaac Medina said he thinks it’s important that professors consider the challenges of being a current journalism student — some work, some commute, some struggle with mental health, some are busy with extracurriculars and some have little support or are first-generation college students who might be misunderstood at home.

“I think just be more understanding of student situations,” he said.

The whole exercise made me think about long-term classroom assignments and opening doors to let students have a say in their education. I’m not saying that you don’t know best, but it was an interesting and challenging exercise — one that I’m proud of these CSUN students stepped up to.

As Russia’s invasion of Ukraine continues, I’ve been contemplating journalism-adjacent classroom exercises. Here are some ideas to keep you motivated.

First, my god, the misinformation. This NBC News story “Russian disinformation, propaganda ramp up as conflict in Ukraine grows” is good, as is “How to spot video and photo fakes as Russia invades Ukraine” from our own Al Tompkins.

If you’re digging the misinformation lessons, you can also always sign up here to have one of MediaWise’s Campus Correspondents visit your classroom for an engaging session on sussing out misinformation, or you can show or assign them our less-than-20-minute master class video on the same topics.

If you’re looking for good coverage to showcase, Poynter’s Tom Jones has been keeping track of all the excellent, difficult work being done by journalists across the nation in his daily Poynter Report. Examples: “The latest notable journalism from Russia’s invasion of Ukraine,” “Heart-wrenching stories show the importance of media coverage in Ukraine” and “CNN leads media coverage of Russia’s invasion of Ukraine.”

And last, I think it’s an opportune time to examine Ukrainian and Russian news media. Two issues come to mind.

First, you can show in real time the stark differences between news outlets in a democracy vs. an autocracy. It’s a great time to highlight the power and prevalence of Russia’s state media, a concept that may very well be foreign to students just now truly studying this country’s journalistic freedoms (here’s a good summary from Reuters: “US says Russia blocks independent news outlets, social media.”) Second, this feels like an opportunity to demonstrate just how deep journalistic ethics run. Would your students flee their country if they weren’t allowed to pursue and disseminate the truth? (Show CNN’s “Journalists from Russia’s last independent news network are fleeing the country” and, to demonstrate that people do want the truth, “Millions of Russians turn to BBC for news amid invasion of Ukraine” from The Hill.) Would students insert themselves into a war zone to bring people facts? How far would they be willing to go to cover their country’s invasion or its aggressive military action?

While I was at CSUN this week, Linda Bowen, chair of the journalism department, alerted me to this great story from student Trevor Morgan. I love that the students there (and presumably elsewhere!) were jumping at the opportunity to hear from Ukrainian students. But I can’t help but wonder … what’s going on with your Russian students? Some people want them deported, and I’m curious if they are facing hate on campus. If you’ve seen a story about either Russian or Ukrainian students, will you send it my way?

I’m not sure who needs to see this, but Taylor Lorenz’s recent Twitter thread is a must-read for anyone who’s suggesting that, you know, students promote their work online. She writes about the harassment she has faced while reporting on internet culture, and claims that her employer (The New York Times, have you ever heard of them?) offered “zero support.” It’s a really eye-opening and specific look at targeted harassment with screengrabs and people in her feed adding additional insight.

I don’t think there’s a great solution, but it’s incumbent upon those of us who teach young journalists — especially young women and journalists of color — to understand this phenomenon and be prepared to offer support should one of our own face anything like this.

Professor Jeremy Littau at Lehigh University posted this Twitter thread last week about language choice and objectivity in the news. It might be interesting to examine it in your classroom, along with this Poynter piece, which I also highlighted in the DEI section of this newsletter, and this statement from the Arab and Middle Eastern Journalists Association.

(If you’d like to be featured in this section, please email me at [email protected] Be prepared to send a blurb, a photo and pertinent links.)

This week, we featured a guest column from the editor of West Virginia’s Daily Athenaeum: “How one student newsroom embraced digital-first publishing and doubled its audience.”

Subscribe to The Lead, Poynter’s weekly newsletter for student journalists, and encourage your students to do the same.

In this week’s Professor’s Press Pass, we learn about Americans who are taken hostage in foreign countries, especially journalists, via Lesley Stahl’s recent “60 Minutes” interview with freed hostage Danny Fenster. Students are asked to consider the lengths they would go to practice good journalism. As I am increasingly fond of saying, it’s a doozy!

Is this what you think of when you hear Title IX? Me either, unfortunately.

Mountain Hawks Move Four Into EIWA Semifinals; Sit In Fourth After Day One

Lehigh uses five-run first to get past Delaware State in Sunday finale, 7-3