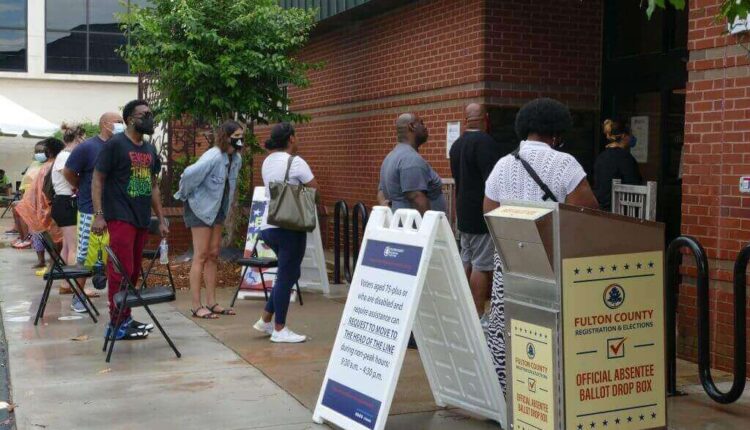 Be afraid. Be very afraid. And then vote.

The Nov. 8, 2022 general election will determine whether America will remain a multicultural secular democracy or become a racist religious autocracy. That is no hyperbole.

America is at a political crossroads unlike any time in its history since passage of the 13th (slavery abolition), 14th (Black citizenship), and 15th (Black male voting) Reconstruction amendments of 1865, 1868 and 1870 respectively. That is no exaggeration.

Unlike any time since then, Republicans have openly and enthusiastically embraced neo-Nazis by describing them as “very fine people,” encouraged the Proud Boys, a far right hate group, by commanding them to “stand by,” and legitimized the KKK by accepting its endorsement through David Duke, its former Grand Wizard.

And as of April 8, as documented by the States United Democracy Center (SUDC), racist Republican officials “in 33 states are now considering 229 bills that would allow state legislatures to … criminalize … or interfere with elections … [and] a total of 50 bills have been enacted or adopted, 32 last year and 18 thus far this year.”

Prior to that, as of Dec. 15, 2021, SUDC disclosed that “There have been at least 262 bills introduced [by Republicans] in 41 states that would interfere with election administration – and 32 of these bills have become law across 17 states.”

Like I said, be afraid. Be very afraid. And then vote.

How one Philadelphia reproductive rights group is making its voice heard

Those laws generally ban discussion, training and orientation supporting the idea that “the U.S. is inherently racist” and go onto ban any talk of “conscious and unconscious bias, privilege, discrimination, and oppression,” according to Brookings. Almost “20 additional states have introduced or plan to introduce similar legislation.”

If you’re Black and if you want to keep your right to vote (as well as to learn the truth about America’s racist history) and if you want to stop America from becoming a racist religious autocracy, you better exercise that right.

Therefore, you must vote and you must encourage Black freedom-loving family members, relatives, friends, associates, neighbors and co-workers to vote. And if they ask you why, tell them there are millions of reasons, including these ten:

1. We must politically avenge our ancestors who were enslaved beginning Aug. 25, 1619 here on the land that became the United States of America. Black voting could’ve changed that.

2. The government of the United States of America was founded on racism as proven by the fact that 41 of the 56 signers of the Declaration of Independence in 1776 enslaved Black people. Black voting could’ve changed that.

3. The system created by the government of the United States of America was established on racism as proven by the fact that its fundamental document – the Constitution – in 1789 established the racist Electoral College, defined enslaved Blacks as subhuman by counting them as a mere three-fifths of a human being, continued the importation of Africans into slavery for at least two more decades, and tightened the grip of slavery by requiring free states to return escapees to “slave” states. Black voting could’ve changed that.

4. The government of the United States of America was led by racists as proven by the fact that 13 of the first 18 presidents enslaved Black people. Black voting could’ve changed that.

5. The Supreme Court, in the notorious 1857 Dred Scott case, ruled that Blacks “had no rights which the white man was bound to respect.” By the way, that ruling has never, I repeat never, been overturned by the U.S. Supreme Court. In fact, Kansas Solicitor General Stephen McCallister in 2016 filed a legal brief in that state’s Supreme Court citing the Dred Scott decision to support his bigoted (and sexist) legal argument in a case, entitled Herbert Hodes, M.D. and Traci Lynn Nauser, M.D. v. Kansas Attorney General Derek Schmidt. He did that because, although he’s a racist, he’s a smart lawyer who knows that the U.S. Supreme Court has never overturned the Dred Scott decision. Unencumbered and widespread Black voting would’ve changed those cases by changing the people appointed to the Supreme Court.

6. The Supreme Court in the 2013 Shelby County v. Attorney General Eric Holder case damn near killed the Voting Rights Act (VRA) of 1965 by invalidating two essential “pre-clearance” sections of the VRA, thereby making it much easier for racist southern states to disenfranchise Blacks. Unencumbered and widespread Black voting would’ve changed that by changing the people appointed to the Supreme Court.

8. Racist Republicans in Congress still refuse to pass the George Floyd Justice in Policing Act of 2021 and the John Lewis Voting Rights Advancement Act of 2021. Black voting should’ve changed that.

9. In 2016 column for The Tribune, I  pointied out that Time Magazine had cited a YouGov/Economist exit poll in which the Republican supporters of fake former President Donald Trump were asked if they approved or disapproved of emancipation for Blacks. Nearly half – a whopping 47 percent – disapproved, had some reservations or weren’t sure.

10. Read number 9 again and think about it for a minute. Then be afraid. Be very afraid. And then vote.

This column was first published by The Philadelphia Tribune, a publishing partner of the .

Analysis: One week out, control of the U.S. Senate is still a toss-up | Tuesday Morning Coffee

In this election, it’s not about the economy or abortion. It’s both | Opinion