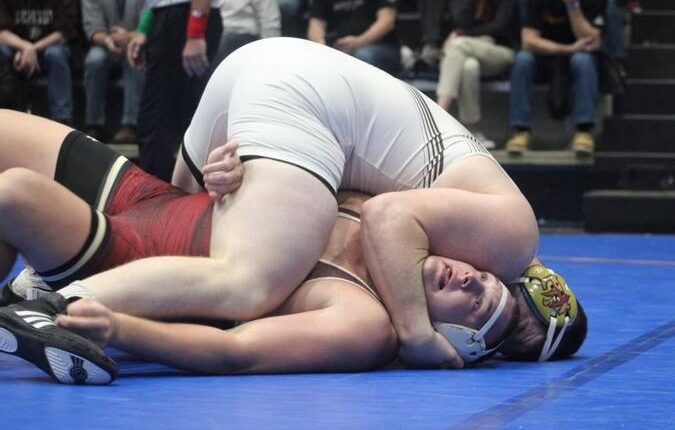 Graduate student Tate Samuelson (184) and sophomore Michael Beard (197) won by major decision and technical fall, respectively, to put Lehigh up 18-17 heading into the final bout. The win over the Sooners provided a bounce back for the Mountain Hawks, who fell to No. 11 Oklahoma State 25-6 earlier Saturday inside Leeman-Turner Arena at Grace Hall.

Saturday’s split leaves Lehigh at 3-1 in duals after two weekends of competition.

Things started well against the Sooners as Lehigh took a 6-0 lead after two bouts. After pushing seventh-ranked Trevor Mastrogiovanni of Oklahoma State to overtime earlier in the day, first-year Carter Bailey came through with a ranked win, knocking off Joey Prata 5-4 at 125. Bailey scored a first period reversal and was tough on top , earning a stalling point and riding time to go along with a third period escape.

Sophomore Connor McGonagle followed with a 4-0 win over Wyatt Henson at 133 to put Lehigh up 6-0.

Oklahoma (1-1) came back with back-to-back falls to take an 11-6 lead. Sophomore Malyke Hines led Mosha Schwartz 4-2 in the second period when he was reversed to his back. The Sooners were deducted a team point following the win. Mitch Moore then followed with a first-period pin against sophomore Manzona Bryant IV to extend the Sooners’ lead.

Senior Josh Humphreys defeated Jacob Butler to bring Lehigh within 11-9, but a pair of overtime victories staked the Sooners to a 17-9 lead. At 165 Gerrit Nijenhuis scored a takedown in sudden victory to top Brian Meyer 3-1 and then at 174, Darrien Roberts was a 2-1 tiebreaker winner over Jake Logan.

Samuelson started the comeback with an 8-0 major decision over Grayden Penner and Beard put Lehigh in front with a dominant 16-1, second period technical fall over Seth Seago.

Trailing 1-0 in the second period, Taylor scored a takedown on Heindselman and took him to his back for the match-winning fall.

Earlier Saturday, Lehigh couldn’t get past Oklahoma State (1-0) as the Cowboys won two matches in sudden victory and three others by just one or two points. Lehigh’s wins came from Beard, who opened the dual with a 10-7 decision over Luke Surber, and Humphreys, who led early and then had to hold off Kaden Gfeller 7-6 at 157. The Cowboys won eight of 10 bouts with the only bonus points of the dual coming from second ranked Daton Fix against McGonagle at 133.

Taylor’s fall against Oklahoma provided a solid bounce back from a 2-1 loss to Konner Doucet earlier in the day.

The Mountain Hawks will take to the road for the first time next weekend as they travel to No. 18 Pittsburgh. The match is set for a 7 pm start on Saturday from Fitzgerald Field House, with streaming coverage on ACC Network Extra.

We can’t forget the health dangers of fracking | Opinion