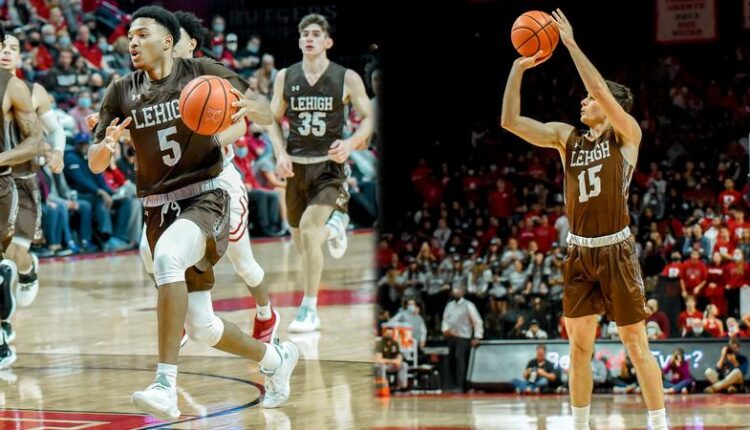 Taylor and Fenton Named Co-Captains for the 2022-23 Season

BETHLEHEM, Pa. – Lehigh head men’s basketball coach Brett Reed announced the Mountain Hawks’ 2022-23 captains on Sunday, which include seniors Evan Taylor and Reed Fenton. The two will lead the team into its season opener on Monday against Syracuse.

“I am pleased to announce that Reed and Evan have established themselves as captains for the upcoming season,” commented Reed. “Both of them exemplify what it takes to be leaders for our team and have been effective mentors and uphold the standards of our program. I have a great deal of confidence that they will fill this important roll effectively.”

Taylor was recognized as a preseason All-Patriot League team, coming off a season where he earned third team all-league honors. The Mountain Hawks’ leading returning scorer averaged 13.0 points per contest last season and tied for 13th in the Patriot League. He also averaged team-highs of 5.8 rebounds per game and 1.0 block per contest. Taylor shot 47.2 percent from the field and averaged 1.3 assists per contest. Taylor was also named to the National Association of Basketball Coaches (NABC) Honors Court and Academic All-Patriot League Team.

Fenton, a former Patriot League All-Rookie Team honoree, played in 29 of 32 contests and made seven starts a season ago. He contributed 4.0 points per game and shot 36 percent from the floor. Fenton contributed 35 assists, 17 steals, knocked down 17 three-pointers and shot 75 percent from the free throw line.

The Mountain Hawks will open the 2022-23 season on Monday when they travel to Syracuse for an 8 pm tipoff. The game will be broadcast on ACC Network Extra and Fox Sports Radio 94.7 FM and 1230 AM.

‘It’s going to come down to every single vote,’ Fetterman says at Harrisburg campaign stop