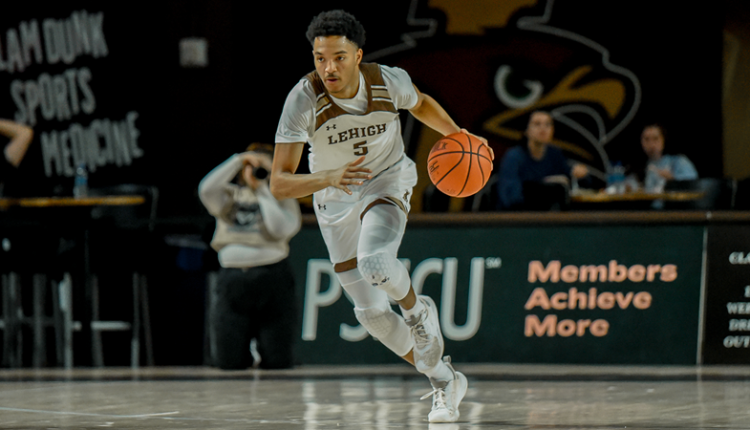 To be eligible for the Scholar-Athlete of the Year award and the Academic All-Patriot League Team, a student-athlete must have at least a 3.20 cumulative grade point average (GPA) and be a starter or key player in their sport. Freshmen or students in their first academic year at their school are not eligible for the honor. Taylor is Lehigh’s first Academic All-League honoree since Jordan Cohen was named to the team for a third straight season in 2019-20.

In the classroom, Taylor has been named to the Dean’s List in his career (for a semester GPA of 3.6 or higher). He has also earned a spot on the Patriot League Academic Honor Roll and garnered the Faculty Athletics Council Award every semester (each for semester GPAs of 3.2 or higher).

Taylor is averaging 13.1 points per game this season, 13.6 in league play, and is the only player in the Patriot League in the top 11 in the league in scoring, rebounding (5.4) and blocks (1.1). In league games, Taylor is fifth in 3-point percentage (45.2 percent, 33-of-73). He has six games with 20+ points in the Patriot League (after none in his career entering league play). Taylor began with a then-career high 25 points at American, then went on to post 21 vs Bucknell, 20 against Loyola, 21 vs Navy, 26 against Boston University and 23 at Lafayette. Perhaps his biggest highlight, he had the steal and layup in the final seconds of Lehigh’s improbable 17-point comeback in the final five minutes against Navy. Most recently, Taylor finished 10-of-11 from the floor at Lafayette, marking the highest shooting percentage for a Lehigh player with at least 10 makes in Brett Reed’s 15 seasons as Mountain Hawks’ head coach.

Taylor and the Mountain Hawks will host Army West Point Thursday night in a Patriot League Quarterfinal at Stabler Arena with game time set for 7 pm Tickets are on sale now at LehighTickets.com and can also be purchased at 610-7LU-GAME during business hours .

The Sackler Family and the Opioid Crisis