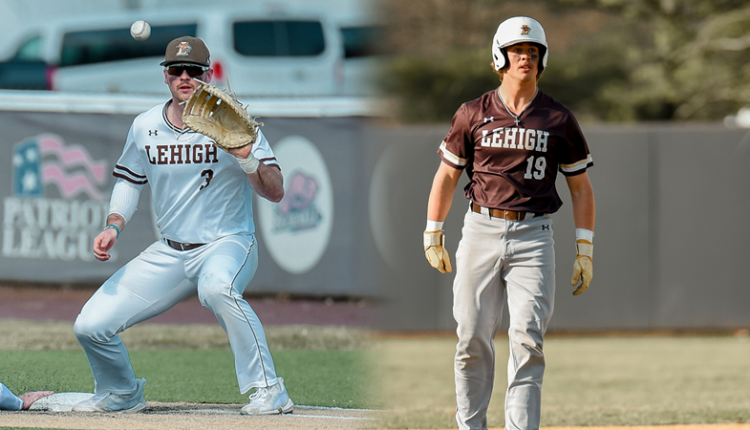 BETHLEHEM, Pa. – The Lehigh baseball team racked up two awards when the weekly slate was announced by the Patriot League office on Tuesday afternoon as senior Gerard Sweeney was named Player of the Week and first-year Justin Butler earned Rookie of the Week honors. It’s the second time this season that a pair of Mountain Hawks were given weekly awards as Sweeney was named Player of the Week for the third time in career while Butler earned his first Patriot League weekly honor.

The duo was honored as Lehigh gets set to head to Penn for mid-week action Wednesday afternoon, taking on a Quaker team that like the Mountain Hawks, have won six straight games. The contest set to take place at Meiklejohn Stadium in Philadelphia will be streamed live on ESPN+ (subscription required) with first pitch set for 3 pm

Sweeney was instrumental in Lehigh’s 6-0 week with victories over Fairleigh Dickinson, Saint Peter’s and St. Bonaventure, making his season debut after missing the first month of the season due to injury. He hit .346 (9-for-26) with three home runs, five runs scored, a .692 slugging percentage and 15 RBIs in the six-game stretch. Playing first base in all six starts, Sweeney made 52 putouts in 52 chances. He started his season on a six-game hitting streak, upping it to seven straight after getting a knock in Game 3 of last year’s Patriot League Championship Series vs. Army West Point.

Butler put together one of the best stretches by a first-year in program history, honored rightly by Collegiate Baseball Newspaper as National Player of the Week on Monday afternoon and was also named Rookie of the Week by the Patriot League. Butler belted four home runs with eight runs scored and nine RBIs. He hit .391 (9-for-23) with two walks and slugged 1.043, reaching base at a .423 clip. His four home runs give Butler a Patriot League-leading seven for the campaign, slashing .367/.898/.418 with 18 RBIs in 13 games.

In addition, senior left-hander Luke Rettig was named an honorable mention after throwing seven strong innings against St. Bonaventure Friday, giving up one run (none earned) on five hits with seven strikeouts and a walk. In five games, Rettig is 4-1 with a league-best 0.32 ERA, allowing just one earned run over 28.0 innings of work.

The Mountain Hawks have won six straight contests, completing a four-game sweep of St. Bonaventure over the weekend and have now claimed eight of their last nine games. Lehigh out-scored opponents, 68-25 during the stretch with 12 home runs and a team slashline of .354/.646/.444 with 28 walks and nine hit by pitches.

In the field, Lehigh boasts a .979 fielding percentage which ranks second in the Patriot League behind Navy (.980). The Mountain Hawks have committed just 13 errors on 632 chances this season with four every day members of the starting lineup posting perfect marks with Rother, Sweeney, Whitlinger and Butler.

Penn is 11-5 through its first 16 games of the 2022 season, currently on a season-best six-game win streak with a perfect 4-0 record at home. The Quakers opened the season with a major upset, knocking off Texas A&M on the road in two of the three games in the series.

During the 6-0 stretch, Penn swept Winthrop on the road and earned a single-game victory over Monmouth and a three-game clean sweep of Wagner in Philly.

Wyatt Henseler leads the Quakers offensively with an impressive batting average of .464 with 26 hits, six home runs, 21 RBIs, 17 runs scored and a 1,406 OPS, which includes a slugging percentage of .857 and an on-base clip of .549 . His batting average is good for sixth-best in the nation this season so far. Jackson Appel is hitting .362 with an OPS of .836 while Andrew Hernandez has hit .371 in 10 games with 13 hits.

First-year catcher Asa Wilson was named Ivy League Rookie of the Week after going 5-for-12 with two extra-base hits and two RBIs in a 4-0 week.