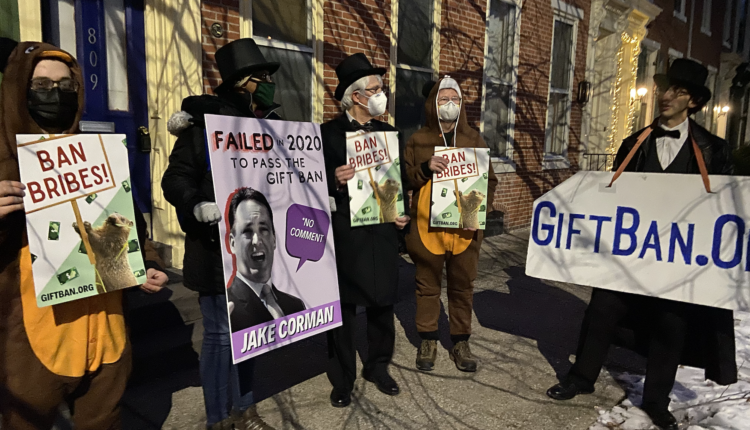 Survey: Most 2022 governor candidates back gift ban for Pa. pols

Advocates for a law banning Pennsylvania public officials from accepting gifts recently surveyed Pennsylvania gubernatorial candidates on the policy – and the results display support across party lines for such legislation.

The survey, conducted by the government reform group March on Harrisburg, found that a majority of candidates running for governor support the idea of banning gifts to public officials in some form, regardless of party affiliation.

The survey polled 16 gubernatorial candidates, with 10 of them saying they would support legislation that bans gifts in some form. Six other candidates – all Republicans – didn’t respond to March on Harrisburg, according to the organization.

One of the six who failed to respond, state Senate President Pro Tempore Jake Corman, R-Centre, said last year that he would sign gift ban legislation if it is supported by state lawmakers.

Michael Pollack of March on Harrisburg told City & State that the survey results were promising and reflected a shared belief among gubernatorial hopefuls that influence from special interests should be curbed.

“We were very pleased with a lot of the responses – most candidates talked not just about the gift ban, but about other reforms that they see that are necessary,” Pollack said. “Most candidates were able to name exactly why the gift ban is necessary, which is really not that difficult of a concept, you know? Bribery is bad.”

State and local public officials are currently able to accept an unlimited number of gifts, as long as they are not given or received with the expectation that the gift will influence an official government action. Additionally, officials must report gifts worth more than $250 on annual state-mandated paperwork. Officials are also able to accept travel, lodging and transportation – but any payments or reimbursements for those purposes must be reported if they exceed $650 in value.

Mastriano told March on Harrisburg that gifts “can be used to leverage public officials to take specific legislative actions” and added that “legislation should be passed to ban gifts for elected officials in the commonwealth.” Barletta, meanwhile, pointed out that he was subjected to gift ban restrictions during his time in Congress. “I had to adhere to strict gift bans when I was in Congress – and Harrisburg should be no different,” he told the group.

Three candidates who have since dropped out of the race – Shawn Berger, John Ventre and Tega Swann – also said they would support a ban on gifts.

Pollack said candidates who did not respond were contacted multiple times for an answer, with no luck. But none of the 16 candidates that were contacted said they oppose a gift ban, which Pollack found promising.

“Politicians are smart enough to know that you shouldn’t speak up and defend the swamp,” he told City & State. “It’s a pretty stupid move to be caught defending corruption and bribery and the ability of lobbyists to take legislators to the Bahamas. It’s an indefensible position. It’s a unanimously popular position of the public to support the ban, so nobody responded to us with any defense of corruption.”