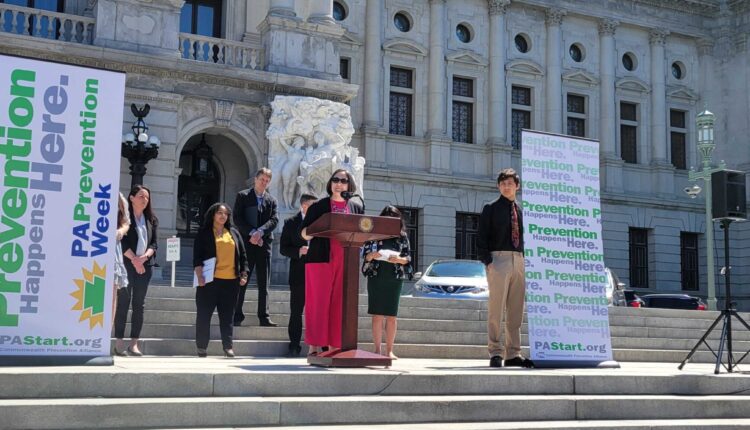 State and local addiction prevention officials gathered on the Capitol steps on Monday to highlight statewide prevention efforts as part of Pennsylvania Prevention Week, which began on Sunday and runs through Saturday.

“We often spend far too much time handling the results of a problem and little time solving the root causes of that problem,” Jeff Hanley, executive director of the Commonwealth Prevention Alliance, a grassroots prevention organization, said to the prevention leaders. “Because of your efforts prevention happens here in our communities across the Commonwealth.”

One of those leaders is Kristen Varner, administrator of Dauphin County Drug and Alcohol Services. Varner said that her own success in long-term recovery from substance use disorder is largely due to “protective factors,” such as a continuous support from a “loving environment.”

“As I learned more about prevention through my work at Dauphin County Drug and Alcohol, I learned that I had things such as protective factors that influenced me and that helped me get into recovery,” Varner said. “Protective factors such as a loving and supportive environment, which helped me find my way to recovery eventually.”

Varner said that Dauphin County is taking steps to expand programs and services to boost prevention efforts for all community members, including women, children, and the elderly.

“We are adding providers, we are adding trainings, and we are adding individuals that have a passion for this type of work,” Varner said, noting that the department is offering free training for those who want to become prevention providers in Dauphin County.

Involving and recognizing young people in small, but meaningful ways gives them the ability to adopt “healthy behaviors” and the “skills and competence to act on them,” Jeanty said.

“By promoting healthy lifestyles, having open and honest conversations, and providing a positive environment, all Pennsylvania children can thrive,” Smith said.

“Through this program,” Smith said, “teachers can connect students with resources and assist them with overcoming barriers, allowing them to remain in school and to advance academically.”

Smith emphasized the need for prevention efforts to be “guided by data.”

“The Wolf administration’s Pennsylvania Youth Survey is a survey of sixth, eighth, 10th and 12th graders that helps assess student’s perspective of their school environment, their mental health, as well as their behaviors and attitudes related to alcohol, tobacco, other drugs, violence and other problem behaviors,” Smith said.

The 2021 Youth Survey recorded responses from students at 468 school districts across Pennsylvania.

Its results, which have yet to be made public, will inform state and local entities’ future efforts Smith said.

“Tools like the Pennsylvania Youth Survey will help us recognize where holes may exist and more importantly, help guide schools and communities in utilizing effective evidence-based prevention efforts.”