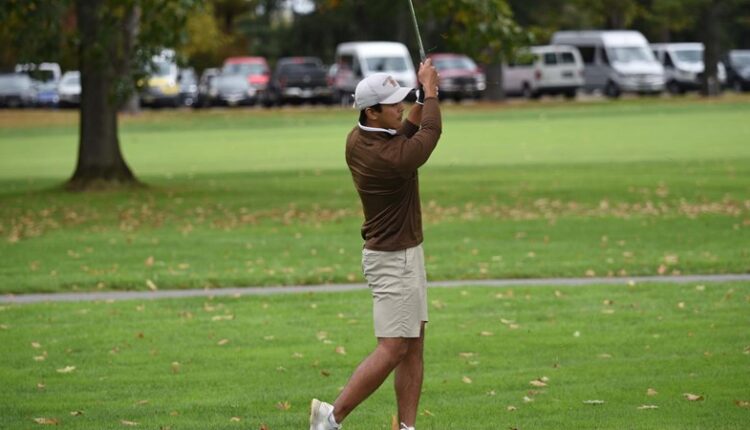 HELLERTOWN, Pa. – Junior Daniel Song led the Lehigh men’s golf team shooting two under par 70 in the final round to finish in fourth place at the Patriot League Championship at The Steel Club on Sunday. The Mountain Hawks improved 10 strokes from round two shooting 292 and tying for fourth overall at 891 (297-302-292).

Song finished at 217 (73-74-70) for the tournament to earn a spot on the All-Patriot League first team. His round included four birdies, going three under par in his last 10 holes.

Junior Sam Barton earned a spot on the All-Patriot League second team after posting a score of 222 (74-75-73) and finishing in a four-way tie for 10th place. Barton started the last round four over par through the first five holes but battled back with five birdies to shoot 73.

Classmate David Hurly was Lehigh’s next best finisher in a tie for 25th place at 227 (76-76-75). Hurley battled back in his final round, going one under in his last six holes.

First-year Jahan Bains finished in a tie for 30th for the Mountain Hawks with a score of 229 (74-77-78). His final round included one birdie on the par 4 sixth hole.

Sophomore Edmund Broderick also rebounded with a final round score of 74 to finish in a tie for 35th place at 231 (78-79-74). Broderick finished his last eight holes of the tournament at two under par.

Lafayette’s Ryan Tall made a long birdie putt on the 18th hole of the final day to shoot a tournament total of 212 and force a playoff with Loyola’s Carlo Pizzano for the individual championship. Tall closed Pizzano out on the first playoff hole, making another long, breaking birdie putt to win the individual title and earn a spot to go to regionals as an individual.

With no seniors on the roster the Mountain Hawks will return their entire Patriot League Championship team for 2022-23.