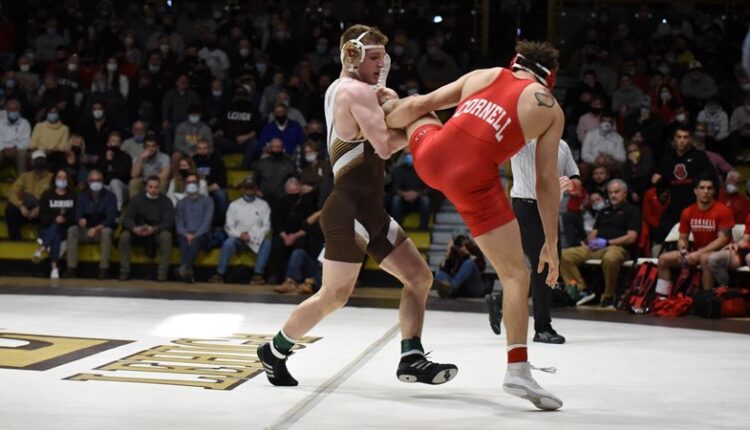 To be eligible for the award, a student-athlete must have earned a cumulative grade-point average of 3.20 and participated in the EIWA Championship or achieved a cumulative GPA of 3.0 and qualified for the NCAA Championship through the EIWA. Lehigh’s six honorees were among the 105 wrestlers recognized from the 17 EIWA member schools.

Logan led the Mountain Hawks for the second straight year as he carried a 3.66 GPA in finance. He finished fifth at the 2022 EIWA Championship at 174.

Meyer is also a repeat honoree from 2021. He carries a 3.51 GPA majoring in mechanical engineering. Meyer qualified for his second consecutive NCAA Championship at 165 after earning an at-large berth.

Along with his many on the mat accomplishments that included a record fifth EIWA title and a third All-America honor with a third place finish at the NCAA Championships, Wood is recognized once again for academics as he holds a 3.39 in management.

A two-time EIWA champion and third place finisher at 157 in 2022, Humphreys also majors in management and holds a 3.38 GPA. Humphreys went 20-5 this season and reached the All-America round of 12 at the NCAA Championships.

A second-year wrestler with first-year eligibility, Seymour stepped in at 125 late in the season and ended up finishing sixth at the EIWA Championships. He was the first alternate for the NCAA championships but would not have been able to compete due to an injury suffered at EIWAs. Seymour holds a 3.13 GPA in Lehigh’s College of Business and Economics.

Burkhart qualified for his first NCAA Championship with an impressive run to third place at 184 at the EIWA Championships. He carries a 3.12 GPA majoring in earth and environmental science.

Why Nurses Are Raging and Quitting After the RaDonda Vaught Verdict