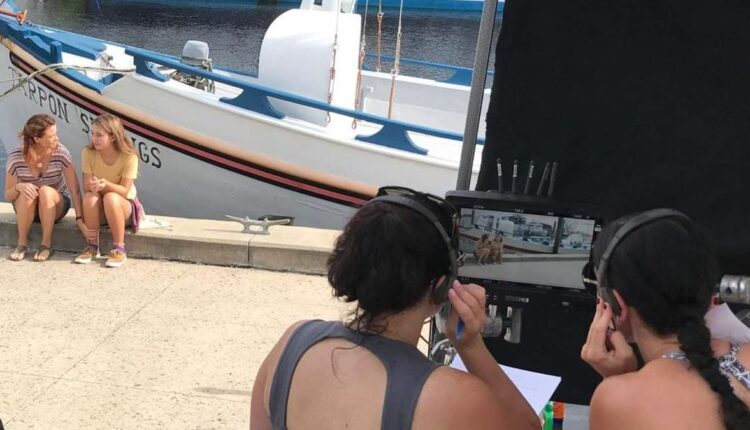 Their father was an auto mechanic who worked long hours, but when they visited relatives in Tarpon Springs each summer, they were on vacation.

“We liked seeing him in that element,” Kazista, 46, said. “It was like he was in Greece again. There are places you go where people don’t speak English, just Greek. That was something that hit home for us. …It was a magical place. It was so odd and beautiful and different from where we lived.”

Kazista, who now lives in a city eight minutes away from her hometown, and Sossiadis, who now lives in Bethlehem, spent more than a decade in New York working in various roles in the film industry. But their Tarpon Springs vacations never left their minds.

More than 30 years later, the city is the backdrop for the movie Epiphany, which the sisters wrote and directed and will be premiering at a sold-out screening at the Sarasota Film Festival on Saturday.

The film, which Kazista started writing in her head as a teenager, follows the story of a young woman named Luka who is trying to connect with a negligent father and uncle struggling with addiction. The film revolves around familial relations and is an homage to Tarpon Springs and their Greek heritage, Kazista said.

“We’ve definitely been very interested in our heritage and where we’re from,” Sossiadis, 47, said.

The movie was shot during the summer of 2017, and features scenes at the Spring Bayou, the Sponge Docks, Fred Howard Park and St. Nicholas Greek Orthodox Church.

Though the title Epiphany is used in a spiritual sense to reflect the awakening of characters in the film, the sisters incorporated the popular religious event. They returned in 2018 to shoot drone footage of the actual cross dive and re-created the event using local extras to dive for close-up shots.

Though the protagonist was initially a little boy, Kazista said Sossiadis suggested the sisters, who each have daughters, take the opportunity to write about a little girl.

“It is very interesting that the Epiphany celebration in Tarpon Springs is for males,” Sossiadis said. “It was very interesting to put into the story what if the girl wanted to dive and get good luck for her family, so Luka is fighting to have her own independence.”

RELATED:Epiphany cross diving is boys only in Tarpon Springs. Some say it’s time to change.

Gender, Kazista said, plays a role in the film set in a city where traditions remain strong.

“We were attracted to Tarpon Springs because it was Greek and they still live by their old ways,” she said. “Their tradition is that the boys dive into the Epiphany. The world is changing.”

Kazista said it was important to cast Greek actors to keep their film authentic.

“I think we both get kind of annoyed when we see actors who are supposed to be Greek, but we know they’re not Greek,” she said.

The film stars Los Angeles-based Caitlin Carmichael, whose previous roles include the television show Dwight in Shining Armor and the movie Life Itself and the Australia-based Alex Dimitriades, who had won the Australian Film Institute’s award for Best Lead Actor in Television Drama and has had roles in Ghost Ship, Head On and Deuce Bigalow: European Gigolo.

You’ll get a remembrance of Tampa Bay residents we’ve lost, including heartwarming and amusing details about their lives, every Tuesday.

You’re all signed up!

Want more of our free, weekly newsletters in your inbox? Let’s get started.

Explore all your options

One supporting actor told them he was grateful to play a Cypriate, Kazista said, because he is usually cast as a terrorist.

George Billiris, owner of St. Nicholas Boat Line in Tarpon Springs and a close friend of the sisters’ cousin, lent the sisters a sponge boat built in 1935 he had worked on as a kid.

“It was in pretty bad shape,” he said. “We had it dismantled, which I was upset about. …That one had seen its day. It’s actually a historical boat. I didn’t have the resources to refurbish and fix it so we had to let it go. It’s nice it was in the movie.”

There’s only two others left, he said, one that has been pulled from the water and one the city bought.

“When those things are gone you’re not going to see them anymore,” he said. “You see something here you can’t see anywhere else on this hemisphere.”

“It’s great people think of St. Pete/Clearwater, but it’s great to see Tarpon Springs have that exposure,” he said.

Armer said especially in the absence of statewide tax incentives for filmmakers, the film commission has focused on attracting smaller budget films, which he said contribute directly to the local economy. Epiphany cost less than $2 million, he said. The commission worked with the film to help connect them with local crew and location logistics, he said.

RELATED:Florida may get into the business of backing films again if state bills pass

“There’s always the perception that ‘why should we give money away to Hollywood big wigs, but that’s not how it works,'” he said. “It’s a lot of local people in blue collar jobs, electricians and truck drivers that work on film sets.”

Armer said 10 people were hired locally and 600 hotel room nights were booked while the cast was filming.

The sisters have a second screenplay in the works. Sossiadis said they hope to continue telling female-centric stories.

Kazista said seeing the film finally screen will be rewarding.

“We’re in our 40s,” she said. “We’re not young, but this is something we’ve wanted to do our entire lives. If you have a dream, dreams really do come true. It sounds corny, but every day putting work into it, and not giving up. That’s a big part of this for me.”