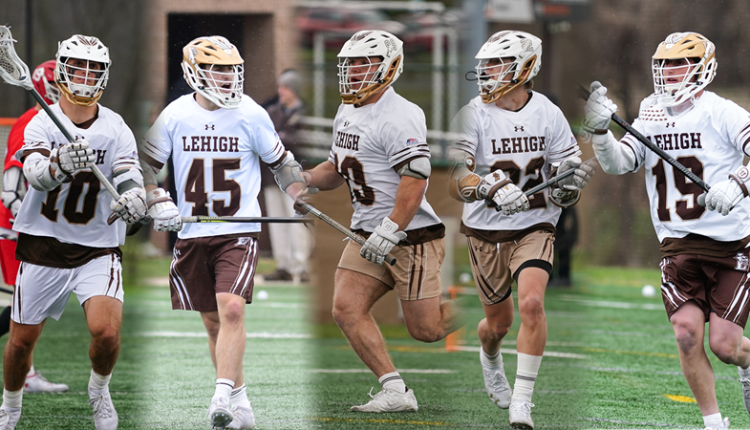 This marks the fourth straight season (in which postseason awards were given) that the Mountain Hawks have had at least five All-League honorees.

Sisselberger stands fourth nationally in faceoff percentage, winning 62.5 percent (193-of-309) with 114 groundballs. He’s also third in the nation in groundballs per game (8.77). Sisselberger has won Patriot League Faceoff Specialist of the Week three times in 2022 to increase his already league record to nine in his career. One of 25 Tewaaraton Award nominees, Sisselberger won 18-of-22 against Navy in the Patriot League opener, 17-of-25 at Army West Point and 20-of-27 vs. Bucknell. He opened the season with a dominant 14-of-16 effort at NJIT and also won 20-of-26 against Holy Cross. He’s also up to 298 career groundballs, on the verge of becoming just the third player in program history to reach 300. His 193 faceoff wins are fourth in Lehigh men’s lacrosse history.

Cole has enjoyed a breakout season, and one of the best seasons for a midfielder in program history. He stands second on the team in goals (27) and third in points (35). He’s tallied a career-high five points on two occasions – recording three goals and two assists against Bucknell and last Friday at Loyola. Cole has multiple points in 12-of-13 games this season, including eight multi-goal games. He’s scored at least one goal in every contest. In the second game of the season, he exploded for a career-high four goals at Hobart. As a first year, Cole posted 11 goals and two assists in 12 games.

Schelling earned his second straight All-League honor, after receiving first-team recognition as a junior. This season, Schelling leads the Mountain Hawks in assists (35) and points (55) – both career highs. He’s had at least one point in all 13 games, with multiple points in 12 of them. Schelling ended the regular season with six consecutive games with 5+ points, tallying 13 goals and 18 assists in that stretch. Schelling’s 2.69 assists per game are second in the Patriot League and eighth nationally, while his 4.23 points per contest are fifth in the league and 30th in the nation.

Spence was named All-League for the first time in his career. He was named an honorable mention All-American last season. Spence stands eighth in the country (and second in the league) with a 9.80 goals against average; he’s the anchor of a Lehigh defense that’s seventh nationally in scoring defense (9.69). Spence is also 27th in the nation with a 53.0 save percentage. Like Schelling, he’s played his best down the stretch, posting at last 12 saves in each of his last five games. Spence made 14 saves, allowing just nine goals against Boston University before following with 15 saves, including many spectacular stops, at Loyola Friday. Over his last five games, Spence has 67 saves, allowing just 50 goals.

The fourth-seeded Mountain Hawks return home on Tuesday night to host No. 5 seed Navy at 7 pm in the Patriot League Quarterfinals. The winner will advance to Friday’s semifinal round, hosted by top seed Boston University.

What’s Next if ‘Roe v. Wade’ Falls? More Than Half of States Expected to Ban or Restrict Abortion