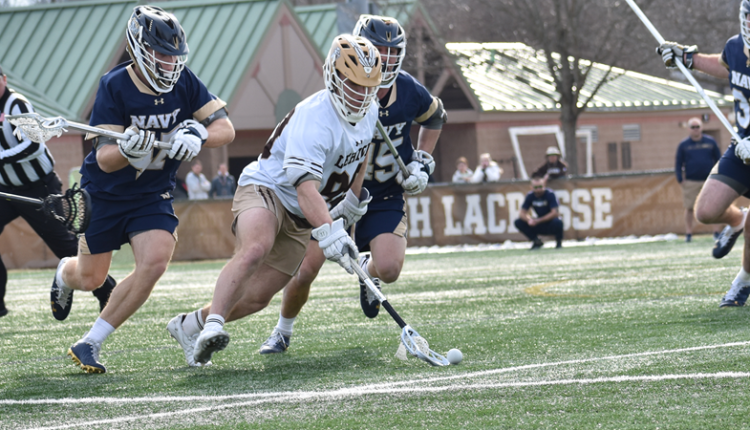 BETHLEHEM, Pa. – Lehigh men’s lacrosse senior Mike Sisselberger was named Patriot League Faceoff Specialist of the Week on Monday for the second time this season and record-breaking eighth time of his career, following a sensational effort in Saturday’s 11-7 win over Navy. The eight Faceoff Specialist of the Week awards breaks a tie with Dan Grabher ’17 of Army, who won it seven times during his career.

Sisselberger finished Saturday 18-of-22 in the faceoff circle with 13 groundballs and one goal, scored in the fourth quarter. The goal gave Lehigh an 11-7 lead, helping seal the win. Sisselberger won all 10 faceoffs in the second half (and his final 11 taken in the game) in a dominant effort. This came against a Navy team that had won 57 percent of its faceoffs through the first five games coming in.

— Lehigh Lacrosse (@LehighLacrosse) March 7, 2022 Also recognized among the honorable mention were graduate students Teddy Leggett and James Spence. Leggett had four groundballs and two caused turnovers, while Spence finished with 10 saves, all over the final three quarters. The defense held the Midshipmen to just two goals over the game’s final 43:01 and a season-low seven for the game.

The Mountain Hawks will remain home to host Holy Cross next Saturday at 1 pm on ESPN+.

In a big year, here’s how Pa.’s progressive groups are making their presence felt | Analysis