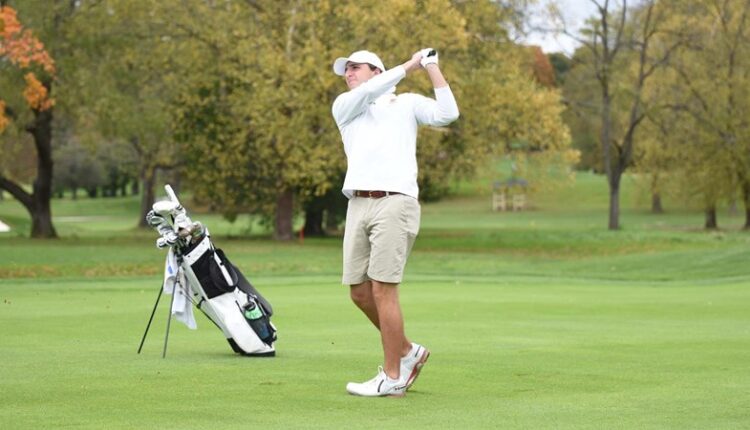 GLADSTONE, NJ – It required a monumental comeback, but the Presidents Cup is staying in Bethlehem for another year. Lehigh trailed Lafayette 6.5-3-5 after eight doubles matches and the first two singles matches in the annual match play event Thursday at Hamilton Farm Golf Club. With the Leopards a mere 2.5 points from winning the cup, the Mountain Hawks dug in and did not lose another match.

Lehigh won three of the seven remaining matches and halved the other four to tie the Leopards 8.5-8.5 and retain the cup by way of last year’s victory. In the Ryder Cup-style format, the Leopards needed nine points to reclaim the cup, but Lehigh’s 8.5 points allowed the Mountain Hawks to hold onto the trophy for the second straight season.

Sophomore Edmund Broderick and juniors Daniel Song and David Hurly delivered the key singles victories, helping Lehigh gain a 6-5 lead in the Presidents Cup history, which dates back to the fall of 2011.

The day began with four better ball doubles matches, where Lafayette claimed two victories to take an early 3-1 lead. Juniors Joey Dotta and Alex Aurora and the team of Broderick and Song helped Lehigh to his lone point from the first two matches.

Lehigh battled back in the alternate shot doubles matches with the first-year duo of Aidan Oehrle and Jahan Bains winning 2 and 1 over Kaz Osawa and Ray Dennehy and Broderick and Song winning 1 up against Ryan Tall and Drew Steiner. Juniors David Hurly and Sam Barton halved their match as Lehigh trailed 4.5-3.5 going into singles.

Lafayette claimed the first two singles matches to go up 6.5-3.5 but would not win another match on the day. Dotta, Bains and Oehrle halved their matches to keep Lehigh alive. A 2 up win for Broderick over Martin Vanhaelst in the sixth match and a 1 up victory by song over Dennehy at No. 7 brought Lehigh within 8-7.

Barton and Tall halved their match, getting Lafayette to 8.5 points. Needing a win to retain the cup for the Mountain Hawks Hurly, the reigning Patriot League Golfer of the Week delivered a 2 and 1 win over Osawa in the final singles match to tie the score and ensure that the Brown and White would retain the cup.

Lehigh will next shift focus to the Patriot League Championship, hosted by Lafayette, April 29-May 1 at the Steel Club in Hellertown.

The Presidents Cup is staying in Bethlehem for another year! 🏆 pic.twitter.com/EmYsBo56oV