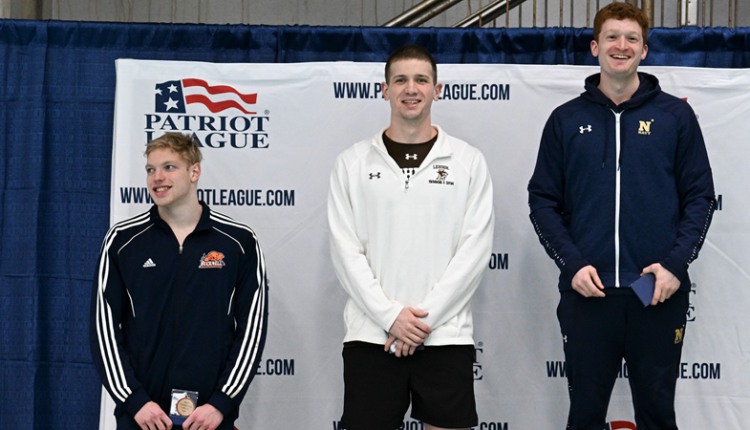 ANNAPOLIS, Md. – Senior Owen Thomas claimed his first career silver medal, finishing second in the 100-yard backstroke final Friday night at Lejeune Hall, headlining the men’s third day of the Patriot League Championships. His new school record time of 48.53 broke his school record time of 48.73, which he set earlier in the preliminary round. Thomas earned the Mountain Hawks 17 points in the event as Lehigh sits in seventh place at 133 points heading into the final day of competition on Saturday.

Thomas and fellow senior Connor Sept set the tone for Lehigh heading into the final round Friday evening by both scoring school records in the 100-backstroke and 100 breaststroke, respectively. Sept’s 55.55 broke his previous school record of 56.11 from 2020. Thomas also broke his initial school record time of 48.95 from back in 2020 as well.

Senior Glenn Lasco qualified for the B-Final of the 200-yard freestyle and nearly pulled off a victory before being beat from behind by Army’s Wes Tate, swimming to a second-place time of 1:38.59 and finishing the event 10th overall with seven points.

After setting the new school record earlier in the day, Sept swam the B-Final of the 100-yard breast, clocking in at 56.27 for eighth place, finishing 16th overall.

Fifth year senior Joe Huber finished fifth in the B-Final of the 100 Back with his time of 50.45, which preluded Thomas’ silver-medal performance in the A-Final.

On the diving board, senior Addison Cochran scored a 224.85 in the one-meter, marking his final dive of the season.

The fourth and final day of the Patriot League Championships kicks off Saturday at 10 am for the prelims and 6 pm for the finals to conclude the 2021-22 campaign for the Mountain Hawks. Both sessions will be streamed live on ESPN+ (subscription required).