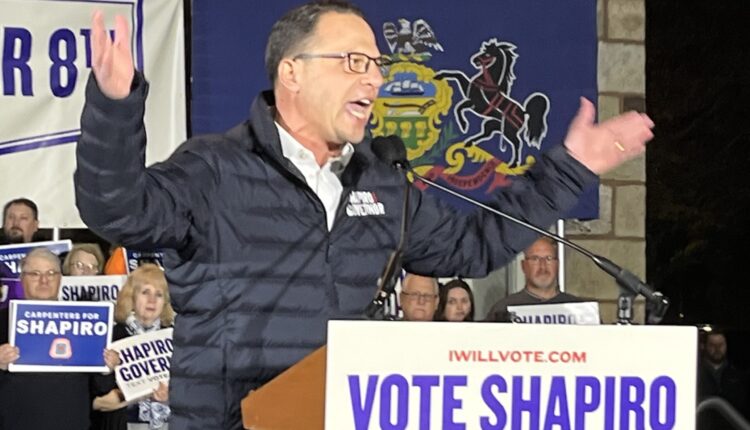 Shapiro speaks of opportunity for Pa., delivers dire warnings about his opponent

Pennsylvania voters are five days away from the most crucial election of their lifetimes, Democratic gubernatorial nominee Josh Shapiro told supporters at a rally Thursday in Harrisburg.

Shapiro spoke about his vision to create a stronger commonwealth for Pennsylvania residents and their children. He recounted his “big fights” as attorney general jailing thousands of drug traffickers and holding corporations that harmed the public accountable.

But Shapiro also spoke in no uncertain terms about the dire threat to freedom and democracy his opponent’s election would bring.

“I got another big fight in me and it comes in five days when we defeat Doug Mastriano,” Shapiro said, calling the Republican gubernatorial nominee dangerous and extreme.

Shapiro delivered an energetic and impassioned speech before a crowd of a few hundred people in front of Harrisburg’s Broad Street Market. Members of organized labor groups including the Teamsters and carpenters union formed an animated backdrop behind the stage.

Davis, a state representative from Allegheny County, noted he would be the first Black lieutenant governor, and the highest-ranking Black elected official in Pennsylvania’s history. 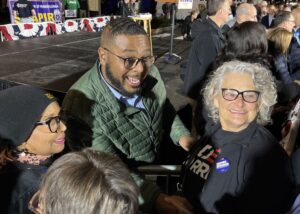 He spoke about his entry into public service after going to a city council meeting out of concern about a shooting on his block when he was a student.

“There were two things that I noticed when I was at that meeting; one, nobody was tackling the issue of gun violence, and no one serving in city government looked like me,” Davis said.

“The decisions we make each and every single day disproportionately affect Black and brown communities all across this commonwealth and that’s who ought to be sitting at those tables, making those decisions for our communities,” Davis said.

The rally was Shapiro’s first speaking appearance as a gubernatorial candidate in Dauphin County., And it was part of a statewide bus tour in the final week before Election Day on Tuesday.

“When I think about this moment that we are in, I see great opportunity for our commonwealth. I also see a whole lot of work we need to do to defend our fundamental freedoms, and protect our democracy,” Shapiro said.

Shapiro said his priority will be education, moving away from the reliance on standardized testing, restoring vocational, technical and computer training in high schools, and protecting students’ welfare and safety by providing a mental health counselor for every school.

To keep communities safe, Shapiro said he will support hiring more police officers with an emphasis on recruiting them from the communities they serve.

And to build an economy that lifts everyone, Shapiro said he would raise the minimum wage to $15 an hour, compete with other states for industry and jobs, and “connect the dots” between the universities that are developing new technologies and the workforce needed to use  them.

Shapiro said that while Mastriano’s promises to ban abortion, curtail LGBTQ rights, and attack unions are threats to freedom, his record as an election-denier makes him dangerous to democracy.

If Mastriano is elected governor, he would use his power to control elections through his appointee for secretary of state, review election logs, and make corrections and decertify voting machines, Shapiro said.

Despite the nation’s frustration with politics and the sense that its problems are unfixable, Shapiro said he stood before the crowd as “a person who’s full of optimism.”

“The reason why I’m optimistic is because in every chapter of our American story, it’s been written not by people with titles next to their name, but by ordinary Americans who see a challenge before them and decide to speak up, decide to rise up, decide to look for a more just society.

“They look their children in the eye and say, we are going to leave this place better for you than the way we found it,” Shapiro said.

He urged supporters to make a plan to vote and reach out to others to ensure they understand the importance of voting.