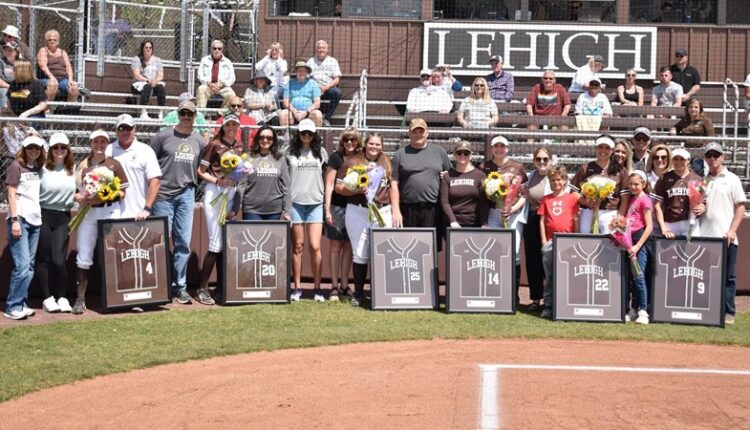 BETHLEHEM, Pa. – Trailing 4-0 heading to the bottom of the sixth inning, the Lehigh softball team exploded for a seven-run inning to take the lead and then held off Colgate late to edge the Raiders 7-6 Sunday on Senior Day at Leadership Park. Junior Josie Charles delivered the go-ahead two-run triple in the sixth to give Lehigh the series win over Colgate in its final home game of the regular season.

Lehigh’s sixth-inning rally began with a one out single by senior Jaelynn Chesson, who then came all the way around to score on a double down the left field line by classmate Addie Kittel. Run-scoring hits by sophomores Brooke Cannon and Amanda Greaney brought the Mountain Hawks within 4-3.

Charles then re-entered the game with two outs and laced a 1-0 pitch into the gap in left center scoring senior Karsen O’Rourke and Greaney with the tying and go-ahead runs.

Lehigh added on two more runs in the frame on RBI singles by Barjaktarovich and Chesson.

Colgate refused to go quietly in the seventh, pulling within 7-6 on a two-run double by Steph Jacoby. With runners on first and second and nobody out, senior Gabriella Nori settled down, getting the next two batters to pop out before retiring Rebecca Carney on a ground ball to O’Rourke at second to end the game.

With Lehigh shorthanded in the circle, Nori battled through seven innings, allowing six runs (five earned) on 10 hits. She walked two and struck out one, improving to 9-9 on the season.

A seven-run sixth led to a series win on Senior Day!

The Mountain Hawks will close out the regular season with three games at first-place Boston University next weekend. Lehigh will need to sweep the Saturday doubleheader and Sunday single game to clinch the regular season title and earn the right to host the Patriot League Tournament May 12-14. Action both days in Boston will begin at noon.