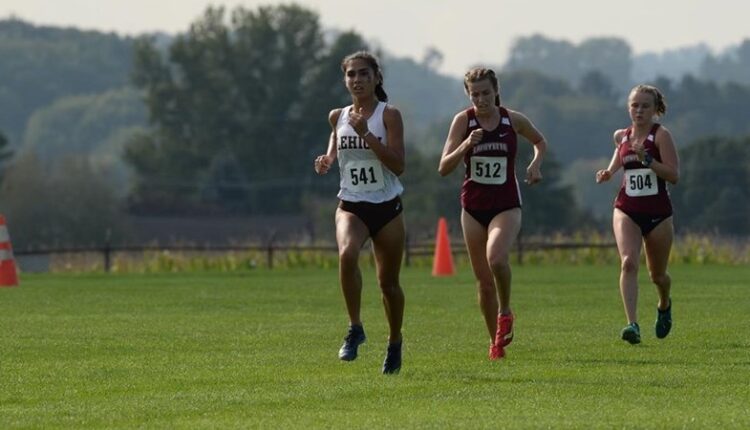 In eighth grade Jade Sessions would have never known she would be running in the Patriot League Championships as a Mountain Hawk; “poise” is a word that her coaches and teammates commonly describe her as, a characteristic she has carried with her since then.

Growing up in Carmel, New York, sessions was a constant superstar, both on and off the track; she was named an All-Section performer, three-time first-team All-County team member, New York Section I Sportsmanship Award recipient and member of the National Honor Society.

In high school, sessions joined the cross country team and quit soccer; for years to follow, she fell more in love with training, competing, teamwork, and the sport itself. She soon realized she was interested in pursuing the sport in college.

Sessions herself explained that she achieved goals she had set for herself in certain 4X800m relays, which made her a standout during the recruitment process.

“My coach had expressed to me that I had the ability to run Division I track and field in college,” she said. “By my junior year, I ran all three seasons for my high school team and also played on one travel tournament lacrosse team.”

Sessions’ resilience has continued to grow throughout each season, and credits her teammates for providing each other with support and encouragement throughout the season.

“College has been a huge period of development for me,” said Sessions. “I have grown from so many different experiences while at Lehigh that have made me a harder worker, more resilient and more willing to accept challenges. “My teammates and I are super close and trusting of each other, so it’s super easy to enjoy being together in and outside of practice, even during difficult times of the semester when we’re in the middle of midterms as well as the championship season.”

Sessions explained that her motivation for running is exponentially greater when she is around her teammates. Amongst these teammates is track and field runner Hetty McMillan, ’22, who says that Sessions always reminds the team how important teamwork and team support is.

McMillan also explained that training with sessions is always enjoyable and calming because of her positive demeanor yet strong presence on the track.

“She never seems to feel or express defeat during workouts no matter how hard the reps are,” said McMillian. “This not only encourages and motivates me, but her presence also positively influences all of our other teammates partaking in the workout.”

Utesch said, “When it’s a hard workout that is going to feel uncomfortable, she brings a calming and poise to the workout. Pre-competition, when everyone is managing pre-competition nerves, she just brings poise and a sense of calm to the team.”

Utesch has noticed sessions growing immensely throughout her career on both the cross country and track and field teams.

“Jade always puts the work in and wants everyone to get the work done,” said Utesch. “She has grown so much and because of the respect that she has garnered from her teammates through her performance, when she does speak, people really listen and absorb what she has to say.”

Sessions’ poise will have a lasting impact on the Mountain Hawks, as she will graduate and carry her success with her in her post-Lehigh career.

What will the next generation of military leaders learn from our years of upheaval? | Opinion

A bill regulating herbal stimulant kratom looked different after a Pa. House panel got done with it