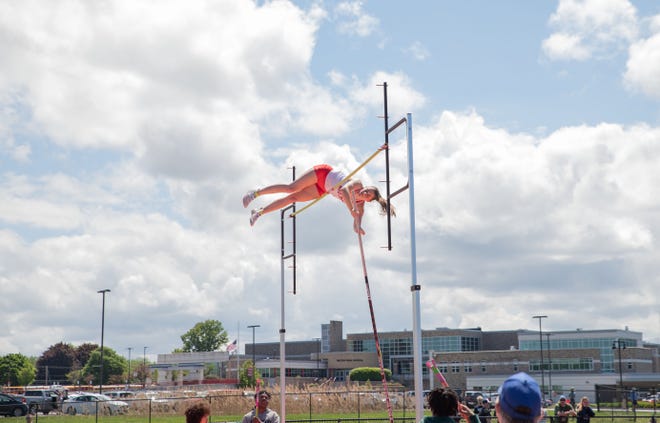 Her last chance was the best chance, Laura Reigle figured.

If she was going to break the Section V pole vault record, the Hilton senior had “home court” advantage Saturday, the weather was just about perfect, Hilton’s spiffy five-year-old LeBeau field sported brand new red landing mats in the pit and . . . her senior ball is next week.

“It’s true,” she laughed, finally breaking into a smile after just missing three vaults at 13 feet, 3 and a half inches. While she won an unprecedented eighth sectional title in pole vault with a 12-10 leap, it was the last three near misses that left her forlorn, sitting all alone and ruing what might have been at the Section V outdoor track and field championships.

The meet included classes A1 and B1, for the biggest schools in track’s two divisions.

“I tried really hard at it,” Reigle said. “My first one was closest. Just brushed the bar.

“I’ll treat next week’s state qualifier as a fun meet now because I’ll have to leave early for the ball. Not sure what height I’ll start at yet (Saturday she came in at 11-6) but I know I won’t have time to do nine jumps like today.”

The Reigle vaulting legacy is assured, though. Raising the bar ever so steadily since seventh grade, the six-time All Greater Rochester first-teamer and athlete of the year for the ’20-’21 indoor season wraps up her Hilton Cadets career with a trip to the ball with her date, then graduation, then off to Lehigh University in August to continue her career.

Reigle’s teammate won the boys competition as well, as Jacob Schindler cleared 13-0 and edged three others – one of them teammate Hayden Penna – all at 13-0.

First one for Thomas

“As far as we know,” said Kieffer, who’s in his 12th year of coaching the varsity. “It’s the first one. Certainly since we’ve had two high schools.”

Stephany, who’ll compete as an electrical engineering major for Rochester Institute of Technology next season, defended his two 2021 titles with a 47-3.75 throw in the shot put and a 150-0 in the discus.

His shot distance was just an inch short of his personal best.

“I was very happy with that,” he said. “Especially since I didn’t have any fouls. That’s been something I’ve had to deal with.”

Webster’s girls throwers, for both Thomas and Schroeder, dominated in discus. Skylar Klimov of Thomas led the way by winning with a 113-06. Then the district placed 2,5,6,7 and 8.

Thomas’ Connor Thomas steeplechase victory was the only other first place for the Warriors, but add in three seconds, six thirds and two fourths from others on a team of 36 and it resulted in a winning formula.

Thomas senior Jackson Gloskey, indoor champion in the 55 hurdles, re-injured a hamstring muscle finishing second in the 110 hurdles. He was seventh in the long jump.

“He did what he could,” Kieffer said. “So many other guys stepped up. I’ll have a hard time choosing an MVP for the banquet. Maybe multiple MVPs!”

It’s their fifth one overall, following three titles in the 90s, and predictably led by their senior-junior duo, Maddie Pitts and Melody Griffith against Schroeder’s sophomore-junior-senior trio of Corintia Griffith, Camryn Cole and Sierra Doody.

Look at this rivalry:

Add senior Logan Brasacchio to that mix for Victor, second in the 2,000 steeplechase to Brighton’s Ava Voss and second in the 400 to Harloff, and it resulted in a 140-137.5 final score.

After they finished the 400, Brasacchio dropped to the turf and Harloff came running over and immediately started rubbing out Brasacchio’s cramping muscles.

“She’s like that all the time,” Brasacchio said. “Here she wins the race, but she’s always looking out for the rest of us. She’s helped me so much I can’t tell you.”

Victor coach Austin Donroe credited his team’s depth – about 50 in all – and a season mainly free of any major difficulties as factors in their successful title defense.

“Sierra is absolutely the hardest worker I have ever had in my 35 years of coaching,” said Schroeder coach Dan Graf. “She is phenomenal.”

Doody’s running only the 3,000 next Friday at state qualifiers and not states, at Cicero-North Syracuse the following weekend, even if she qualifies. She says she’s committed to her senior trip that weekend.

His dad could have been all over him when it was time to compete Saturday.

But that’s not Matt Buffum’s style.

The Webster Schroeder assistant coach told his sophomore son, Dylan, to just “relax and have fun.”

No technical stuff, no block technique.

Then Matt stood back and watched with pride as Dylan reeled in the second sectional title in his family.

Dylan said he reminded himself to “stay tall. Dad said ‘do your job.’ ”

The younger Buffum’s time was 50.82, not quite his personal best (50.45 set the week before at the Monroe County championships) but good enough to edge Victor junior Colden Chierichella by about a half second.

She also attracts attention for her footwear.

“You racing without spikes?” she was asked more than once.

“No,” she laughed, “these are old Nike racers. See, they have spikes,” as she turned her foot up. The shoes are a well-worn, dull green and grey.

“I get asked that all the time! They’re still working fine for me.”

Note a splendid pentathlon performance by Fairport’s Naim Abdullah. A senior, he won the high jump and long jump to score 2,832 points, fourth-best on Sec. V’s leaderboard . . . Brighton’s Voss fell in the 400 hurdles and didn’t finish, and said her victory in the steeplechase left her feeling a lot better. But she said she’s “still not satisfied.” Her time was 7:33.54, fourth on the leaderboard. . . RH senior Gabe Watson collected his second 800 title in as many years. The younger brother of RH greats Ceara “CeCe” and Sammy Watson had to work for it at the end. “I got the job done. It wasn’t pretty though,” he said. Webster Thomas’ Jerry Lewis closed almost and was just a tenth of a second behind at the finish. . . In the relays, Schroeder’s girls winning 1,600 relay, anchored by junior Shelby Boise, gained a measure of revenge over Victor’s four with a 4:12.76 time. Victor was fourth in 4:15.78, well off his season-best 4:05.95. . . RH junior OJ Singletary claimed the sprint titles in the 100 (11.04) and 200 (21.93). Brighton eighth grader Will Vitale pushed him hard in the 100 (11.13) . Singletary’s 400 relay also won . . . RH’s other double-winner, Canyon Frost, long-jumped 20-5 and triple-jumped 41-10.

Jim Castor, retired assistant sports editor of the Democrat and Chronicle, has covered high school sports in the Rochester area for more than five decades. He can be reached at [email protected]