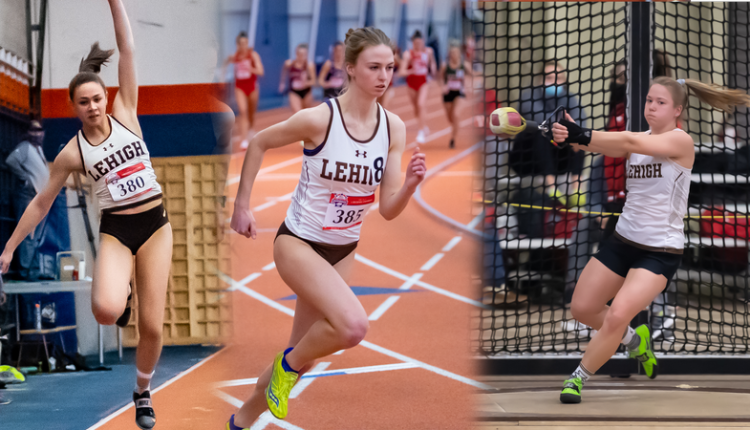 BETHLEHEM, Pa. – The Lehigh women’s track and field team will return to competition on Friday as the team kicks off its much anticipated 2022-23 season. The Mountain Hawks will open up the season with their annual two-day Fast Times Before Finals from Dec. 2-3 at Rauch Fieldhouse.

Coming off of fifth-place finishes in both the Patriot League indoor and outdoor championships last season, Lehigh’s upperclass student-athletes will look to raise the bar this season. Two relay teams and three individuals secured spots on the podium during last year’s Indoor Patriot League Championships and 15 student-athletes contributed to the team’s fifth-place finish.

jumps
Lehigh will have depth in the jumps events with several upper classmen returning this season. In the high jump, senior Calista Marzolino and junior Kerry Perna will look to replicate their success from last season. Marzolino found herself on the podium during the indoor championships, finishing third overall. Perna, who won the high jump at the Lafayette Dual, recorded a 13th-place finish at the indoor Patriot League Championships.

Joining Talamini-Kelemen in the long and triple jump are senior Rachel Sequeira, junior Nina Cialone and fellow sophomore Keisha Modi. At last year’s indoor championship, Talamini-Kelemen earned a spot on the podium, finishing third in the triple jump. Cialone finished ninth overall while Sequeira finished 13th for the Mountain Hawks. Modi earned points for Lehigh in the long jump at the Indoor Patriot League Championship. She finished seventh overall with Sequeira following close behind in 12th.

throws
Lehigh’s throws group will look to have its upperclass student-athletes step up and fill leadership roles this season. Junior Karina Roze will look to build off of her success from last year’s indoor season. Roze wrapped up the 2021-22 indoor season with a fifth-place finish in the weight throw at the Bucknell Tune Up before ending the season with a 16th-place finish at the indoor championships.

Hurdles/sprints
The Mountain Hawks will add depth in the sprints and hurdles events, with several student-athletes returning to compete for Lehigh this season. In the sprints, juniors Claire Pedrick and Jordyn Hock will compete alongside sophomore Stephanie Webb. Pedrick won the 60m at the Bucknell Tune Up before securing a 13th-place finish in the 60m prelims at the indoor championships.

Hock wrapped up the indoor season on a high note, finishing second in the 200m and third in the 4×400 at the Bucknell Tune Up before ending the indoor season with a seventh-place finish in the 4×400 relay and 18th-place finish in the 400m at the Patriot League Championships. Webb had a stellar first-year for Lehigh last season. She was a member of the seventh-place 4×400 relay at the indoor championships and also finished 15th overall in the 60m.

Mid Distance/Distance
Lehigh’s mid-distance and distance runners will look to replicate their success from the 2021-22 season. On the mid-distance side, senior Elena Perez-Segnini and sophomore Amanda Mircovich will all compete for the Mountain Hawks. Perez-Segnini had several stellar performances last year, including an eighth-place finish at the indoor championships. Mircovich had an impressive first-year for Lehigh last season, picking up a silver medal with the DMR relay team at the Indoor Patriot League Championships.

On the distance side, senior Maddie Zaun and junior Christina Yakaboski will return for the Mountain Hawks following a solid cross country season. Fence wrapped up last year’s indoor season with a 16th-place finish at the Patriot League Championship. Yakaboski, who was named Academic All-League for cross country this year, earned a silver medal at last year’s indoor championship with a second-place finish with the DMR relay team. The junior also finished 11th in the mile at last year’s championship.

Lehigh season opener
Lehigh will welcome Delaware Valley, DeSales, Kutztown, Moravian, Muhlenberg, Stevens Institute and Temple to Bethlehem this weekend. The unscored meet will begin at 3 pm on Friday and 9 am on Saturday, with track events starting at 12 pm on Saturday.

Complete meet information can be found here. Live results for this weekend’s meet can be found on MitchellTiming.com.

KHN’s ‘What the Health?’: Medicaid Machinations