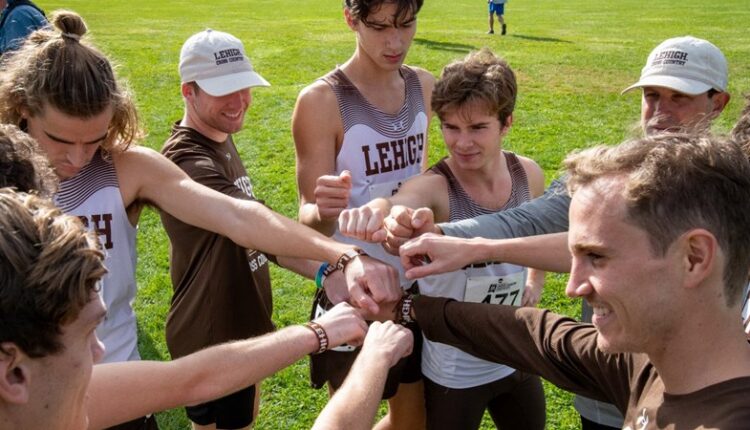 Coming off of a solid 2021 season, the Lehigh men’s cross country team welcomes eight first-years into the program as they look to raise the bar and continue to duplicate the success from the track and field season.

“The first meet, we actually only race the 6k but it’s a nice segway for not just the first-years but also for the guys that haven’t raced in a couple months so it’s nice to be able to get out, run a little bit less,” Etters said. “We will have a strong field of teams at that meet. The guys are amped up and ready to go so really what our strategy will be there is knock the rust off, stay calm, start to figure out what kind of team we really have when it comes to competitions.”

A key returner for the Mountain Hawks is fifth-year Nick Wilson, who has served as a leader in both the cross country and track and field programs. Wilson will share leadership roles with nine seniors returning for Lehigh this season.

“Nick has the ability to impact our program as an athlete,” said Etters. “That’ll be key for us but it certainly goes beyond that. I think he’s wiser, he’s developed into a really strong leader, he’s had a lot of different experiences that will help our team out so we’re going to be reliant on a fifth-year to be able to be a cornerstone of our program. We’ve been fortunate to have those over the years and I think Nick will be a stand out for us this year.”

Connor Melko and Tyler French are two seniors expected to have solid performances for the Mountain Hawks this season. Last year, Melko was a top finisher in five of Lehigh’s seven meets, including the Lafayette Dual meet where he took first overall. French finished second for Lehigh at the Lehigh Invitational and helped the Mountain Hawks secure their 22nd consecutive win over Lafayette, where he finished fifth overall.

Jacob Martinez, Joseph Cranley, and Riley Williamson return for Lehigh after having successful track and field performances last year. Martinez was a member of the first-place DMR at the indoor Patriot League Championships and won a second gold medal in the 4×800 relay at the outdoor championship. While Cranley was able to put up solid performances in the 800m last year, Williamson found success in the steeplechase during the outdoor track and field season.

“The senior class, I think they’ve really been impactful since they were first-years so they’ve progressed nicely,” Etters continued. “It’s exciting that they’re seniors, it’s a little bittersweet though that we’re already at a point where they’re in their last year. I think they’ll be the ones that will dictate how well we do this year. A lot of responsibility both as a leader and a performer but I know that group is ready for it.”

Lehigh returns one junior and three sophomores this year. Kevin Harvey and Aidan Lynch, who both had solid first-years on the cross country course and the track, are expected to be key contributors for the Mountain Hawks this season.

“I think we have a pretty dynamic group of sophomores even though there’s only three of them but Kevin and Aidan really progressed nicely as first-years,” said Etters. “They look great so far and it’s just exciting to know we’ve got a really strong group that’s probably going to take a big jump this year. Sophomore year in our program tends to be that jump year so I’m expecting to see that class really step up this year.”

Lehigh’s newest additions have traveled throughout the United States to compete here in Bethlehem. The eight first-years come from seven different states, with Connor Malinger being the furthest (Honolulu, Hawaii) and Alex Heidemann being the closest (Easton, Pa.). Although they’ve only been on campus for a few short weeks, the first years are starting to make their presence known within the men’s cross country team.

“What I always look for first is how well the first-years fit in with the rest of the team and with themselves,” Etters said. “As we expected during the recruiting process, it’s a great group of young men. They’re really respectful, really fitting in and buying in what we’re trying to do here.

“They’re really the epitome of what I think we look for in a student-athlete and I look forward to seeing how they do in their first competition but also just hearing back about how they do as students right away,” Etters continued. “In terms of their abilities, it’s always tough to put a first-year in a position where you’re expecting them to be high performers for your team but I think we have a group that there’s going to be a few people that emerge from the first years that can be high impact guys for us this year.”

“It’s nice to be at home to start the season,” said Etters. “It’s nice that we have the dual meet at home. The dual meet is a priority for us so we’ll be focused on continuing the streak there. Lafayette’s been a really good team so we’re going to focus on the task at hand that week and hopefully we’ll show up to that ready to go like we traditionally have.

“The Paul Short Run kind of doesn’t need an explanation,” continued Etters. “I think we’re going to be larger and deeper than we ever have been before so it will be nice for us to measure up on our home course with really the best teams in the country. It’s a nice luxury that we have and we want to take advantage of that weekend.”

After the Paul Short Run, Lehigh will travel to University Park, Pa. to compete in the Penn State Invitational on Friday, Oct. 14. Other members of the team will travel to New York City, NY for the IC4A Championship.

The Mountain Hawks will travel to Lewisburg on Oct. 21 to compete in the Bucknell Tune Up, their final regular season meet of the year. Eight days later, Lehigh will return to Bucknell to compete in the Patriot League Championship at 11 am

To close out the season, Lehigh will travel back to Penn State for the NCAA Mid-Atlantic Regional on Friday, Nov. 11.

“We start the first half at home and the second half is away. I think the thing that stands out to us is that we’re going to be on faster courses so we’re going to have to be prepared to run a little faster for cross country then maybe we would have to if we were running a really challenging, hilly course.”