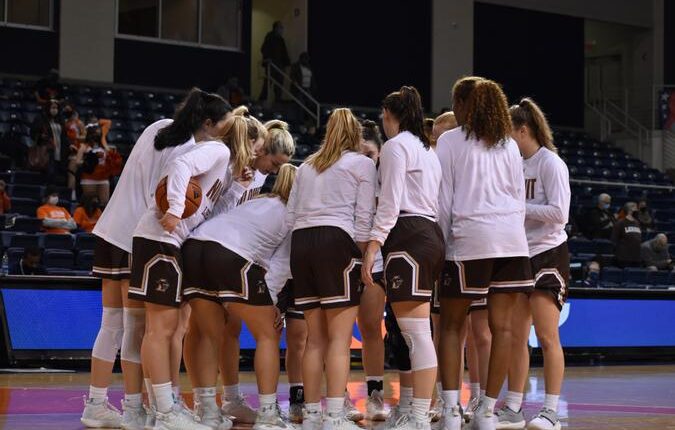 Season Preview: Lehigh Looks to Keep Sharing It and Shooting It


While the Lehigh women’s basketball team may look a little different this year as the Mountain Hawks graduated three starters and will have a new leader in head coach Addie Micir, the expectations are still just as high for this 2022-23 team that was projected to finish in second in the Patriot League preseason poll.

“We’re so excited,” said Micir. “We’re really meshing well, which is always a thrill for this time of the year. We’re going to look different than last year, but when we talk about different, it can be good because we have different strengths. We’ re still sharing it and shooting it. We had people come back better than they were last year, which is what you need.”

Share it and shoot it has been the team’s motto in recent years. The Mountain Hawks certainly do this and then some.

The Mountain Hawks set a Patriot League record, and a program record of 17 made three-pointers against Loyola last season. In that game, Lehigh also made 25 field goals, and 23 of those were assisted.

“It’s something we do,” Micir said. “It’s language to what’s been done. We like to put up a lot of threes, and we like it to be a high-assist game.”

One category the Mountain Hawks certainly don’t lack in is depth, as they have 14 players, 11 of whom are returners. The Mountain Hawks have three first-years, three sophomores, six juniors and two seniors.

Lehigh also wants to return three of his top five scorers from a season ago. Junior guard Mackenzie Kramer led the Mountain Hawks last season putting up a team-high 477 points, an average of 15.9 per game. Senior wing Frannie Hottinger was third in scoring and sophomore forward Meghan O’Brien was fifth.

“There’s a lot of depth at a lot of different positions, which I’m really excited about,” Micir said. “In all of the returners, what they have from last year is experience. A lot of them, even those that aren’t necessarily in the top three in certain categories, they’ve gotten better on the defensive end, and they’re more confident on the offensive end. So having that experience behind us and having the experience of being together for at least a year is going to bode well for the future.”

The senior class is led by Anna Harvey and Frannie Hottinger, who have played in over 60 games each. Harvey and Hottinger have been key contributors since they stepped on the court as first-years.

Harvey saw her most action last year, making six starts in 29 games. Harvey scored a career high of 13 points against Colgate. She also was second on the team in assists.

Hottinger battled through injuries last season while still playing in 20 games for Lehigh and averaging 20.9 points. Hottinger was one of two Mountain Hawks named to the Patriot League’s Preseason All-League Team. She earned first team All-Patriot League honors in 2021.

“As seniors, since the spring, we talked a lot about what senior leadership means, and that’s leading through experience, and leading can look a few different ways,” Micir said. “It can be being that first voice. It can be pulling someone along. It can also be walking with someone or pushing someone from behind. They’ve found ways to connect the team. They’ve found ways to motivate the team, and more importantly, those two lead by example every single day.”

With six juniors on the roster, this is Lehigh’s most stacked class. Maddie Albrecht, Fabienne Eggenschwiler, Jamie Behar, Jackie Vargas-Bines, Maggie Brown and Mackenzie Kramer all had valuable minutes and contributions to the Mountain Hawks.

Between the six of them, they’ve played in nearly 200 games while winning a Patriot League Championship in their first season.

Micir said they are some of the most improved on the team coming into the new season.

“The six of them are so different in terms of skill sets and personalities, but they put together to make a really solid class,” Micir said.” They bounce off of each other really, really well, and they each own their strength in terms of what they can bring, and it’s a class that’s developed together really well and individually really well.”

Behar, who won a gold medal with Team USA at the Maccabiah Games in Israel last summer, continues to get better. Behar knocked down a career-high 18 3-pointers last season and shot 100% from the free-throw line.

Vargas-Bines, who didn’t play in her first season, is another solid forward that the Mountain Hawks will look to rely on this season. Vargas-Bines scored a career-high of four points in a win at Lafayette.

Albrecht saw her role increase exponentially in her sophomore campaign, playing in all but one game. She recorded 51 rebounds, 45 points, 15 blocks and seven steals last season.

Brown, a guard/forward played in 13 games and scored the 3-pointer against Navy down the stretch to give Lehigh 99 points, which is the second-highest single game total in program history.

Eggenschwiler played in 17 games and saw the most action in a win over Delaware State, where she played a career-high 15 minutes.

While the sophomore class has only one year under their belt, they certainly have no shortage of experience between the three of them. Meghan O’Brien, Ella Stemmer and Kaylee Van Eps all played a lot for the Mountain Hawks in the 2021-22 season.

“They’re such a solid class, and that’s with their play on court, but it’s also with just who they are, ” Micir said. “They are three of the people that are always willing to help out when we have recruits on campus. They’re three of the people that go and celebrate other teams and watch them. They’re so invested and involved in Lehigh. I love that about them because they care so much, and they really care about our program too.”

O’Brien appeared in all 30 games, starting in 18 of them. The Centreville, Va, native was third on the team in rebounds and second in blocks per game while shooting 41.3 percent from the field. O’Brien was named Patriot League Rookie of the Week after recording 10 rebounds and scoring a career-high of eight points against Delaware State.

Stemmer appeared in all 30 games for the Mountain Hawks last season, where she put up 25 3-pointers, which was good enough for fourth on the team. Stemmer also recorded a career-high of 15 points in games vs. Navy and Loyola, where Lehigh broke the Patriot League record of made 3-pointers in a single game.

Van Eps shined in his first season, appearing in all but one game. She scored a career-high of 15 points vs. Navy. She also shot 42% from the field.

“We expect big things from them,” Micir said.”Last year, even as first-years, they were really steady for us. The three of them were on the court together in some really big moments in some of the biggest games, and they went in really unphased because they know who they are as basketball players, so I’m excited for that to really carry over, especially with the experience. I think there’s going to be big things ahead for those three.”

The Mountain Hawks have three first-years this season. Katie Hurt and Lily Fandre are from Minnesota, while Kamara St. Paul is from New Rochelle, NY

Hurt, who served as a team captain for two seasons at John Marshall High School, averaged over 12 rebounds, four assists and six rebounds, where she went on to be named an All-Conference Big Nine honoree.

Fandre broke the school record at Eagan High School in blocked shots and ranks second in points and fifth in career rebounds. Fandre also earned Offensive and Defensive Player of the Year honors at Egan and was selected to the All-Conference team

St. Paul was a four-year starter at New Rochelle High School, where she was the captain for two years. St. Paul also was named to the All-Conference team.

“They’re doing great,” Micir said. “They’re having so much fun playing basketball. They’re three of the people that play it with the most joy, and they’re doing a great job celebrating each other. For any first-year, there’s a learning curve, but what I really appreciate with these three is there’s no paralysis by analysis. They just do it, right. We give them a coaching point, they do it. They try their best and look at us and say how was it? They’re always open to feedback, so really excited about the three of them and their positive attitude.”