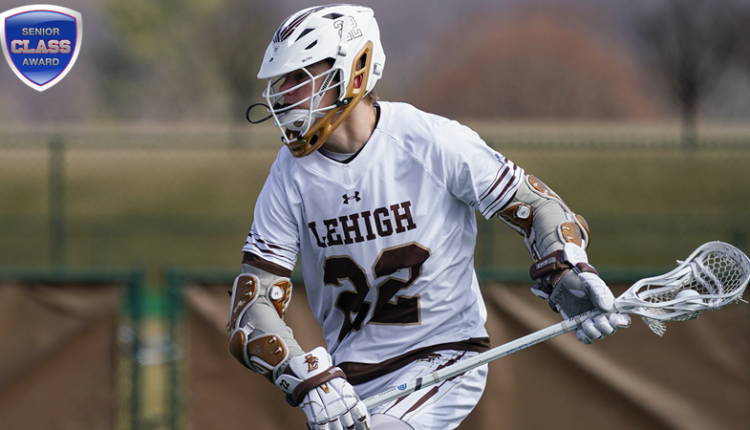 BETHLEHEM, Pa. – For the second straight season, Lehigh men’s lacrosse has a Senior CLASS Award finalist, with Tommy Schelling receiving the honor on Wednesday. Schelling is one of 10 seniors from around the nation named a finalist and one of just two in the Patriot League. He follows Teddy Leggett, who was named a finalist last season.

To be eligible for the award, student-athletes must be classified as NCAA Division I seniors or graduate students and have notable achievements in four areas of excellence: community, classroom, character and competition.

An acronym for Celebrating Loyalty and Achievement for Staying in School ® , the Senior CLASS Award focuses on the total student-athlete and encourages students to use their athletic platforms to make a positive impact as leaders in their communities.

The finalists were chosen by a selection committee from the list of 20 candidates announced earlier in the season. Nationwide fan voting begins immediately to help select the winner, and fans are encouraged to submit votes online at the Senior CLASS Award website through May 16. Fan votes will be combined with those of the media and Division I head coaches to determine the winner.

The Senior CLASS Award recipient will be announced during the 2022 NCAA Men’s Lacrosse National Championship ® in late May.

For more information on Schelling, please see below.

Schelling owns a stellar 3.51 cumulative grade point average as a Mechanical Engineering major and Business minor. In his career, Schelling has been named to the Patriot League Academic Honor Roll every year (for a spring semester GPA of 3.2+), been named to the Dean’s List multiple times and garnered the Faculty Athletics Council Award (for a semester GPA of 3.2 +). He also tallied a perfect 4.0 grade point average in the fall of 2020.

Schelling has extensive relevant work experience as an intern with stainless steel manufacturer Phoenix Tube Co. in each of the last two summers. He has been a member of the engineering team, dealing with group and individual projects. He accepted technical sales engineering internship position at Trane Technologies for this summer. Schelling plans on pursuing his master’s degree.

Schelling is a team captain for the 2022 Mountain Hawks. He’s also a member of the Lehigh men’s lacrosse program’s Academic Council, aimed to help all of the program’s student-athletes be at their best in the classroom.

From 2014 to 2018, Schelling assisted at Interfaith Food Pantry, which distributes supplemental and/or emergency food to qualifying Morris County residents by organizing and maintaining the pantry, and helping with the distribution of food.

Over his Lehigh career, Schelling and the Mountain Hawks have continually taken part in community service, especially early in his career (before the COVID-19 pandemic). Just a few days into some fall semesters, the men’s lacrosse program held an annual community service kickoff for the City of Bethlehem Parks and Recreation.

Lehigh has a strong connection to the HEADstrong Foundation, a 501(c)(3) non-profit organization committed to providing essential services to improve lives affected by cancer. It’s a cause that’s especially close to Tommy’s heart, as his mother is a breast cancer survivor. This past fall, the Mountain Hawks took part in HEADstrong’s Lax Stache Madness and raised nearly $13,000 (as of December) for the fight against cancer, with Lehigh fifth among Division I programs in money raised. In 2018, the Mountain Hawks shattered their goal, raising over $20,000 for HEADstrong.

Every holiday season, Schelling and the Mountain Hawks take part in Adopt-A-Family where they provide a holiday for a local underprivileged family. The process typically includes shopping for gifts, wrapping and delivering them in early December. The pandemic in 2020 changed how things looked, but Lehigh Athletics continued to raise funds and help local families in need, but in different ways (through things like gift cards and without the final in-person meeting).

Schelling garnered preseason All-League recognition after being named first team All-Patriot League in 2021. Last season, Schelling led the Mountain Hawks in assists (24) and points (48), finishing third in the league (19th nationally) in assists per game (2.18), fourth (21st nationally) in points per contest (4.36) and sixth (48th nationally) in goals per game (2.18). He also finished fourth on the team with 32 groundballs while recording seven multi-goal games, 10 multi-point games and three hat tricks. Twice named to the Tewaaraton Award Watch List, Schelling tallied five or more points in seven of the 10 regular season games. He was twice named Patriot League Offensive Player of the Week (following wins at Colgate and vs. Navy).

Schelling entered his senior season with 63 goals and 48 assists for 111 points, posting 30 points as a first year then 33 in just six games as a sophomore (which was cut short due to the COVID-19 pandemic). He finished that shortened 2020 campaign 12th nationally in points per game (5.50). He began that season with career highs for goals (7) and points (9) against Utah. As a senior in 2022, Schelling leads the Mountain Hawks in points (39) and goals (25), recording at least one point in all 10 games and multiple points in nine of them. He currently owns 73 career assists, good for seventh in program history.

Corman to stay in GOP governor primary, though election logistics meant his fate was sealed