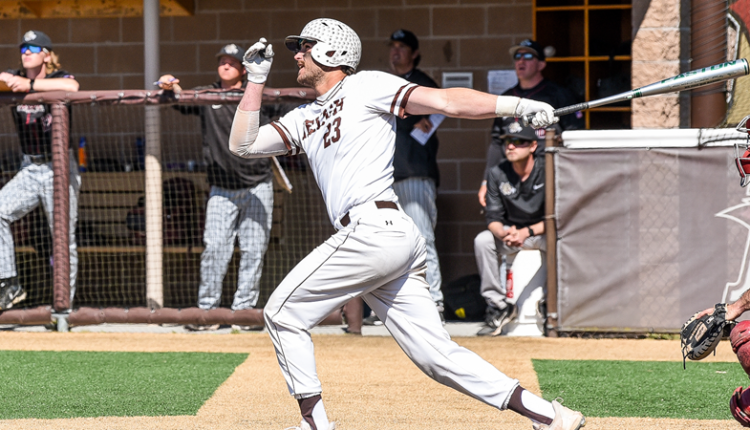 BETHLEHEM, Pa. – Senior outfielder/right-handed pitcher Casey Rother was named Patriot League Player of the Week for the second time this season after an impressive showing at the plate and on the mound during the Lehigh baseball team’s 3-1 week against Cairn and Holy Cross. The Mountain Hawks conclude their non-league portion of the regular season Wednesday when they visit Saint Peter’s in Jersey City at 3 pm, streamed live on the Peacocks Digital Network.

Rother drove in runs left and right for Lehigh in key league victories over Holy Cross over the weekend at J. David Walker Field, homering in three consecutive games. He batted .529 (9-for-17) with three home runs and 13 RBIs, while slugging 1,353 with an on-base percentage of .833. On Sunday, Rother had himself an all-time day, going 4-for-5 with three runs, two doubles, a home run and a career-high eight RBIs against the Crusaders, finishing just one shy of the single-game program record .

During Saturday’s doubleheader, Rother combined to go 4-for-8 with four runs, three runs driven in and two homers in the split. In addition, he tossed 3.1 scoreless innings of relief to earn his third victory of the 2022 season and decrease his ERA to a team-best 0.75 mark.

The Mountain Hawks are riding an impressive hot streak as of late, turning it on at the right time and looking to clinch a Patriot League Tournament berth this coming weekend for the second straight season. Lehigh has won six of its last eight games and is just a win shy of matching its 2021 win total (24). It split its doubleheader with Holy Cross on Saturday before the bats exploded for 17 runs on 17 hits in Sunday’s finale.

In addition to being one of the more prominent sluggers in the Patriot League this season, Rother is currently on a pair of hot streaks at the dish, getting a hit in 13 straight games and reaching base in 20 straight. Two other Mountain Hawks are also on lengthy reached base streaks themselves in sophomore Tyler Young (19) and first-year Jake Whitlinger (13). Sophomore Riley Davis’ reached base streak of 27 straight games came to an end two weekends ago at Bucknell.

It should be a battle over the final five games of the 2022 regular season for the title of Home Run King in both the Lehigh lineup and in the Patriot League between Retzbach and Rother. Retzbach leads the way with nine long balls, while Rother has eight, including five over his last seven games. As a team, Lehigh leads the Patriot League in total home runs (42) as well as 15 in league play.

Saint Peter’s has struggled as of late, dropping its last eight games. The Peacocks (6-34, 3-12 MAAC) have just one win at home this season, going 1-7 in such games while going 5-26 on the road. At the dish, Collin Jensen leads the team in batting average (.301), hits (43), runs scored (19) and total bases. Jensen, Chris Marquart and Sam Haney each have three home runs this year to lead the Saint Peter’s offense. Haney leads the team with 21 runs driven in.

Lehigh leads the all-time series between the two teams, 11-2 including a 19-6 victory earlier this season at Walker Field.