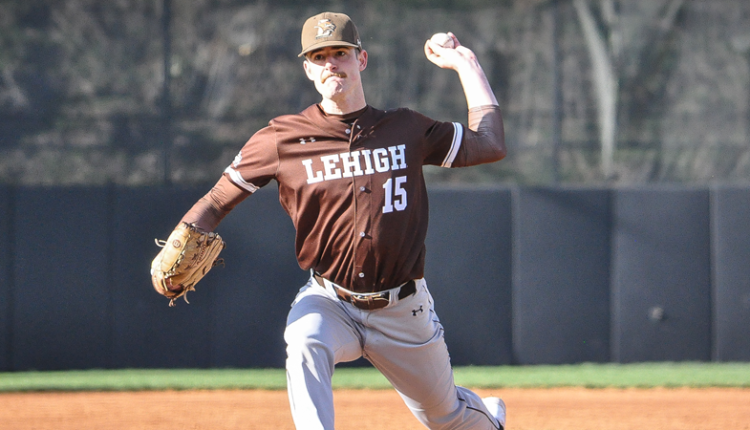 LEXINGTON, Va. – Senior left-hander Luke Rettig was outstanding once again in the first game of the series Friday against VMI, going the distance, throwing seven shutout frames with five strikeouts and the offense hit three home runs in an 8-0 victory over the Keydets at Gray-Minor Stadium. The Mountain Hawks (6-6) opened Game 2 with a 4-0 lead, but fell 11-7 to settle for the split.

Overall on the day, Lehigh mashed five homers and totaled 15 runs as a team on 20 hits. Five different players hit home runs including first career shots for both Riley Davis and Tyler Young.

“Tonight was an ace versus ace matchup between the two teams [in Game 1],” said head coach Sean Leary. “We need to be able to go out there and win those games. hatch [Rettig] has been phenomenal through four starts. He’s gone out and battled and dued with everybody’s ace. Today, he was just outstanding and beat a really good hitting ballclub. As you saw in Game 2, we made a mistake and they made us pay for it. That just shows how sharp Luke was in Game 1.

“Give our hitters a ton of credit, they put 15 runs up against some very good pitching. We just had a really fluky inning in there where they had a bloop hit there and a couple big hits, but that’s baseball. We’ve just got to clean that one inning up and we may have been able to have a chance to win both today.”

Davis got the scoring going in the top of the second inning with his two-run blast to right field following a leadoff double from Justin Butler. That put Lehigh up 2-0 to kick off the contest.

In the top of the third, Adam Retzbach laced a single to left field, scoring Jake Whitlinger to extend the lead to 3-0. Three more runs came across to score in the inning via back-to-back home runs from Butler, a two-run shot and a solo shot off the bat of Andrew Nole, which gave the Mountain Hawks a 6-0 advantage.

Nole Rother scored by way of an RBI single right field in the top of the fifth inning and a sacrifice fly from Riley Davis scored Retzbach in the inning, putting the finishing touches on an 8-0 final.

Rettig was efficient on the mound, as he has been all season long, striking out five with just two walks and three hits over seven shutout innings. He threw a season-high 95 pitches on the mound and earned his third victory of the season. Through four starts, Rettig is now 3-1 with a 0.43 ERA. He’s struck out 26 batters with 11 walks, allowing just a single earned run over 21 innings of work.

Four Mountain Hawks tallied a pair of hits in the victory, while Davis went 1-for-2 with a run scored and three RBIs to pace the team. Whitlinger finished with two stolen bases, upping his season total to five on five attempts.

“I think this is going to be a really great offensive ballclub,” said Leary. “We haven’t quite put it all together for a whole weekend yet, but what was fun today is that we started lengthening the lineup. To see Riley [Davis] get one out of the ballpark and have tyler [Young] get a home run in Game 2 and you see the guys in the middle where Adam [Retzbach] and Casey [Rother] were just terrible. I’m excited to see the first-years mature. [Jake] Whitlinger had some terrific at-bats today, Rafe [Perich] was on base and played great defense. As we get some of our pieces back in the short term here, I just think we’re going to be stronger in these first three weekends getting all these guys experience. Some of those guys are really starting to step up and contribute.”

Justin Starke, Will Knight and Reeves Whitmore combined for all three of VMI’s hits in the doubleheader.

Lehigh’s offensive strengths carried over right into the start of the second game, which began around 5:35 pm Friday night. Retzbach homered down the left field line, a two-run homer to give the Mountain Hawks an early 2-0 lead. Davis led off the second with a double to center field and Young drove him in with a home run to left, making it a 4-0 ballgame.

Senior lefty Matt Stamford made the start for Lehigh and gave up his first runs of the game on a home run down the left field line after VMI drew a one-out walk. The two-run homer cut the Lehigh lead in half at 4-2.

The Keydets scored seven runs in the fourth inning, coming off both Stamford and right-hander Tyler Thompson and was capped off by a grand slam, which put VMI in front 9-4. A two-run blast in the fifth extended the lead to 11-4.

Lehigh got two runs back in the sixth inning via Young SAC-fly to center field which Davis scored and an RBI single from Whitlinger, cutting the deficit to 11-6.

The Mountain Hawks got one more to cross the plate in the seventh, as Retzbach advanced to third base on a passed ball, Rother scoring, but VMI held on for the 11-7 victory. Lehigh was able to get two runners on base in the ninth following a single from Retzbach and a one-out walk drawn by Nole, but a strikeout and fly-out ended the inning, the threat and the game.

Rother, Retzbach and Davis each registered two-hit games for Lehigh, while Young finished with three RBIs.

Stamford was charged with the loss, going three innings and allowing six earned runs on six hits with two strikeouts and a walk. Tyler Thompson went two, allowing five runs on four hits, while Ryan Deom and Jack Hamilton combined for three shutout innings on two hits with a pair of punchouts.

Due to expected inclement weather in the Lexington area on Saturday, the Mountain Hawks have an off day before closing out the series Sunday at 1 pm against VMI. That game will be streamed live on ESPN+ (subscription required).

Good Start For the Mountain Hawks at SHU Spring Invitational