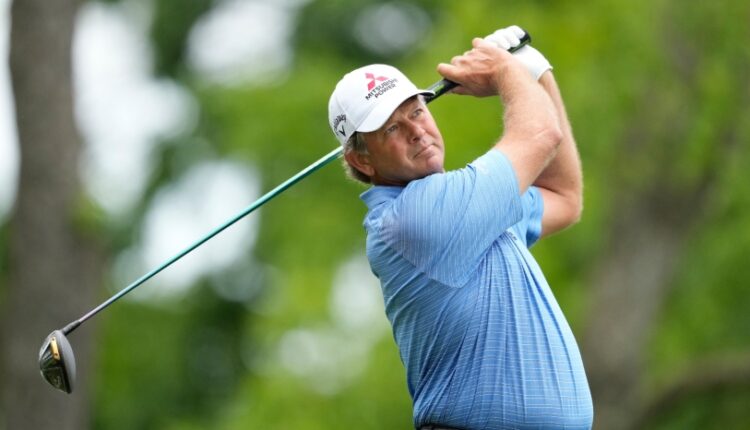 Retief Goosen’s eternal even keel effective at US Senior Open

BETHLEHEM, Penn. – Rain had been reduced to a steady drizzle by late morning Thursday. It was a break, perhaps, from the more furious bursts of rain a short time earlier, but still, conditions at Saucon Valley Country Club were a stern test in the 42nd US Senior Open.

For players, yes, but even more so for standard-bearer Jackie Denzell, who diligently attended to the various shades of colored numbers – red, green, black – and flawlessly kept an accurate tally as she trudged around five miles for more than four- and-a-half hours on a stage of wet grass.

Maintaining control as she moved down the 16th fairway, Denzell was asked if this Retief Goosen gentleman was acting excitable and being demonstrative. She stared. “No,” she said. “He hasn’t said a word. He’s very quiet.”

No worries, she was told. Just checking to make sure the golf world was still on its axis.

In this era of instant awareness, Goosen was asked if he wore a WHOOP to measure important data like heart rate. He smiled and said no. But he rejected popular folklore that ice runs through his veins, that his heart rate is forever in balance and nothing fazes him.

“No, I get excited,” said Goosen, 53. “In my room when I get back. I’ve bashed my head against the wall, probably throw a chair around. We all get upset. Do not worry.”

We’ll counter that that’s his story and he’s sticking to it but when one’s legacy is built around two US Opens – heart-stopping efforts at Southern Hills in 2001 and Shinnecock Hills in 2004 – it is easier to subscribe to the notion that Goosen can shift into a more calming gear than most pro golfers.

“You try and stay focused in this game, play shot for shot, especially on a golf course like this,” said Goosen. “You know you have to grind on every shot.”

Few golfers in his generation played the game at the highest level with a more level demeanor than did Goosen. Now that he’s plying his trade at the PGA TOUR Champions level, it is with a sense of relief to report that very little has changed, that he remains unflustered, be it good or bad.

His level par 71 in a tough morning wave? “I would have pretty much taken it (before starting his round),” he said. “But unfortunately, the sun is going to shine and (my good play) will all be forgotten.”

At that very moment, Goosen heard a roar from the 15th green not 75 yards away. Rob Labritz had holed out for eagle.

Goosen shook his head, smiled and told a reporter, “See, you can throw away your notes.”

In his two prior US Senior Open appearances, Goosen was T14 in 2019 and T2 a year ago in Omaha, Nebraska, when Jim Furyk was three strokes better. They are the tough-course tests, “when the rough is like hitting out of an ice plant,” that bring out the best in him, Goosen agreed.

But the affable South African just as readily offered that at this age one never knows for how much longer he’ll compete. “I’m not going to play till I’m flippin’ 70,” he laughed.

It wasn’t so much a concession that the roller-coaster world of professional golf is too much – although Goosen conceded that “I’ve played some really bad golf lately.” It was more a reflection of other interests, like his winery in South Africa. There are other golfers who are associated with their own wine labels, but Goosen actually owns a wine farm in the Outeniqua Mountains in South Africa, “near where we had the Presidents Cup (in 2003),” he said, adding that he also has a cattle farm.

“Nothing like a good steak and a good wine,” Goosen smiled, perhaps in an effort to take his mind off a morning that had been a tough slog through very wet conditions. Only one sub-par round had been recorded in the morning wave – Paul Goydos’ 2-under 69 – and Goosen readily expected the afternoon players to post a flurry of red numbers.

Call it rub of the green and Goosen did not disagree. The good news is, he received a fortunate break at the par-4 18th when his third shot out of thick rough left of the green took one hop and hit the flagstick solidly. Instead of racing 10 to 15 feet by, Goosen tapped in for par.

“There was just no way to stop it,” said Goosen, a concession that he easily could have finished with a bogey and a 72.

During practice rounds in warm and dry conditions, Goosen had hit driver, 8-iron onto the green at the 469-yard, par-4 second. “But today I hit driver, rescue,” he said, explaining why it was one of his three bogeys.

Again, it was evidence of the tougher draw, but this is “The Goose,” to whom all golf moments are met with an unflappability. Save, of course, for that wild celebration he once orchestrated at Lake Nona in 2004. Having prevailed at the TOUR Championship, one of his seven PGA TOUR victories, Goosen later that night drove his car to good friend Ernie Els’ home at Lake Nona and made a lot of noise in an effort to get his friend to come out and play.

Wild and crazy, that Goose fellow, but it’s not because of that TOUR Championship win that Denzell’s father wanted his daughter to get an autograph. It’s because of those stirring US Open triumphs 21 and 18 years ago.

Jackie Denzell, faithful to her standard-bearing duties, would add the autograph to her “to-do” list. But, no, she wasn’t aware of this Goosen fellow having won two US Opens.

She could confirm, however, that he was quiet and in possession of a wonderful demeanor.

Seniors With Prediabetes Should Eat Better, Get Moving, but Not Fret Too Much About Diabetes