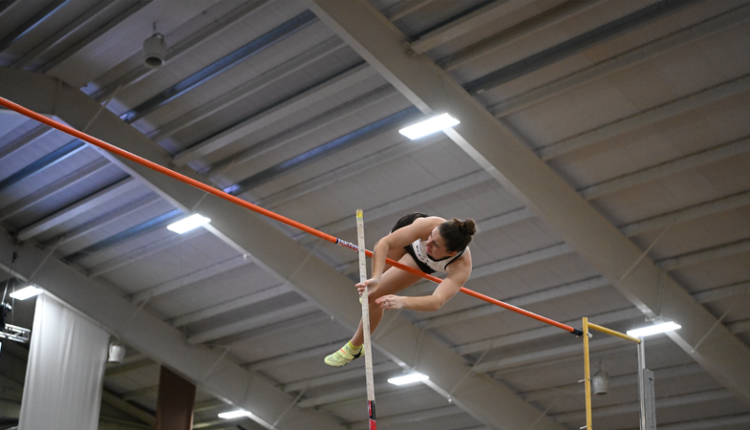 BETHLEHEM, Pa. – The Lehigh women’s track and field team opened up the indoor season in a dominating fashion, winning 13 of the 14 events while also breaking a school record at the two-day Fast Times Before Finals at Rauch Fieldhouse. First-year Laura Reigle put her name in the record book in her first meet as a Mountain Hawk, breaking a four-year school record in her first-place finish in the pole vault with a mark of 3.96m.

“I think it’s really good for the morale of the team to feel like they’re in a position to compete just from an emotional standpoint, outside of what the numbers say, it’s about ‘Hey we can come in and host a meet and dominate and then take that momentum through the winter and into the full competitive season,’ so I’m really excited about that,” Atte continued.

Talamini-Kelemen went on to win an event of her own on Saturday afternoon in Bethlehem. The sophomore wrapped up the two-day meet with a first-place finish in the triple jump with a mark of 11.78m. The Mountain Hawks swept the event with junior Nina Cialone (11.43m) finishing second and senior Rachel Sequeira (11.14m) finishing third. First-year Grace Nation earned a fourth-place finish in her collegiate debut, finishing with a mark of 11.03m.

Dejana finished third in the pentathlon with a score of 2710. She finished first in the 60m with a time of 9.43 and second in the high jump with a mark of 1.49m during the five event competition.

Lehigh continued to dominate in the field, winning five of the six events during the two-day meet. In the throws, first-year Jennifer Whipple made her Lehigh debut, picking up a win in her first meet as a Mountain Hawk. Whipple won the weight throw with a mark of 13.56m. Sophomore Karina Roze followed suit, finishing fourth overall with a mark of 12.97m.

“Jennifer and Grace have so much potential and I’m very excited because they’re young and very coachable,” Atte said. “They’ve made a lot of great progress just in their training and their technical work. Coach Allison Taub has done an amazing job with having them understand why they’re doing what they’re doing and feel a part of the group and not feel like they’re a drain on the group because they’re so young and having to step into a Teasha McKoy or Veronica (Meyer) shoes.

In the high jump, senior Calista Marzolino (1.60m) and junior Kerry Perna (1.55m) picked up right where they left off last season, finishing second and third, respectively. Sophomore Izabel Fronc and first-year Melania LaCorte tied for fourth with a mark of 1.55m.

On the track, Lehigh showed his strength in the sprints, having three student-athletes secure first place finishes.

“In having conversations with the female sprinters, quite a few of them have talked about ‘Where am I going to end up on this top ten list because I am going to get on there,'” said Atte. “A few of them have expressed, ‘I am going to break this school record.’ We have started goal setting and adjusting our training plan for that. I’m letting the student-athletes push and I’m going to run as fast as they want to run, just going to keep cadence so that’s exciting.”

The Mountain Hawks opened up the sprints by dominating the 400m on Saturday afternoon, placing six runners in the top ten. Junior Ashley Struck won the race with a time of 58.42. First-years Grace Kennedy (59.30) and Abby Kleber (59.45) both made their collegiate debuts, placing second and third, respectively. Lehigh senior Lauren Powell finished fifth with a time of 1:01.29 with first-year Amber Barrios (1:01.68) finishing sixth and junior Simone Davey (1:02.56) finishing seventh.

Following their dominating performance in the 400m, the Mountain Hawks went on to grab two more first-place finishes in the 60m and 200m. In the 200m, junior Ashley Struck earned a first-place finish with her time of 25.80. Kennedy followed suit, finishing third overall with a time of 26.36. Lehigh had four more runners finish in the top ten following Struck and Kennedy.

First-year Gianna Mangili secured a first-place finish in her first meet as a Mountain Hawk. Mangili won the 60m with a time of 7.84 to give Lehigh its third win of the day in the sprints events.

Lehigh continued to put up impressive times on the track as graduate student Chae Kim won the 60m hurdles with a time of 9.12. Senior Ashley Griesmeyer followed suit, finishing second overall with a time of 9.24.

Elena Perez-Segnini picked up her first win of the season in the 800m. The senior finished first with a time of 2:18.56. Sophomore Riley Morrell followed close behind, finishing second in 2:24.63.

Lehigh’s relay teams closed out the two-day meet on Saturday evening with two more first-place finishes for the Mountain Hawks. Senior Andrea Miller, juniors Abigail Tenreiro and Linsday MacLellan and first-year Abigail Kleber made up the 4×800 relay that won the event with a time of 9:40.71.

The 4×400 relay team wrapped up the meet with the final race of the day on Saturday. Senior Anna Murphy ran alongside Morrell and juniors Jordan Hock and Ashley Struck to pick up Lehigh’s 12th win of the day. The relay team finished the race in 9:40.71.

Lehigh will take a month-long break before returning to action on Jan. 14. The Mountain Hawks will host Monmouth and Sacred Heart in their annual Angry Birds Invitational at Rauch Fieldhouse following winter break.