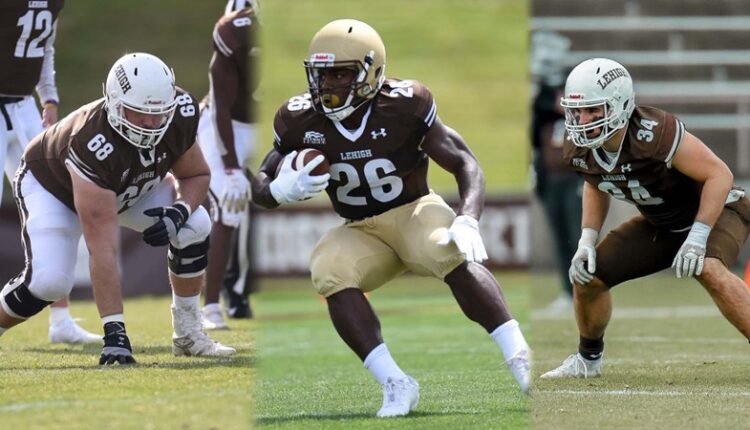 BETHLEHEM, Pa. – Six members of the Lehigh football program have been named to the National Football Foundation’s Hampshire Honor Society for their contributions on the field and in the classroom. The Mountain Hawks’ 2022 honorees are running back RaShawn Allen, wide receiver Austin Dambach, offensive linemen Jack Fris and Justin Gurth, linebacker Pete Haffner and quarterback Cross Wilkinson.

Qualifications for membership in the NFF Hampshire Honor Society include: being a starter or significant contributor in one’s last year of eligibility at an accredited NCAA Football Bowl Subdivision, Football Championship Subdivision, Division II, Division III or an NAIA college or university, achieving a 3.2 cumulative grade point average throughout the entire course of undergraduate study, and meeting all NCAA-mandated progress towards degree requirements.

All six were named to the Patriot League Academic Honor Roll following the 2021 season. Allen, Dambach and Haffner have all garnered academic distinctions in their careers, either from the National Football Foundation or CoSIDA. All three of Lehigh’s senior captains from the 2021 season, Allen, Gurth and Haffner, were recognized.

Allen carried a 3.76 in electrical engineering and was Lehigh’s nominee for the William V. Campbell Trophy, given to college football’s top Scholar-Athlete. He also started all 11 games at running back last season.

Dambach owns a 3.95 GPA majoring in finance and also made his second consecutive appearance on the FCS ADA Academic All-Star team.

Fris maintains a 3.35 in industrial and systems engineering, while Gurth is a finance major with a 3.60 GPA. They were the veteran leaders of the offensive line, with Fris starting all 11 games at left tackle and Gurth coming back from a preseason injury to start seven games at right guard.

Haffner graduated last spring with a 3.68 in finance and is pursuing graduate work in accounting. He earned his third straight second team All-Patriot League honor in November as one of the top performers on the Lehigh defense.

Wilkinson carries a 3.81 GPA as a management major and started all three games in the spring of 2021 and the first three games of the fall season before suffering an injury.

A group of 1,559 players from 313 schools qualified for Hampshire Honor Society membership in 2022, the Society’s 16th year. The initiative has now honored 14,636 student-athletes since its inception.

This marks the ninth time in 10 seasons that Lehigh had at least one football student-athlete named to the Hampshire Honor Society.