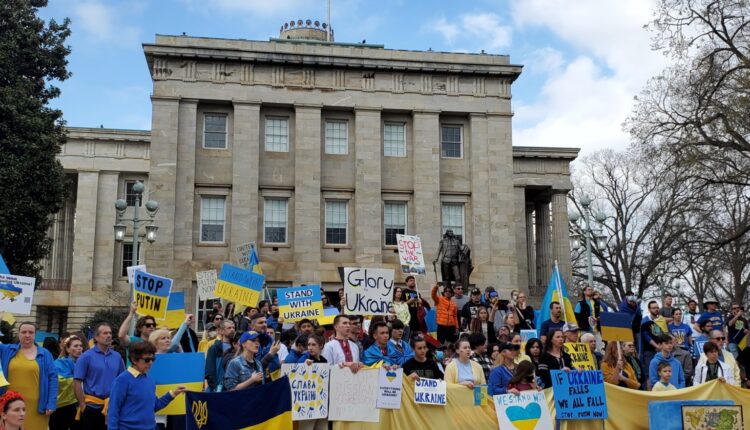 Putin’s war in Ukraine is a reminder: Maybe we’re not as divided as we think | Rob Schofield

It seems certain that one of the contributing factors in the disastrous calculus that led Russian dictator Vladimir Putin to believe he could get away with his murderous and criminal invasion of Ukraine was his perception of weakness and division in the United States.

It was not a completely unreasonable perception to hold.

Like others around the world, Putin was watching carefully on Jan. 6, 2021, as American democracy appeared to teeter for a moment on the apex of the Washington Monument. He’s seen how the COVID-19 pandemic helped deepen the fractures in our already divided nation.

He was fully aware of the way the U.S. has disengaged in recent years from its traditional post-World War II European friendships. And you can bet your bottom dollar that he’s also been aware of the way a certain former U.S. president and some of his noisiest sycophants have consistently voiced admiration for his ruthless tactics, while doing everything within their power to undermine the current inhabitant of the White House.

In Putin’s deeply twisted mind, it probably seemed like the optimal time to do the thing he’s always done – violently bully other humans he perceives as weaker in order to accumulate more power.

A funny thing has happened, however, in the days since Putin launched his brutal and unprovoked blitzkrieg. Contrary to what had seemed to be the case, the Kremlin despot’s principal adversaries have shown themselves to be not that divided or dysfunctional.

First off, it turns out that 14 months of sober and coherent national leadership in Washington have helped change the U.S. national landscape in some important ways.

U.S. unemployment has plummeted. Wages and incomes are up. Poverty is down. The pandemic has been greatly tamed. The climate emergency is once more an important national priority. And thanks to the current president’s timely and utterly essential action, the nation’s European alliances have been rebuilt just in time.

Meanwhile, as he marshaled his troops and launched his brutal invasion, Putin found the Biden administration was skillfully exposing his every move to the light of day and almost universal international derision and condemnation.

But perhaps even more important, the last few weeks have brought to the fore something Putin probably hadn’t counted on: The American people are not as divided as it might have seemed.

Yes, we’ve got some enormous challenges to overcome. America’s ideological, political, racial and geographic divides are as formidable these days as they’ve been in decades.

Progressives detest the American right’s enabling of massive economic inequality, its denial of science and refusal to respond to the environmental crisis, its willingness to spur and capitalize on white fears, its backward-looking social agenda, and its tolerance of Trump.

Conservatives hate the rapid social change that’s overtaken the country in recent decades, the “political correctness” they see on the left, the environmental and pandemic regulations that they’re convinced are merely designed to control their lives, and the lost primacy of traditional Christianity.

But doggone it, it’s also been made clear in recent weeks that the overwhelming majority of Americans have absolutely no taste for genuine tyranny.

Donald Trump and a few genuine extremists may harbor, or even express, a deeply troubling admiration for Putin’s murderous machismo, but most Americans – right and left – passionately hate what Putin stands for. We look around and see what we have and the life we enjoy or aspire to (and that which is being brutally stolen from the courageous people of Ukraine, and put at risk in other Eastern European countries) and agree that, for all its flaws, the U.S. has always stood, and should always stand, for something different and better.

As North Carolina Sen. Thom Tillis has repeatedly and rightfully observed, Putin is a force of great evil in the world. This is from a March 2 report in Raleigh’s News & Observer:

Anybody who compliments Vladimir Putin, is complimenting a mass murderer,” Tillis said during a news conference. “There are no compliments coming from me or my office.

In other words, first things first.

Americans have many, many monumental challenges to tackle and difficult debates in which they must engage going forward, but it’s also clear that we are broadly and strongly united in our opposition to Putinism.

Much as was the case prior to World War II, many have been slow to this recognition and inexcusably blind to other crises around the world in which other peoples have been the victims of similarly horrific wars of aggression.

Now, however, that circumstances have awakened us, it seems there is at least a better-late-than-never chance for us to recognize that we have a lot more in common – with each other and all others who oppose despotism – than we had previously imagined.

The world looks on anxiously to see if our national light bulb clicks on.

Rob Schofield is the director of North Carolina Policy Watch, a sibling site of the , where this column first appeared.

The GOP is the gallows party