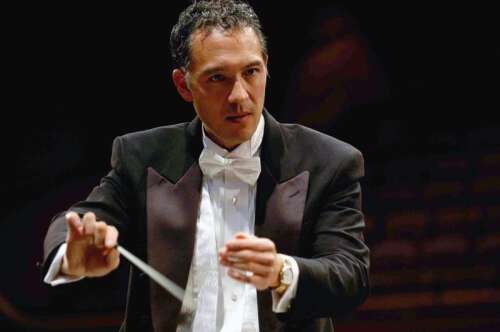 It will literally be a passing of the baton.

The occasion for the passing of the baton is the Sinfonia concert, “Dance and Romance,” 7:30 p.m. April 2, First Presbyterian Church, 3231 W. Tilghman St., Allentown.

“We’ll share the podium,” says Chou. “I will conduct the Dvorak Czech Suite. Alan [Birney] will conduct the two other works on the program, the Rossini Overture and the Schumann ‘Piano Concerto.’”

At the concert, there will be dedications, commendations and proclamations forbirney, who is also stepping down from the podium as Music Director of Pennsylvania Camerata Singers, which he also founded.

“I love doing it, but I feel it should be somebody else’s turn at this time,” saysbirney of his role at the Sinfonia and Camerata.

“And I think both people [Chou and Trovato] “I helped choose are going to bring the organization up better than I could,”birney says in a phone interview.

birney and trovato shared conducting and accompanist roles for the camerata 2021-22 season.

“Hey [Trovato] and I have worked together for the past season, including the March 26 concert. He’s been our accompanist. He’s a fine pianist and very good for a choir, saysbirney.

“Hey [Trovato] a singer. I’m not a singer. He can give them all the things they need to know from a singer’s view. Everyone likes him, including me.”

birney founded the Valley Camerata and Camerata Orchestra in 1972. Pennsylvania Sinfonia Orchestra, celebrating its 40th anniversary, was founded in 1982.

“I felt it was important to recognize Allan and his steadfast dedication and in his founding of the organization and to the music in the Lehigh Valley and to the musicians, many of whom have been there from the beginning,” Chou says in a phone interview .

“Allan’s legacy is that through thick and thin he kept the orchestra going. He employed the musicians. The Lehigh Valley has been fortunate that he has been such a fixture,” Chou says.

“Allan has thoroughly devoted himself for the past four decades to fostering the quality and reputation of the Pennsylvania Sinfonia Orchestra,” says Bachman.

Chou has concertized throughout North America and abroad, having performed as a conductor, chamber musician and soloist in North and South America Asia, Europe and Africa. His virtuosity has been described as “stunning, combining electric energy and tenderness.”

“From the day I met him [Birney], until day the present day, he’s a genuine person. What you see is what you get. He’s honest. He’s trustworthy. He made the orchestra what it is today,” Crook says in a phone interview.

“I believe that Allan has left the orchestra in a very good position for our transition into the next era.”

Crook is pleased with the appointment of Chou.

“Paul [Chou] is the right person for us at this point in our orchestra’s life.

“I’m very happy with the direction that the orchestra’s going in,” Crook says.

The Sinfonia board contacted Chou in December 2021.

After being offered the appointment, Chou says, “I thought about it. I have a busy day job and busy schedule of my own performances.”

Chou is a Senior Partner and Co-Managing Director, Korn Ferry, a human capital management company, consulting and executive search firm for a variety of industries.

“This is quite special,” says Chou of his Sinfonia appointment. ”I’ve performed with the PSO since probably the 1980s. It’s a great group of talented people.”

Since 2018, Chou is a guest artist, Festival Internacional de Música de Câmara PPGM-UFPB, Paraíba, Brazil, where he conducts the Festival Orchestra and performs as a soloist and chamber musician.

“The past two years have not been very vibrant,” says Chou. “I was traveling five, six days a week before the pandemic.”

Chou teaches, lectures and presents workshops around the United States.

During the pandemic, Chou did master classes via Zoom. “That’s pretty tough,” Chou says. “By the time you say, ‘Stop,’ there’s the delay already. What can you do?”

The Sinfonia 2022-23 season is the first that Chou will program. The 40th season is expected to be announced soon. The Sinfonia performs nine concerts per season.

“We have a very exciting season coming up. Once in awhile, I will play. I will be playing a solo with the orchestra in the fall. I will be doing it [conducting] with the violin under my chin.”

“I appreciate the opportunity to lead the organization,” Chou says of the Sinfonia. Concerning his plans, he says, “There are some broad themes.

“In any organization, you don’t want to ignore the legacy, the history and the foundation. At the same time, you’ve got to think about the future and the relevance of what we do. That’s a major theme.

“One of the [Sinfonia] musicians asked me, ‘What’s your thinking?’ over a Zoom call. Chou says he replied, “We need to be relevant.

Chou is a board member of Astral Artists, a Philadelphia based non-profit dedicated to advancing the careers of young musicians.

“We’re going to offer concerts that feature different types of works, just to provide some variety. We’re going to be doing some works that the orchestra has never played. And in subsequent seasons, we’ll do some adventuresome programming.

“There’s a lot of possibility to this orchestra and I’m eager to learn what new opportunities there are to showcase the musicians and contribute to the local region.”

Pre-concert lectures may be added as an educational component.

“Music is a common language. We can bring new audiences in. I’d like to be able to do something like that,” says Chou.

Chou attended Tanglewood Festival as a Leonard Bernstein Fellow. He is an alumnus of the Indiana University Jacobs School of Music and completed graduate studies at Stony Brook University. He resides on the Main Line, Philadelphia, with his wife, Dr. Karen Huang, and their son, Michael.

“Paul Chou has been all over the world,” saysbirney. “He understands all of the things that I’m not good at doing.

“Personally, I didn’t want to leave them [Sinfonia and Camerata] to try to figure out everything. My goal has been to get people who are really good, and then I’ll feel better,”birney says in a phone interview.

“We’ve gone through times when we thought, ‘How are we going to pay for the next concert?’ and we got through it. I’d like to see it keep going and I think these people will do so in a way that I couldn’t,”birney says.

“And I’d like to have more time to myself,” adds Birney, who received a 1991 City of Allentown Arts Ovation Award.

Birney, a native of Cedar Rapids, Iowa, is a graduate of Oberlin Conservatory, Yale School of Music and Juilliard School of Music, with additional studies in Kent, England, and Salzburg, Austria.

While a faculty member at Yale,birney organized the Morse Chamber Music Series and founded the Craftsbury Chamber Players, Craftsbury, Vt.

In 1970, Birney was appointed Professor of Music at Cedar Crest College, where he was on the faculty for 42 years.

Birney is a frequent piano, organ and harpsichord soloist.

“I would like to do some chamber music. Whether I’m up to it, we shall see. “I hope to get back at it more as a solo performer,”birney says.

“I’ve done this for a long time,” saysbirney. “I’m 83 now. I’m beginning to be a little frail. I don’t walk very well. I don’t talk very well, especially in public.

“My feet are very bad. I can’t stand for a long time. “I have to wear shoes that aren’t appropriate,”birney says.

Bachman, in an email, observes:

“By nature hey [Birney] has a humble, unassuming demeanor, but he persists determinedly and fiercely to keep Sinfonia performing at a high level, to the delight of loyal listeners.

“Allan has a keen ability to recognize exceptional talent in young artists. Over the years, many of the soloists that Sinfonia audiences have had the pleasure to hear early on, have gone on to have highly acclaimed careers as soloists of national and international stature.

“I am confident there are many exciting things in store for the Sinfonia and the concert-going public as Paul Chou takes on the role as Music Director of the Sinfonia. In his initial meetings with the board of directors, we have already witnessed his unquenchable energy and fount of ideas,” Bachman says.

A Conversation with Lauren Speranza about the NATO Summit