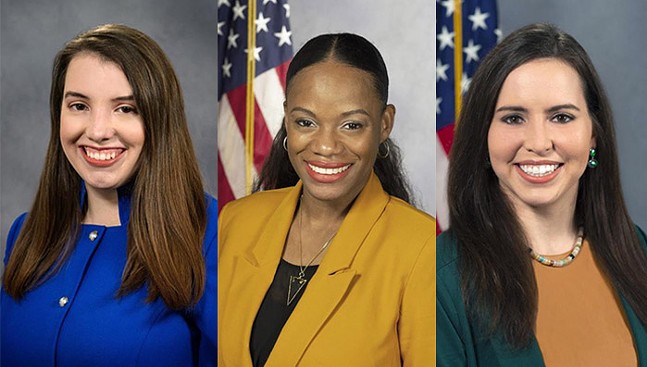 Progressive incumbent women were snubbed by Allegheny Co. Dem Committee. Does it matter?

When the Allegheny County Democratic Committee made its endorsements for the May 17 primary last month, it snubbed three progressive, incumbent women — all of whom have been here before.

The county party — whose endorsements are not binding but appear on a slate card sent to registered Democrats in the county — endorsed the primary opponents of Reps. Summer Lee, Jessica Benham, and Emily Kinkead.

For the most part, the incumbents seem to be taking the rejection in stride, raising the question of whether or not the ACDC’s stamp of approval is still relevant. The committee has faced criticism for its high filing fees, charging $8,000 for candidates to apply for an endorsement. All three women were passed over by the committee in previous races, and yet all three won their respective races.

“I’m not concerned — the votes of less than 60 people is not a reflective sampling of the 36th district,” Rep. Jessica Benham, D-Allegheny, said  when she was asked for her thoughts about the committee endorsing her primary opponent Stephanie Fox by a vote of 34-24. “Their candidate got roughly 15% of the vote in the primary in 2020. The primary is the Democratic endorsement that actually matters, and I look forward to speaking with more of my constituents and earning their votes as I seek re-election.”

Perhaps the most glaring of the county party’s 2022 primary brush-offs was Rep. Summer Lee, the first Black woman elected to the state legislature from southwestern Pennsylvania.

Lee is running to replace the retiring U.S. Rep. Mike Doyle in the redrawn 12th Congressional District race, and also defending her seat in the 34th District state house seat. She wasn’t endorsed by the county party in either race. But the committee also didn’t endorse the incumbent Lee in 2020, and she handily beat her primary opponent, much in the way she defeated incumbent Paul Costa in the primary in 2018.

Sanders said Lee would “stand up to big money interests and fight for an agenda that puts the working class first.” He added that Lee has been a “champion for Medicare for All, a $15 minimum wage, expanding voting rights, and a Green New Deal.”

And the same day the county party voted to endorse her opponent, Lee received the endorsement of the progressive 14th Ward Independent Democratic Club.

Kinkead, who beat incumbent Adam Ravenstahl in the 2020 primary for her state house seat, lost this year’s county party endorsement to Nick Mastros, a 65-year-old political newcomer who owns Allegheny Sandwich Shoppe on the North Side.

Asked about his policy positions, Mastros recently told WESA-FM that “I can’t right now, you know, right off the top of my head tell you what I’m for and what I’m against.”

Kinkead, whose 20th House District has been redrawn to include more suburban areas, scoffed on Twitter after the endorsements were announced.

“Hey, ACDC, the definition of insanity is doing the same thing over and over, expecting different results,” she tweeted. “Last time, I lost this vote 101-11. We won where it counted anyway. We’ll do it again. Who’s with me?”

For her part, Benham notes that organizations such as the county party aren’t helping attract much-needed younger voters to the polls, as Democrats across the country face an uphill battle in the 2022 midterms.

“As a party, we certainly need to do more to energize young voters, especially in a midterm year,” she said. “And one way we can do that is by not rejecting our younger elected officials.”

Kim Lyons covers Pittsburgh and western Pennsylvania for the Capital-Star. She wrote this piece for Pittsburgh City Paper, where it first appeared. Readers may follow her on Twitter @SocialKimLy.