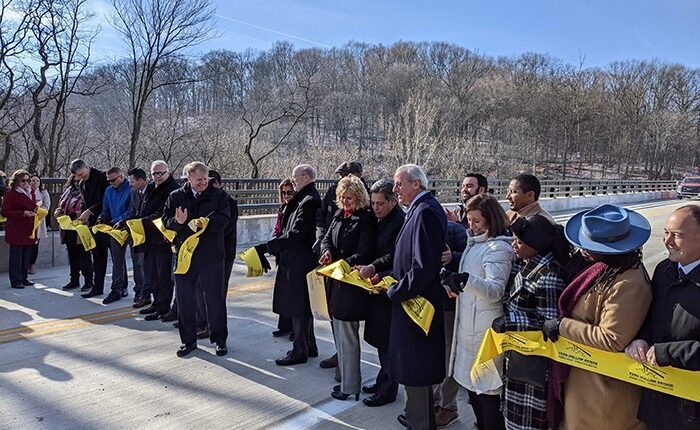 Pittsburgh’s Fern Hollow Bridge to reopen at the end of December, less than a year after collapse

PITTSBURGH —  At the intersection of South Braddock Avenue and Forbes Avenue, a crowd gathers on a sunny, bitterly cold Wednesday morning. Some observers stay at a distance, on one side, watching on higher ground from the nearby Regent Square playground, others from the backyard of the neighboring Waverly Presbyterian Church.

All are here to see the ribbon-cutting for the newly built Fern Hollow Bridge, a major connective piece of infrastructure that collapsed on Jan. 28. The bridge is expected to reopen to traffic by the end of December, according to a statement.

The Fern Hollow Bridge, which is owned and maintained by the city, carries Forbes Avenue over Frick Park, Fern Hollow Creek, and Tranquil Trail.

Several state, local, and federal leaders spoke at the Dec. 21 event, including Pennsylvania Gov. Tom Wolf, Allegheny County Executive Rich Fitzgerald, and Pittsburgh Mayor Ed Gainey. Each  expressed gratitude for the government officials, engineers, work crews, and others who made the relatively quick construction happen, as well as for the residents who gave their own input on the bridge’s design.

“Thank you to all of you whose work has helped turn this site of tragedy into one of hope,” Wolf said as he stood at a podium at the entrance of the bridge.

Katie Thomson, the director of Bipartisan Infrastructure Law Implementation for the United States Department of Transportation, also spoke, calling the completion of the bridge in less than 12 months “incredible.”

Speakers emphasized how the Bipartisan Infrastructure Law signed by President Joe Biden in November 2021 allowed $25.3 million in federal funds to be funneled into the project.

The collapse of the bridge, over which 14,000 cars passed daily, according to a previous statement from Wolf, disrupted the lives of many who depended on it as part of their daily commutes, and as a more direct route to Squirrel Hill, Oakland, and other neighborhoods.

State Sen. Jay Costa said rebuilding the bridge “will soon allow for the safe passage of over 21,000 cars and buses per day.”

Bill and Elizabeth James, who live just a couple blocks down from the bridge in Regent Square attended the ceremony, and recalled hearing the collapse, which occurred at around 6 a.m. Some nearby residents were even evacuated due to a ruptured gas line related to the disaster.

“It seemed unbelievable at first,” says Elizabeth, recalling how they came out in their pajamas and heard from a neighbor about what had happened.

“We were pretty overwhelmed in the beginning over how catastrophic it seemed to be,” says Bill. “We’re still feeling for those who were directly impacted by that.”

Five vehicles and a Port Authority bus were on the bridge when it collapsed. While no deaths occurred, later reports stated that 10 people, including some first responders, were treated for minor injuries.

The re-opening of the bridge has a more significant meaning for the James couple, who are expecting a child in March 2023.

“We have a fairly direct route to [UPMC Magee-Womens Hospital],” says Bill. “So that is, personally, a very exciting thing. We are really just appreciative of all the amazing workers, and seeing them work day-in and day-out in all kinds of conditions to make this a reality.”

Immediately after the collapse, Wolf and Gainey issued a Declaration of Disaster Emergency Proclamations, a legal agreement that would, according to a statement, allow PennDOT to manage the rebuilding process. The proclamations also let the Federal Highway Administration and PennDOT contract with Swank Construction Company and HDR Inc. to oversee the “removal of the collapsed structure,” and the bridge’s design and construction.

The collapse of the bridge also renewed calls for increased oversight of the city’s many bridges and other infrastructure. In response, on Feb. 1, Gainey and then-City Councilor Corey O’Connor introduced the Commission on Infrastructure Asset Reporting and Investment, created to determine how best ways to approach the “upkeep and improvement of major City-maintained infrastructure assets.”

In May, Gainey also announced the creation of a Bridge Asset Management Program and updates on the Swindell Bridge in Pittsburgh’s North Side.

Even as Pittsburgh leaders work to address the city’s most urgent infrastructure needs, Gainey believes the swift action on the Fern Hollow Bridge stands as a major accomplishment.

“This is not just a city of Pittsburgh celebration or victory,” Gainey said. “This is a state victory because we got it up quicker than ever before. Because we worked together, we were able to do it.”

He added, “You hear me say all the time, the power of this region, of the city of Pittsburgh and Allegheny County, is when something happens that’s tragic, we come together. We work hard, we change it. We make this city better. This is the most resilient city in the Commonwealth of Pennsylvania because of our people. And I am thankful for you, I appreciate you.”

Amanda Waltz is a reporter for Pittsburgh City Paper, where this story first appeared.