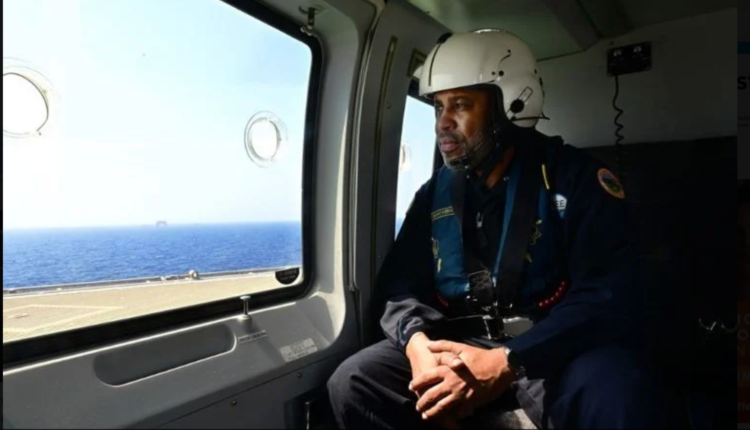 Philadelphia native Kevin M. Sligh Sr., 53, said he learned an important lesson about leadership as a company commander in the U.S. Coast Guard in Cape May, N.J.

“That was like a leadership boot camp,” Sligh said. “You truly understand how to take 100 individuals that come from all over America and transform them within 53 days into folks who live, sleep and breathe the Coast Guard and really take care of themselves and one another.”

Today, Sligh leads 850 federal workers as director of the Bureau of Safety and Environmental Enforcement (BSEE) an agency of the Department of Interior in Washington, D.C. He was appointed March 28 by the Biden administration.

The bureau oversees the regulation of energy-related businesses, such as oil and natural gas, and soon wind turbines and is also responsible for promoting safety, protecting the environment and conservation on the U.S. Outer Continental Shelf. It has offices in Louisiana, Texas, California and Alaska.

Since joining the U.S. Navy right of a high school at 17 years old, and later enlisting in the U.S. Coast Guard, Sligh’s career has been a whirlwind. On the way, he developed extensive experience in crisis management that eventually led him to Officer Candidate School, regional director of FEMA. And the White House, where Sligh did a stint on the National Security Council as director of response policy in 2017, during the hurricane season when hurricanes Irma and Maria hit.

The son of a nurse, Sligh said they lived in North Philadelphia, but eventually moved to Southwest Philadelphia and then New Jersey.

“It probably allowed me to see beyond Philadelphia as an option,” Sligh said. “I realized at a very young age that anything is possible, as long as you want to be better.”

Sligh credits good parenting for his success and good mentoring.

One such mentor is Jason Merriweather, a retired captain in the U.S. Coast Guard, has known Sligh for about 20 years.

“I first met Sligh professionally in the Coast Guard, he was stationed in Philadelphia and I was his assignment officer. I looked at his record and said this guy is doing some great things.”

Since then, they developed a friendship and mutual respect, often cheering each other on.

“One of the things that impressed me was his drive and coordination skills even as a young lieutenant in Philly and his understanding of the big picture and what really mattered,” said Merriweather, deputy director of the National Oceanic and Atmospheric Administration Corps Commissioned Personnel Center, in Silver Spring, Md.

“He competed for and we subsequently assigned him to operational officer on the Pacific strike team in California,” Merriweather said. “I kept track of him as mentee, working from Guam, the Pacific Rim and Alaska. All that fell into his purview. From there he went from former company commander at Cape May to a guy that people started look for to be on their team.”

It would be one of many crises that Sligh would play a major role in as an emergency manager, including Hurricanes Katrina, Harvey, Irma and Maria.

But it started in Philadelphia in 2004, when he was still in the Coast Guard, when a fairly large ship was turning around and struck a piece of metal debris and leaked thousands of gallons of home heating oil in the Delaware River.

“We shut the port down within a 10-mile radius,” Sligh said. “I worked with federal and state and local counterparts.”

The following year, Sligh made several tours to deal with Hurricane Katrina in Louisiana.

The Coast Guard provided a C-130 transport plane and asked me to fly a team of folks to Louisiana, to Alexandria, Baton Rouge and ultimately to New Orleans.

“We were helping out the EPA with household hazardous waste, from all the storm related flooding,” Sligh said. “You have to follow and set up contractors to remove it.”

According to Sligh, he branded himself as an emergency manager in the Coast Guard.

“I have a specific skill set,” Sligh said. “In crisis I don’t run from it, I run towards it. And I’m like the person who provides calm in chaotic times.”

During his 20 years at the Coast Guard, he even did a stint tasked with making sure Ebola didn’t make it to U.S. shores.

As for his management style, Sligh said the workforce is the most important part of any operation. And he said he believes in transparency and diversity, equity and inclusion.

“He is about the business and an overall good person,” Merriweather said. “Honestly his potential in that job that he is in right now — that director position, that was a good elevation. It’s up to him to determine how much higher he can go.”