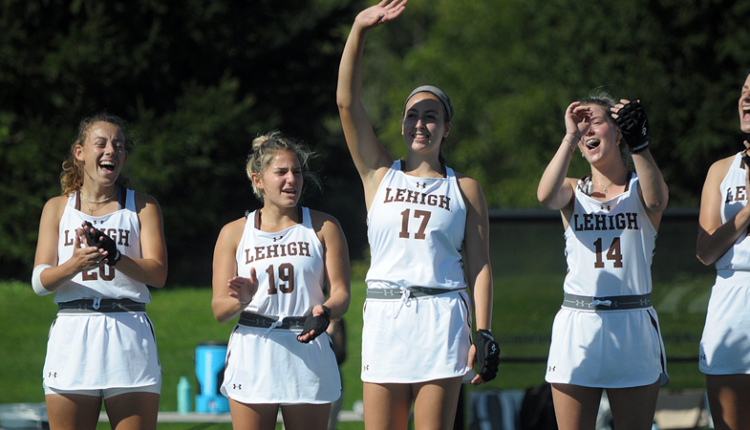 BETHLEHEM, Pa. – Drew Pecora certainly made her mark on not only the Lehigh field hockey program, but also all those she came in contact with. That impact was recognized on Tuesday as the Patriot League awarded Pecora its annual Outstanding Leadership and Character Award. The award is all encompassing, with the winner coming from across all institutions and sports.

Pecora is Lehigh’s fourth all-time female winner of the award and seventh overall. The first three years of the award’s existence saw Mountain Hawks win the female award – Jana Basubas of soccer (2011-12), Becky Guman of basketball (2012-13) and Brooke Astor of track and field (2013-14).

Pecora’s impact on Lehigh field hockey is impossible to quantify.

“Drew is a relational leader; she leads by developing strong relationships off the field so she can have hard conversations when she needs to,” said Lehigh head coach Caitlin Dallmeyer. “She is approachable, compassionate and always maintained a good perspective when things got tough.”

Pecora suffered a season-ending injury as a sophomore, which forced her to lead differently.

“She had to find ways to insert herself into places that weren’t natural for her without a stick in her hand,” said Dallmeyer. “That injury year allowed her to grow tremendously in her voice, as she realized her value far exceeded her playing ability.”

When Pecora returned to the field, she continued to make her mark as not only a leader, but also as an elite player. What a season she had. During her return to the field in 2019, she scored a program single-season record 14 goals and added three assists for 31 points – good for second in program history.

“Drew grew more confident in herself,” said Dallmeyer. “Everyone looked to her when times were hard or bodies were tired. She just had a magnetic field that sucked people in and she used it wisely to keep the team focused and motivated.”

Pecora’s senior season was the shortened COVID season in the spring of 2021. The Mountain Hawks played five games and she didn’t score any goals.

But that didn’t take away from the impact Pecora continued to make behind-the-scenes.

“After setting the record for goals in a season, she received no accolades,” said Dallmeyer. “Not once did you notice that it bothered her; our team was still successful and she was proud to be a part of it. I was quoted as saying that year that ‘every time you see someone score a goal, there is an unrecorded assist from Drew Pecora’ and that was because she spent so much time teaching, leading and getting extra reps in with the other forwards. She was leading the pack and just not finishing the goals to get the glory, but did not care one bit.”

Pecora cared most about team success, in not only wins and losses, but most importantly, in developing a strong culture that breeds success in all aspects of life.

The program’s transformation was happening, due in large part to Pecora. In the final game of 2019, her record-breaking 14th goal came in the regular season finale vs. defending Patriot League Champion Boston University. In the shortened spring, 2021 season, the Mountain Hawks defeated both Bucknell and Lafayette in the same season for the first time since 2004.

Pecora felt she had more to give to the program, so she came back for a fifth year in 2021. She went on to be an All-League and All-Region player, but the impact of her presence (along with fellow fifth-year Lenke Havas) went far beyond any goals and assists. It should be no surprise the Mountain Hawks finished the season 11-7 (4-2 in league play), good for their first winning record since 1994 while advancing to their Patriot League Tournament since 2011.

As a teammate said, “Drew is an incredible leader because she holds others accountable but gives positive feedback and helpful criticism to push the competitive spirit of LUFH, and she brought her best each day. She had a demanding presence on the field and helped create the strong culture of accountability, work ethics and friendship on this team.”

“I cannot recall any instance when Drew failed to meet team standards, and I have never had any reason to believe that the behavior we observe from Drew differs from the behavior she displays when the coaches are not present,” said Dallmeyer. “She holds herself and her teammates to the highest standard of integrity.”

Pecora has left Lehigh field hockey with a strong foundation, as her impact will be felt for years to come.

In Some States, Voters Will Get to Decide the Future of Abortion Rights