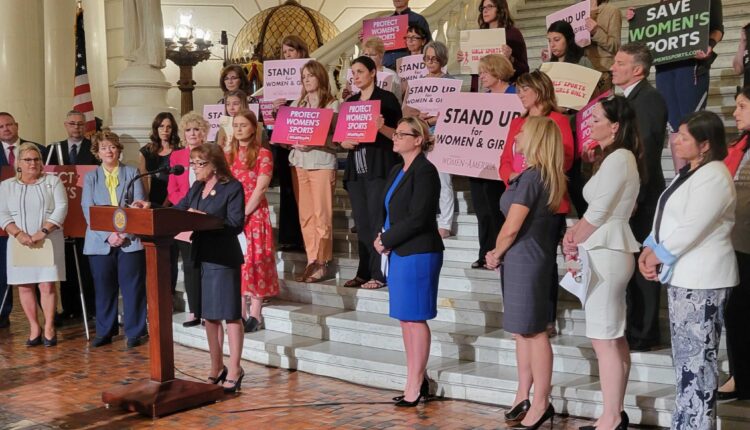 The Republican-controlled Pennsylvania Senate — after more than an hour of debate on Tuesday — approved legislation prohibiting transgender girls and women from participating in girls’ and women’s school sports.

The upper chamber voted 30-20 along party lines to send the proposal to the House of Representatives for consideration.

“This legislation is about providing these girls with that fair shot to stand at the top of the podium to celebrate their significant achievements as a result of their hard work,” Sen. Kristin Phillips-Hill, R-York, one of the bill’s authors, said on the Senate floor.

Sen. Judy Ward, R-Blair, another prime sponsor, said the legislation has nothing to do with biological sex and instead argued that it aims to “protect” fairness in girls’ and women’s sports.

While Republicans staked their comments on creating fairness in sports, Democrats in the chamber argued that the legislation would isolate transgender people.

More than a dozen states — largely controlled by Republicans — have enacted laws or introduced proposals that limit transgender people from participating in school athletics. The Senate Education Committee voted along party lines last month to send a companion House bill to the full chamber for consideration, but it has yet to see a floor vote.

Just hours before the vote, state lawmakers and advocates gathered in the Capitol’s main rotunda, calling on Gov. Tom Wolf to sign the legislation, which would ban students from participating in sports consistent with their gender identities, if it makes it to his desk.

“Our House Bill 972 ensures fairness for all and preserves athletic opportunities for women,” state Rep. Barbara Gleim, R-Cumberland, said. “I ask the Senate to pass this bill for the sake of competitive women’s athletics in Pennsylvania. And when they do, I ask our governor to protect women and women’s rights under Title IX and signed the bill.”

Advocates cited University of Pennsylvania swimmer and NCAA Division I champion Lia Thomas as an example of why the bill’s passage is needed. Thomas became the first transgender woman to win an NCAA swimming championship earlier this year.

Though Thomas followed NCAA and Ivy League rules since beginning her transition in 2019 by starting hormone replacement therapy, she faced accusations of having an unfair athletic advantage.

“It is unfortunate that this bill is even necessary,” Dilonna Coran, executive director of Concerned Women for America of Pennsylvania, a group promoting biblical values, said. “But what is happening in female athletics today has made it essential.”

Wolf, who leaves office in January 2023, has vowed to veto legislation restricting transgender athletes from competing in sports complying with their gender. Attorney General Josh Shapiro, the Democratic nominee for governor, called the House legislation “nothing more than cruel, designed to discriminate against transgender youth who just want to play sports like their peers” earlier this year.

Sen. Doug Mastriano, R-Franklin, who is the GOP gubernatorial nominee, attended Tuesday’s press conference and has voiced support for the measure in the past.

Speaking on the Senate floor Tuesday, Mastriano added: “This is about fairness. It’s about removing male domination of female sports. It’s about doing the right thing.”

A 2014 Pennsylvania Interscholastic Athletic Association policy, which governs competitive primary and secondary school sports in the commonwealth, gives an “equal opportunity” to all student-athletes, without regard for race, gender, and other characteristics.

The policy, which also allows for co-ed sports, states that “where a student’s gender is questioned or uncertain,” the principal has the final say on if — and with whom — the student can play sports.