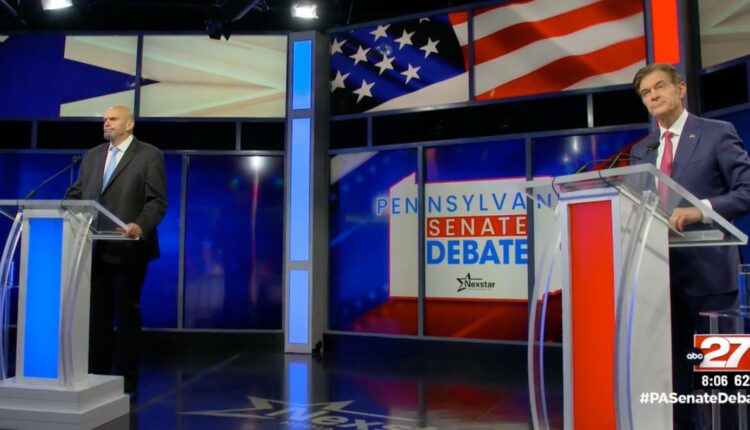 The soundbites have been bitten. The blows have been exchanged. And with that, the first (and most likely only) debate of Pennsylvania’s nationally watched U.S. Senate race is officially in the books.

According to RealClear Politics, Democrat John Fetterman, Pennsylvania’s sitting lieutenant governor, went into the night with an average 1.3 percentage point lead over Republican Mehmet Oz, the celebrity surgeon with the Trump endorsement.

RealClear Politics has rated the race to replace retiring GOP U.S. Sen. Pat Toomey, of Lehigh County, a toss-up. And with less than two weeks to go, the prognosticating website is projecting that Republicans will keep the seat in a year in which the winner likely will determine control of the 50-50 chamber.

Fetterman, who suffered a stroke in May, went into Tuesday night with much to prove — even as his campaign released a statement attempting to downplay expectations.

For Oz, a longtime New Jersey resident who has faced accusations of carpet-bagging, it was a chance to demonstrate his Pennsylvania bona fides and to show that he could tell his Perkasies from his Pittsburghs.

How’d it go? Three takeaways below.

It didn’t take long for Fetterman and Oz to start shouting over each other, particularly during exchanges over law and order issues, where Oz, thanks to a barrage of television advertising, has sought to paint Fetterman as soft on crime.

“Violence skyrocketed in Braddock. People kept leaving. The city was dangerous under your leadership,” Oz jabbed at one point, referring to Fetterman’s tenure as the mayor of the western Pennsylvania borough.

During a discussion on higher education, Oz poked Fetterman again in what appeared to be a reference to his ongoing recovery, “Obviously, I wasn’t clear enough for you to understand this,” USA Today noted.

During an exchange on abortion rights, Fetterman loudly interjected, “You roll with Doug Mastriano,” referring to the Republican gubernatorial nominee, who opposes abortion, and has said he would sign an exception-free bill banning it at early as six weeks.

During an exchange over the minimum wage, Fetterman said “He [Oz] really hasn’t had any answer. He doesn’t want to talk about someone having a living wage and being able to survive.”

Oz said he believed market forces would drive up the federal minimum, now $7.25 an hour, past the $15 an hour sought by reformers, including Fetterman.

Fetterman also repeatedly brought up what he referred to as “The Oz Rule.”

“If he’s on TV, he’s lying,” Fetterman asserted at the beginning of the debate, as he was asked to state his qualifications for running.

Oz also repeatedly accused Fetterman of obfuscating his own record, particularly during an exchange on whether he supported or opposed fracking.

When asked at first, Fetterman said he supported fracking, the shorthand for the chemical process of extracting natural gas from the ground. When he was confronted with a past public statement when he opposed it, Fetterman remained adamant: “I do support fracking,” he said.

2. There were soundbites, but the specifics were sometimes lacking.

Both candidates were asked how they’d reduce the cost of higher education, and how they’d support vocational and technical education. Neither offered much in the way of specifics.

Fetterman said he wanted to support vocational education, because “college isn’t for everybody.” Asked how he would do that, Fetterman said he supported partnerships with unions, and called for it to be “more affordable.”

Oz called for trimming middle management at colleges and universities and increased access to distance learning, but did not offer policy prescriptions on how he would make that a reality.

During an exchange on immigration, Fetterman called for a “bipartisan solution,” but did not describe what that would look like. Oz castigated the Biden White House for what he described as a “catastrophe” at the border, and called for an end to so-called “sanctuary cities,” but similarly did not offer a policy prescription.

Social media lit up during the exchange over abortion rights when Oz, who opposes abortion, but supports exceptions, said he believed abortion was a matter for “women, doctors, [and] local political leaders, letting the democracy that has always allowed our nation to thrive, to put the best ideas forward so states can decide for themselves.”

Fetterman, who supports abortion rights, reiterated his support for Roe v. Wade, saying he believes “that abortion is healthcare, and I believe that is a choice that belongs with each woman and their doctor.” 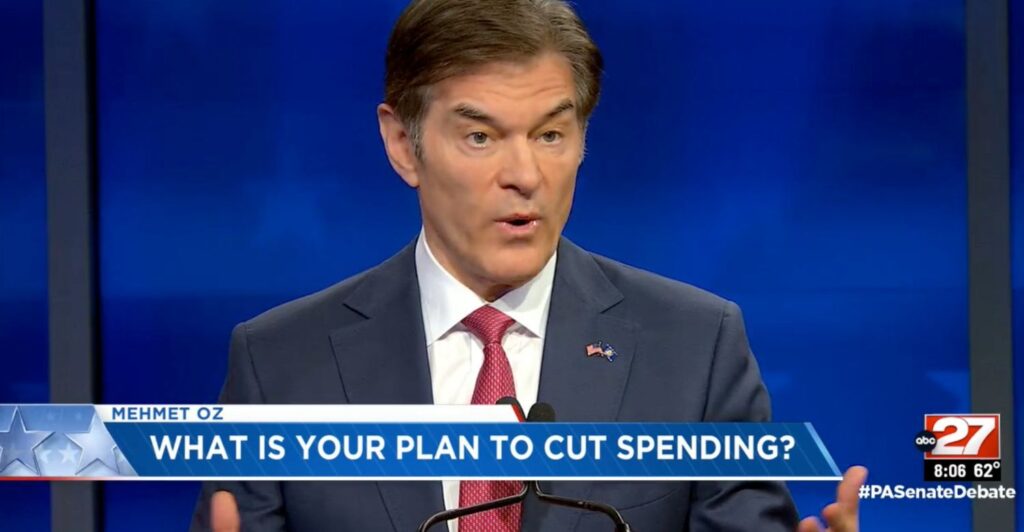 3. The Trump and Biden factors.

Both candidates were asked whether they’d support their respective standard-bearers in 2024.

Oz, who was endorsed by former President Donald Trump during the May primary election, seemed to distance himself from the 45th president soon after securing the nomination.

On Tuesday night, Oz at first said he would support the eventual Republican nominee, and then when pressed again, said he would “support Donald Trump if he decides to run for president.”

But, he added, “this is bigger than one candidate. It’s about how we will build a bigger tent.” Oz skirted a question on whether he’d been paying attention to Trump’s recent legal travails, saying, “I haven’t followed them very carefully … They’ll work themselves out. And I have tremendous faith in the legal system.”

Fetterman, said it would be up to President Joe Biden if he chooses to stand for re-election in 2024. But if “he does choose to run, I would support him.”

Asked whether there were places where he broke with Biden, Fetterman said he believed Biden “does need to do more to fight inflation.” But, he added, “I do believe Joe Biden is a family man and stands for the union way of life.”

Election Day is Nov. 8 — now less than two weeks away.

Ottawa protest inspires talk of copycat convoys in US and beyond