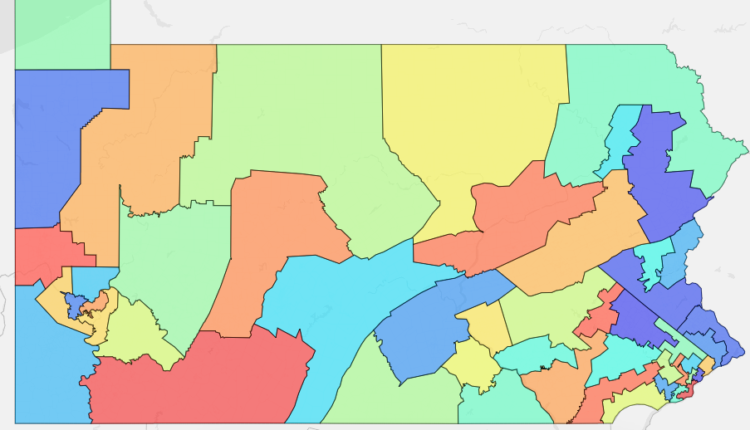 The new maps are a big improvement over the maps from 2012, which were gerrymandered to help the GOP. Unfortunately, the new maps have several significant flaws, and they demonstrate yet again why Pennsylvania needs an independent redistricting commission.

Here are some of the flaws in the LRC maps:

The districts are not compact enough. The new maps are slightly more compact than the gerrymandered 2012 maps, but that’s not saying much. The LRC altered existing districts instead of drawing districts from scratch, so the current maps inherit much of the un-compactness found in the old maps.

Do these districts look compact? (The most compact district would be a circle.)

Not to me. They fail the eye test. They’re all Senate districts in southeastern Pennsylvania, but un-compact districts can be found in other parts of the state as well.

The maps protect incumbents. The LRC drew district borders to reduce the number of incumbents who had to face one another in a primary or run in an unfavorable district. That made some districts less compact. Nowhere is this clearer than the narrow peninsula from Senate district 16 (where incumbent Patrick Browne lives) that juts into district 14, so he does not have to run in heavily Democratic Allentown.

The language in the state constitution establishing the LRC, does NOT mention the need to protect incumbents. Incumbents come and go, but the citizens of the state have to live with the districts for up to a decade and perhaps even longer.

The maps favor the GOP even though Democrats have a statewide registration advantage of almost 600,000 voters. With a 50-50 split in the voting, the Princeton Gerrymandering Project, Dave’s Redistricting application, and Professor John Nagle of Carnegie-Mellon University all predict that the GOP would still control both the House and Senate. Even if they receive a majority of votes, the Democrats could still end up the minority party in both chambers.

How can anyone consider the LRC maps fair when they bake in such an advantage for the GOP, the minority party?

Mike Walsh lives in Gulph Mills, Pa., and works with Draw the Lines PA to promote fair redistricting in Pennsylvania. His views are his own.

One California University Has Unified Town and Gown to Fight Covid. Why Haven’t Others?