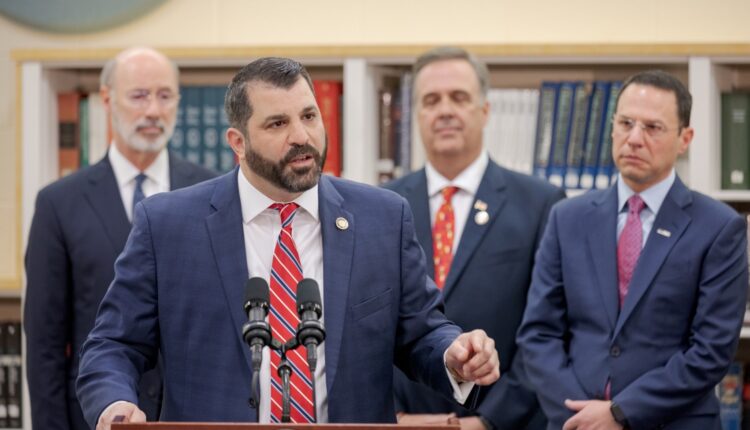 The Pennsylvania General Assembly’s 2023-24 session started Tuesday with the swearing-in of new lawmakers and the resolution of a leadership quandary in the lower chamber.

Defying predictions of a contentious partisan gridlock, the Pennsylvania House of Representatives elected its first independent speaker, Rep. Mark Rozzi, who was re-elected to his Berks County seat in November as a Democrat

Rozzi, elected by a 115-85 vote, said he would caucus with neither party and work with a bipartisan staff to lead the chamber in what he called “the first step toward restoring trust in the people’s House.”

The narrowly divided House began its swearing-in day Tuesday without a clear picture of who would lead it or whether the question would be decided. A motion to adjourn until after special elections scheduled for Feb. 7 failed with a 100-100 vote.

Democrats won a slim majority of 102 seats in November, giving party loyalists hope they would control the lower chamber for the first time in a decade.

The death of an incumbent Democrat before the election and the resignations of two more who were also elected to higher offices after Election Day gave House Republicans a likely-temporary 101-99 majority.

The three vacant seats are in strongly Democratic districts in Allegheny County.

Republicans said early Tuesday that Rep. Carl Metzgar, R-Somerset, would be the GOP nominee for speaker, but Rozzi’s nomination by Rep. Jim Gregory, R-Blair, was also in the works.

“I think what did it for me was when [Rozzi] indicated that he was willing to change to independent,” House Republican Leader Bryan Cutler of Lancaster County said.

Cutler said the narrow margins in the 203-member chamber require both parties to work together and said rules that are more accommodating of the minority party have been in the works since September, noting Democrats’ frustrations last session with unsuccessful attempts to bring legislation stranded in committees to the floor for votes.

“I think that’s good news for residents of Pennsylvania because [Rozzi has] pledged to work with both sides, which is exactly what I tried to do when I was majority leader. When I ran the calendar, we ran a whole host of bills, both Republican and Democrat,” Cutler said, noting that the composition of the House after the special elections is likely to be evenly divided between the parties.

In the GOP-controlled state Senate, 13 Republicans and 12 Democrats were sworn in to begin their four-year terms.

Republicans, who still control the Senate after winning a 28-22 majority in the November election, welcomed five new members. The minority party had one new member join its ranks in the upper chamber.

At 28 years old, Sen. Nick Miller, D-Lehigh, became the youngest member to serve in the state Senate, winning his election in a new district created during the most recent redistricting process.

“As a fifth-generation Allentown resident, I’m proud to step into this leadership role for our region and join the Pennsylvania state Senate,” Miller said. “Since I was young, my mother, who is also a public servant, instilled in me the importance of giving back to our communities and serving others.”

“As we look forward, I’m hopeful that we can together put Pennsylvania on the greatest path to prosperity possible,” Ward said in her first speech as the chamber’s highest-ranking member.

On Tuesday, Ward supported tapping into Pennsylvania’s “energy abundance” to create jobs and energy independence. Ward, who received a breast cancer diagnosis and underwent a double mastectomy in 2021, also expressed a commitment to legislation that helps with the early detection of breast cancer. She also vowed to “fight for the constitutional authority” of the Senate.

“We are not all the same party or ideology, but we are all here for one basic reason — to make change for the betterment of the people we represent,” she said. “And we are blessed to have been given the opportunity to do that.”