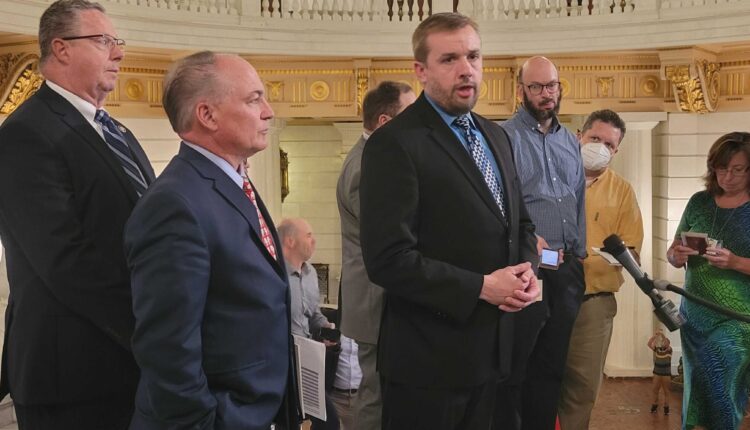 Pa. House approves $45.2B budget, sends it to Senate

The Pennsylvania House of Representatives on Thursday passed a roughly $45.2 billion budget plan that includes an $850 million increase for K-12 school districts and more money for mental health and environmental protection.

The vote on the general appropriations bill — touted as a bipartisan compromise that invests in people and the future of the commonwealth — passed by a 180-20 vote and now heads to the Senate.

The proposal would increase spending by 2.9 percent over the 2021-22 budget and pay down $2 billion in debt while growing the rainy day fund to $5 billion, preserving $3.6 billion of the state’s surplus for future budgets.

House Appropriations Chairperson Stan Saylor, R-York, said on the House floor that the package is the most comprehensive fiscal plan he has seen in his 30 years in the Legislature. Saylor, who lost a primary challenge, will leave the House at the end of the year.

“I want to thank all four caucuses for working together to put us in a fiscally responsible position for moving forward,” Saylor said. “This is a comprehensive budget that puts the needs of people before the needs of government.”

“This is really a reflection of what we’ve been working on throughout the session with some of our priorities — economic recovery, getting people back to work, [strengthening] our schools, strengthening families, and [keeping] our communities safe,” House Majority Leader Kerry Benninghoff, R-Centre, said.

The $45.2 budget plan the House approved Thursday is a 2.9 percent increase over current, approved spending. It includes:

Benninghoff said the plan also adheres to the Republican leaders’ goal of presenting a fiscally responsible budget to Gov. Tom Wolf by reserving some of the state’s federal pandemic assistance money.

“We pepper that over several budgetary cycles, which has enabled us to be in the position we are now,” Benninghoff said.

Wolf’s spokesperson, Elizabeth Rementer, said the governor urged lawmakers to continue working to get a budget to his desk.

“We’re pleased that the House has put forth this bipartisan plan, which includes the governor’s call for historic increases to education and focuses on other key areas that the governor has prioritized in his own budget proposal,” Rementer said in a statement.

The ranking Democrat on the House Appropriations Committee, Matt Bradford, of Montgomery County, said the proposal is an example of the opportunities for bipartisanship in the General Assembly and corrects poor budget practices of the past.

“It is something that anyone who calls themselves a conservative, Democrat or Republican, can be proud of,” Bradford said.

While he expected some Democrats to say the budget doesn’t go far enough with investments in education and human services, he said it provides a sustainable increase in spending.

“If you want to make these investments I would say to my most strident Democratic friend you have to be able to sustain them in the inevitable economic downturns,” Bradford said.

“This budget sets us up on a path to be more attractive to our job creators large and small,” Saylor said.

Small businesses would also receive additional tax credits in the form of expense deductions for investments in equipment and growth and by allowing them to carry forward tax liabilities for gains on property transactions.

The budget proposal also includes a phased reduction in the corporate net income tax from 9.99 percent to 4.99 percent over the next nine years.

“This is a budget that prioritizes investments in people, not big government,” Saylor said.

Although the $525 million increase in basic education funding is less than half of Wolf’s $1.2 billion proposal, it is nonetheless a historic boost in state assistance for Pennsylvania public schools, education advocates have said.

It also increases Level Up funding for the state’s 100 neediest school districts by $225 million and special education funding by $100 million. One-time grant programs for school security and mental health investments would each receive $100 million.

The Pennsylvania State System of Higher Education would receive a $75 million increase in general fund money and $125 million in pandemic funding to pay for the ongoing process of integrating its campuses.

Erica Clayton Wright, a spokesperson for Senate Majority Leader Kim Ward, R-Westmoreland, told the Capital-Star that the GOP caucus is going through the spending plan line by line.

“We want this as much as everyone,” Clayton Wright said, adding that they want to do it right.

KHN’s ‘What the Health?’: A Chat With the Surgeon General on Health Worker Burnout